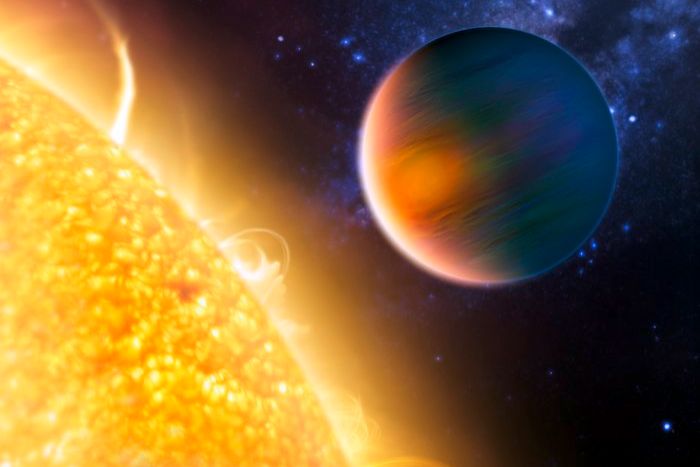 An alien planet has been detected with a highly unusual orbit that resembles the path of a comet. Photo: ESA, NASA

It is on a trip that will come to a fiery end in the not too distant future, cosmically speaking.

The new planet, known as HD76920b, is four times the size of Jupiter and orbits a star much larger than our Sun, nearly 600 light years away in the constellation of Volans — also known as the flying fish.

Most planets we find around other stars have relatively circular orbits, but this planet’s orbit is more like that of a comet, said study co-author Jonti Horner of the University of Southern Queensland.

The doomed planet almost skims the surface of its star before heading out almost twice the distance Earth is from our Sun before heading back in again.

“So it moves on a very, very extreme elongated orbit,” said Dr Horner, adding the huge variation in radiation it was exposed to would take its toll.

“This is a planet that we would not consider life to be found on … but that doesn’t mean it’s not a really interesting planet.”

A team led by Robert Wittenmyer of the University of Southern Queensland found the planet circulating the old giant HD76920, which is more massive and two billion years older than our Sun.

The research is published on the pre-press website Arxiv.

How did this planet get its weird orbit?

Planets with elongated orbits have been found before, but not around a very old star at the end of its life.

“It’s the first time we’ve found a planet on an orbit anything like this around one of these evolved stars,” Dr Horner said.

“And that’s really interesting and exciting to us, because it tells us something about how planets form and how they interact with one another.”

The strange thing about planets with eccentric orbits is that they never occur in systems with other planets.

Dr Horner said there were at least three schools of thought about how these loner planets with weird orbits came to be.

One is that they formed in a system with two or more stars, which would eventually throw the planets off their orbits.

The second is that some of them are actually failed stars — they formed the same way that stars do, but failed to grow enough to begin to shine.

The final hypothesis is that the planets were originally moving in circular orbits but at some point, the system went haywire, flinging one planet off course, and ejecting all the others.

“So they’re probably now rogue planets floating through the depths of space on their own,” Dr Horner said.

“There are no other stars, there’s no other big planet or object [like another star] obviously further away that would have caused it to become this eccentric,” said Dr O’Toole of the Australian Astronomical Observatory.

But whatever happened to this system, the extreme eccentricity of a planet’s path indicates it happened very recently since more established planets have more circular orbits.

The astronomers detected the movement of the planet by analysing the light wavelengths coming from HD76920.

Dr O’Toole said it would be interesting to actually observe the planet transiting across its star.

“It would be a hard observation to make given the whole lot of properties of the planet and the star but definitely worth a try.”

How will the planet die?

According to calculations by the researchers, the planet only has about another 100 million years left before it is devoured by its expanding star.

Over time the tidal pull between the star and the planet will make the orbit become more circular until the planet is zooming around just four times the distance away from the star than the star’s radius.

Then the planet will become locked to the star — just like the Moon is to the Earth — so only one side faces the star.

“Then what’s going to happen is the star’s just going to gradually expand and devour the planet. And then it will be no more,” Dr Horner said.

Dr O’Toole said given the eccentricity of the orbit, it’s impressive that the planet has survived as long as it has.

“I love the fact they calculated when the planet would be basically engulfed by the star that it orbits,” he said.