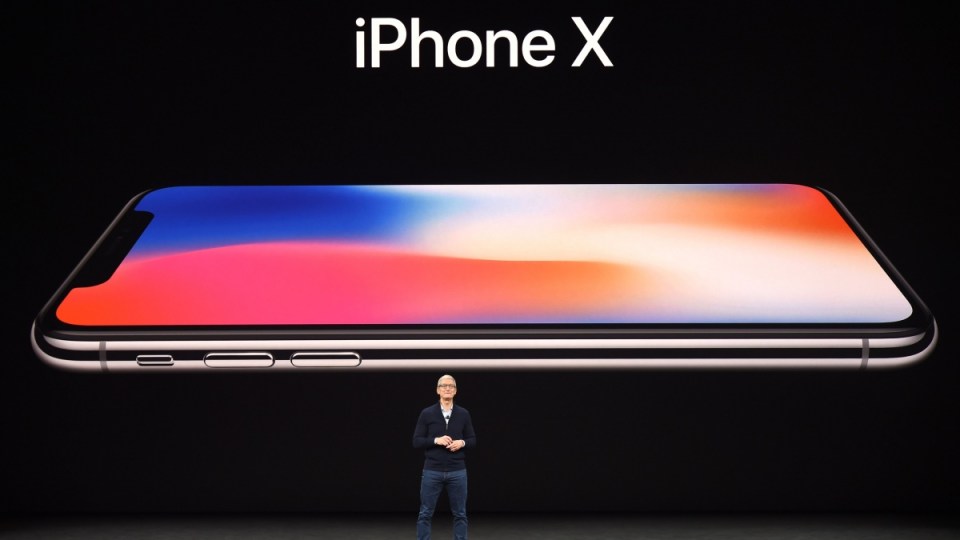 The Apple iPhone has lost its home button, has a wrap-around screen and a hefty price tag in what the IT giant calls “the future of the smartphone”.

While the new iPhone 8 models represent incremental updates to the iPhone 7, the iPhone X (pronounced iPhone 10) incorporates a major redesign.

“It is all screen. It is beautiful to look at and incredible to hold,” senior vice president of worldwide marketing Phil Schiller said Wednesday morning.

“Our teams have been hard at work for years on something that is important to all of us: the future of the smartphone,” Mr Cook said.

“It is only fitting that we are here in this theatre on this place to reveal a product that will set the tone for the next decade,” he added.

“This is iPhone 10 — the biggest leap forward since original iPhone.”

Mr Schiller ran the audience through the new iPhone 8, iPhone 8 Plus and iPhone X.

The iPhone X, like the iPhone 8, featured glass on the front and back, using a surgical-grade stainless steel band around the sides.

It is water and dust resistant and will come in space grey and silver.

Both handsets models are powered by a new A11 Bionic processor; a six-core processor containing Apple’s first ever GPU.

“The level of quality and responsiveness and efficiency is a breakthrough in mobile displays,” he said.

The 5.7-inch display will offer 2436 x 1125 resolution, HDR in both Dolby Vision and HDR 10 and will included OLED technology.

“The first OLED display great enough to be in an iPhone,” he said.

The home button has been removed and replaced by simply swiping up the screen; either from the lock screen or within an app.

Swiping up and pausing will yield the app switcher.

“Once you do it for the first time, you’ll know there’s never been a better way,” he said.

The actual prices charged to Australian customers will probably be even higher.

The dual 12MP cameras in the iPhone X feature dual optical image stabilisation, with a wide-angle f1.8 lens and a telephoto f2.4 lens. This will offer improved low-light handling.

This feature recognises a user’s face through a new ‘true-depth’ camera system.

Combining a variety of sensors with specialised hardware, called a neural engine, Face ID is used to unlock your phone, and authenticate ApplePay purchases and third-party app features.

This facial information is contained on the handset only and never communicated with Apple HQ. It can also be used in conjunction with the usual passcode.

Simply record your facial expressions and send the Animoji to do the talking for you. It’s actually pretty cute.

Face ID will also lift your SnapChat game, mapping facemasks to your face with amazing detail.

Hardware and software improvements have also meant an improvement in battery life, giving you two more hours than iPhone 7 every day.

iPhone 8 Plus features the dual camera introduced with iPhone 7 Plus: a wide-angle f1.8 lens and a telephoto f2.8 lens.

Moving in line with a number of competitors, the new iPhone models feature wireless charging – compatible with the Qi standard found in a number of third-party chargers and devices.

AirPower, a new Apple wireless charging matt, allows iPhone, Apple Watch and AirPods to be charged on the one device, meaning you won’t need a plethora of cables running across your bedside table.

AR features will also come to iPhone 8, thanks to the new GPU and A11 Bionic chips. This feature will open up a world of realtime and realworld information and gaming.

Imagine a star map superimposed onto a nighttime sky, or a game projected in virtual reality onto your coffee table.