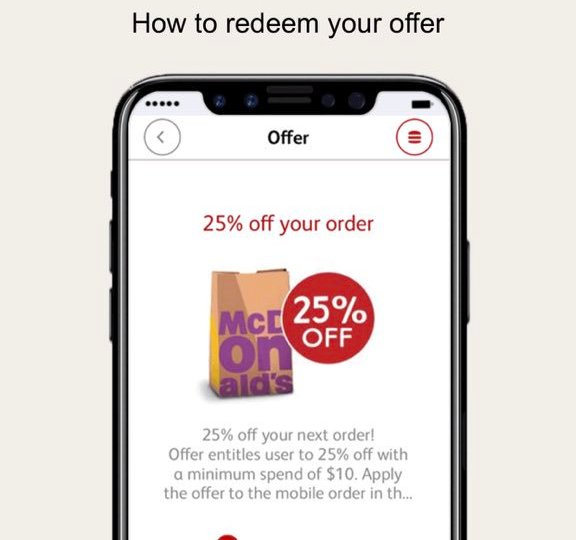 McDonalds may have just leaked the design for the much anticipated iPhone 8. Photo: Twitter

An Australian-based McDonald’s promotion has caused a frenzy after a phone featured in an email advertisement drew a great resemblance to an iPhone, raising questions as to whether it could be the iPhone 8.

Australian subscribers received the email featuring a number of screenshots of a phone with an edge-to-edge display, promoting the My Maccas app and a discount offer.

The phone appeared to have a front-facing camera, proximity sensor, 3D face-scanning camera and speaker, but no home button was visible.

McDonalds Australia spokesman Chris Grant told The New Daily the featured phone was not the iPhone 8 or any other phone on the market.

“We created a mock-up of a phone screen to showcase the functionality of our My Macca’s mobile ordering app,” he said.

“Any similarity to any other design is purely coincidental.”

Mr Grant denied that the phone’s resemblance to an iPhone was part of a publicity stunt.

He did not respond to The New Daily‘s request to confirm how many McDonalds customers received the email.

Here’s a closer look at the McDonalds promotion emailed to subscribers:

(They took my render) pic.twitter.com/5gPJccVh1C

Many customers expressed their excitement online at the possibility of a sneak peak at the new iPhone’s design ahead of its launch.

However, the experts were far more sceptical as to the authenticity of such speculation.

University of Western Australia’s David Glance, the director of the Centre for Software Practice, told The New Daily he had his doubts about the McDonalds’ phone image.

“The Australian McDonalds gets its hands on an iPhone 8 — don’t think so,” he said.

“Right now there are all sorts of rumours about there being an iPhone 7S (same form factor as now) and a larger iPhone 8 with the new design, but I really don’t think anyone knows.”

Apple was contacted for comment but did not respond by deadline.

It is understood Apple will release its much-anticipated next generation iPhone as soon as next month.

This has come three weeks after Apple mistakenly released the software code revealing the newest features for the iPhone 8.

It was described as the biggest leak in Apple’s history – and it came from Apple itself.