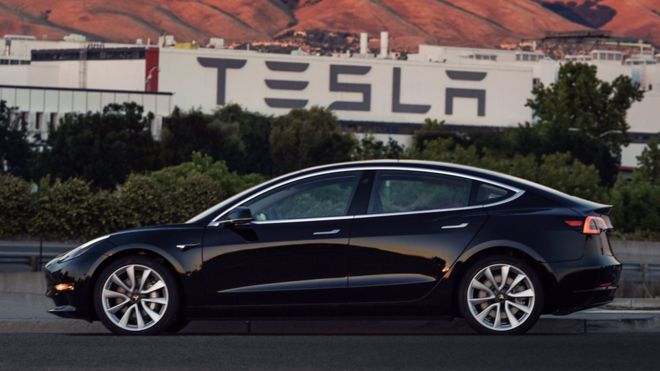 Elon Musk has tweeted the first images of the new Model 3. Photo: Twitter

Musk announced on Sunday in a series of tweets the first Model 3 had rolled off Tesla’s assembly line, with accompanying pictures snapped outside the Tesla factory site in California.

The new five-seat vehicle will have an acceleration from 0-to-100kmh in just under six seconds, and can travel at least 345 kilometres on a single charge.

It also has autopilot capabilities including auto lane-change, smart summon (which brings your car to meet you) and automatic emergency braking.

Last week, Musk noted that 100 Model 3 cars would be produced in August, before increasing to 1500 by September and no less than 20,000 produced per month by December.

Tesla has received about 400,000 pre-orders for the new model, with estimations of delivery for new reservations to occur in late 2018.

Australians will have to wait at least nine months before they can get their hands on right-hand drive models, Musk tweeted.