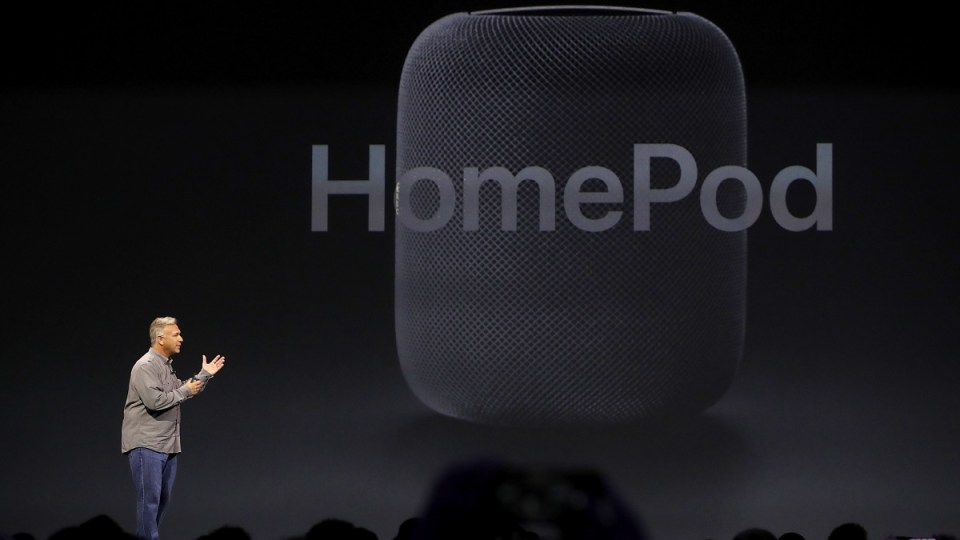 Apple has entered the home audio arena with one simple aim: “to rock your house”.

Packing a 4-inch subwoofer and seven tweeters, HomePod is powered by an A8 chip (from iPhone), which tailors individual audio signals to your environment, delivering rich, full sound, regardless of the room.’

Apple’s invasion of the home entertainment market was announced Tuesday morning in the US along with a range of upgrades to iMac and MacBook Pro, a new iPad Pro tablet and major updates to operating systems across every Apple device

The tech giant is looking to add its phone functionality to the living room with HomePod, which is also integrated with Siri and Apple Music, giving you total voice command of your music collection.

Want to know who’s singing on a track? Just ask Siri. Want to listen to something new? Just ask, you guessed it, Siri!

This voice feature extends into other Apple OS features; be it Home Kit device control, responding to Messages, or setting Reminders.

HomePod will be available later this year.

Other major announcements at the Apple World Developers Conference include:

The recently launched Apple TV ‘TV’ app, which combines a plethora of streaming media services into one handy portal, welcomes Amazon Prime to the Appleverse – great news for early adopters in Australia who jumped on Prime when it launched a few months back.

Version 4 of Apple’s smartwatch OS introduces a new Siri watch face: an intelligent face that offers information based on your location, appointments, what have you. Tap the face to reveal relevant information, then twist the crown to reveal further details of your day.

New watchOS, new watch faces! The new Kaleidoscope face is a trippy way to explore your watch complications; or choose a favourite photo and give it the Kaleidoscope treatment. Joining Mickey and Minnie Mouse watch faces are Toy Story characters Woody, Jessie and Buzz Lightyear.

Workout features have some simple improvements. You can now combine multiple workouts into a single session, with the simple press of the ‘+’ sign.

Websites with audio and video autoplay can now be switched off; and improved Intelligent tracking prevention reduce the amount of data websites you visit feed back to online sales companies.

Improvements to Photos make it easier to navigate your collection and edit photos, as well as sync data (names, locations etc) across devices. Extra retouching features, like curves, will please many photographers.

Just when you thought 5k was the ultimate display, the new iMac features a display that is 43% brighter than it predecessor.

The latest Intel Kaby Lake chips, which not only offer power and speed of processing, but improved RAM capacity, will come in every new iMac configuration… at last!

The power of VR was demonstrated by John Knoll, from Industrial Light & Magic, who guided the audience through a live exploration of the planet Mustafa, from Star Wars. Chills, ladies and gentlemen. CHILLS.

MacBook Pro users, don’t fret, because the MBP is also getting processor upgrades across all models, which is about time.

A sneak peak of Apple’s new Pro-level 5k, 27-inch desktop machine brought many gasps of wonder from the audience. This new machine will be the most powerful Mac ever built.

Processor options go from WOW to HOLY HELL: choose from an 8-core, 10-core or 18-core Xeon processor. The Radeon GPU is also configurable to yield up to 22 Teraflops of power, offering super-fast code compiling in a small desktop package.

Messages has been given an interface redesign, making it easier to personalise your messages. Message threads now automatically sync across devices as you transition to a new throughout your day.

Person-to-Person payments, via Apple Pay, now gives users easier ways to use their money. This feature finds great use in the Messages app, allowing users to send money via a simple message.

New voice, new interface – Siri has it all! Not only does the iOS 11 version of Siri sound more natural than ever, but also supports translations. Simply ask Siri to translate a phrase, and he/she will read it aloud. Great for travellers.

Improvements to the Camera app bring increased compression to both video and photos, reducing the amount of space used on your handset to store media. The Photos app has also been given a shot in the arm, with the addition of editing features for Live photos (think: Boomerang) and improved Memories playback.

Control Centre (swipe up from the bottom of your screen) now appears on a single screen, and utilises 3D Touch to access deeper features.

Maps now features detailed interior floor plans of buildings, such as shopping centres and airports, as well as lane guidance for navigation.

For CarPlay users, a new Do Not Disturb While Driving feature detects when the iPhone is docked in a moving vehicle and literally goes dark – no calls, alerts or messages will come through, unless they meet emergency conditions.

A major redesign of App Store brings a more natural way to discover apps, via themed feeds, and navigate easily to your favourite sections, now contained within tabs.

A new 10.5-inch iPad Pro fits a larger screen into the same footprint as the existing 9.7-inch model. This increase in screen real estate gives users a full-sized on-screen keyboard, ideal for those who use iPad as their hero mobile device.

An update to iOS for iPad brings the Dock to Apple’s tablet, along with a new app switcher and Drag-and-Drop. These features finally bring file management on iPad on par with desktop computing. If you’ve been holding off moving to a tablet for this reason, now is your time.

Apple Pencil fans have been spoiled with a host of improvements to Markup and Notes, including handwriting recognition and inline drawing and text, plus a powerful document scanner that makes digitising your physical world a breeze.

Apple looks to invade your living room and ‘rock your house’