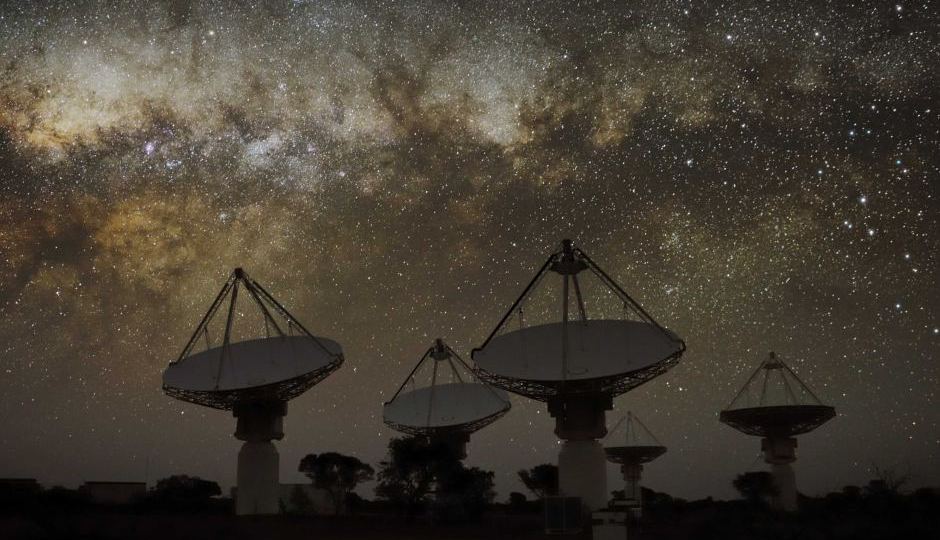 The FRB detected by the ASKAP near Geraldton is one of just a few dozen discovered by astronomers. Photo: CSIRO

Astronomers could soon be able to pinpoint the origin of mysterious fast radio bursts (FRBs), after a new telescope in Western Australia detected one after just four days of searching.

What causes them is unknown, but hypotheses range from exploding stars to emissions from extra-terrestrial spacecraft.

FRBs were first detected in 2007 after historical data from the Parkes telescope was reviewed, but just 24 have been found in the following 10 years.

But astronomers anticipate that number will increase dramatically with the Australian Square Kilometre Array Pathfinder (ASKAP) near Geraldton, 400 kilometres north of Perth, expected to detect FRBs every two to three days.

Doctor Keith Bannister from the CSIRO, who discovered the burst at ASKAP in January, said the origins of FRBs were very hard to map.

“What makes [them] so exciting is that they, as far as we can tell, come from far, far away,” he said.

“They’re not coming from our own solar system, or stars in our own galaxy. They’re coming from well outside the Milky Way, halfway across the universe.

“The real prize is to pinpoint where they come from. Almost all FRBs we have discovered to date, we only know very roughly what part of the sky they came from.”

The CSIRO wants to develop the capability to pinpoint the origin of individual bursts to particular parts of the universe, which would help determine how far the radio waves had travelled before reaching earth.

“Once you do that you can say if it came from this galaxy, is there anything special about that galaxy,” Dr Bannister said.

“Is it nearby or is it far away? Is it a blue galaxy or a red one?

“And that will help us really understand the physics of what these things are.”

Astronomers might still be searching for the origin and cause of FRBs, but that does not mean they are not already providing information.

FRBs are comprised of different lengths of radio waves, which all travel at different speeds depending on what they hit on their way through space.

Dr Bannister said these speeds could be used to measure how much matter was between Earth and the source of the burst, ultimately allowing astronomers to weigh the universe, and detect dark matter.

Dark matter accounts for about a quarter of the universe, though what it actually is remains a mystery.

“Astronomers have terrible trouble finding so much of the matter in the universe, and these fast radio bursts, are the only thing we have at the moment that can measure the amount of matter in that particular way,” he said.

“If we can find lots of them and pinpoint them to the galaxies we know they’re coming from, then we have a really great way of measuring along lots of different lines of sight, how many electrons there are.

“With that we can find out where some of the dark matter is.”

Labor victory fires up Tamil family’s hopes of return to their Biloela home
Joe Biden says he’s not fussed by North Korea’s rumoured return to nuclear tests
ACTU hails Labor’s triumph as the first step to pay raises
Analyst: Sharemarket will be anxious about a Labor pact with Greens
French foreign minister hails defeat of Morrison and his ‘notorious incompetence’
Tiger Woods quits PGA tournament after the worst round of his career
NASA astronauts to take emergency spacewalk
Today's Stories