Imagine travelling between Sydney and Melbourne in just 50 minutes, at the speed of sound.

That is the dream of Melbourne’s RMIT University students who have designed a “Hyperloop pod” prototype, which was unveiled on Monday night and will go to the SpaceX Hyperloop competition in California in January.

A 30-strong team of engineering students make up VicHyper and hope their design could one day carry people and cargo at 1200 kilometres per hour.

An 11-hour train journey or 90-minute flight between Melbourne and Sydney would instead take just 50 minutes.

Dubbed “the fifth mode of transport”, the Hyperloop system uses an elevated, tube network held at a near vacuum, utilising magnetic levitation and linear induction motors. 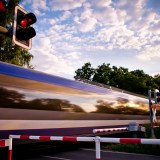 High-speed rail project is on a slow track 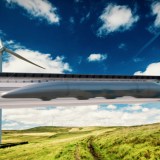 The VicHyper is the only team in the southern hemisphere to be selected for the competition, beating 1700 teams globally to make the finals.

Their human-scale pod will be tested against 29 other teams, judged on maximum speed.

So far the VicHyper design has only been tested using virtual reality, but there are plans to build a test track in Melbourne to test the prototype pod.

‘It will be a safe and comfortable experience’

VicHyper’s founder, 24-year-old aerospace engineer graduate Matthew O’Callaghan, has been working on the project for 18 months,

He said it all started when he was scrolling through the internet looking for an area in technology and innovation to focus on that could “deliver solutions that would help people all over the world”.

Co-founder Zachary McClelland said the Hyperloop was not as “crazy” as it might sound to people.

“All the technology that we’re using on it has already being used in other technology,” he said.

“So we’re just grabbing it from different places and putting it together, and we’re making it work in a different way.”

And he said while the fact that the pods were enclosed might make it sound “scary” to some people, it was safe and it would also be “very comfy”.

“All the technology that we’re using on it has already being used in other technology.”
VicHyper co-founder Zachary McClelland

“And then it’s the beauty of TV screens and virtual reality and augmented reality – we can actually make it like you’re traveling anywhere and have windscreens and all, so it’ll be a very comfortable ride.”

The breaking subsystem already won an award in the semi-finals in January this year.

The Hyperloop competition was the brainchild of US billionaire and technology innovator Elon Musk, who came up with the idea when he was stuck in traffic.

“It’s just a low pressure tube with a pod in it that runs on air bearings, on air speeds, with an air compressor on the front that’s taking the high pressure air build up on the nose and pumping it through the air skis,” Mr Musk said.