Apple has progressively updated its iconic iPhone, but a two-screen model would break the mould. Photo: Getty

Days after Apple urged iPhone and iPad users to update their iOS software following a spyware attack, rumours are firming of a September 7 launch date for the iPhone 7.

The tech giant is expected to hold its annual September gala event on the 7th, where the newest iPhone will be revealed, Forbes reported.

Apple has been notoriously secretive about the specifications of the new phone, but for the best part of 18 months small details have been trickling out about the handset.

Two of the biggest changes that tech insiders expect to see on the iPhone 7 and iPhone 7 Plus are a larger camera (dual lens on the 7 Plus), and the lack of a 3.5mm headphone jack. 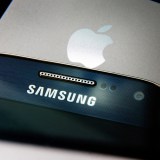 The Forbes report claimed that the iPhone 7 and iPhone 7 Plus would be available to pre-order on September 9.

Tech release date expert Evan Blass said he was “very confident” the new phone would be available from retailers across the world on September 12.

Other reports said that date would be September 23.

On Friday (AEST), Apple showed it was doing everything it could to ward off cyber attacks, when a phone in the United Arab Emirates was breached by a sophisticated cyber weapon made by a private Israeli firm.

The iPhone 7 and iPhone 7 Plus will look quite similar to its predecessor at a glance. Changes are expected however.

The grey antenna strip which sits across the middle of the phone will go around its edges on the iPhone 7 and 7 Plus.

The iPhone 7 camera will have a much larger diameter and the 7 Plus will have a dual lens.

It has been rumoured that this means the 7 Plus would have an optical zoom camera, but this was unconfirmed.

Photos of handsets thought to be of the new phones also had no 3.5mm headphone jacks. Instead the charging port would double as a headphone jack.

The iPhone 7 would most likely have better battery life, but it was unknown if this would apply to the 7 Plus.

Purportedly leaked photos also showed no mute button on either of the handsets. This means that users cannot toggle between silent and loud modes from the button on the edge of the handset.

There will be no 16GB version of the iPhone 7, tech reporter Joanna Stern from the Wall Street Journal confirmed.

Apple may also scrap the push-in home button in favour of a home button which uses “Force Touch” technology, according to a Cowen and Company analysis.

There was also speculation about whether there would be more Apple mobiles other than the iPhone 7 and iPhone 7 Plus, but detail of this could not be confirmed.

iPhone 7 to be released within days: reports