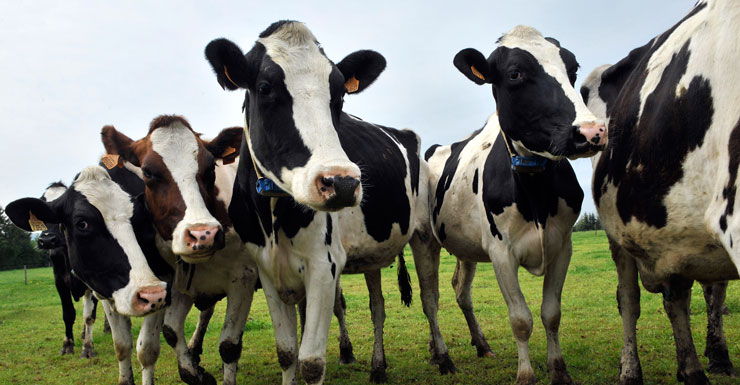 Cautious cows will keep watch on potential threats with their left eye, according to a new study that could help cattle breeders reduce stress and anxiety in livestock.

The study of a cow’s predominant eye which it uses while interacting with other cattle and humans could provide valuable insight into a cow’s emotional temperaments, the study revealed.

University of Queensland Centre for Animal Welfare and Ethics director Clive Phillips said the five-year study found dairy cows increased the use of their left eye when viewing threats.

“Cows that predominantly used their left eye in all types of interactions had a more fearful temperament,” he said.

“Dominant cows are less likely than their subordinates to use their left eyes to monitor confrontations with other cows.”

The right brain hemisphere, connected to the left eye, coordinates fight and flight behaviours, according to the study.

The research is based on lateralisation – a divide between the left and right side of the brain that control different processes.

Professor Phillips said cattle were ideal to study because they had highly lateralised use of their eyes, as their eyes are located on the side of their head and the connections to the sides of the brain were more clear-cut than in humans.

The study included work from a group of students, from a range of countries, who initially observed a herd of 233 cows at the university’s Gatton campus.

By watching the dominance of cows in feedlot fights, the study was narrowed to 30 cows which displayed the most extreme traits – both dominant and subordinate.

The team observed cows’ eye movements while walking the creatures down a five-metre-wide dirt track and having a familiar or unfamiliar person stand on the track.

The method forced the cow to either walk on the right or the left side of the track, allowing the researchers to see how the cow would react.

Anxious cows were likely to view an unfamiliar person in the centre of a track with their left eye, while moving past on the right-hand side of the path, Professor Phillips said.

“However, a person in familiar clothing was viewed predominately with the cows’ right eye,” he said.

Heat distribution was also explored to see if any situations caused stress to the animal and therefore increased blood flow to the eyes.

It’s all in the eyes for new farmers

Professor Phillips said the study would serve as a valuable tool for new farmers to identify the level of stress within their herd.

He said while very experienced farmers would claim to know their herd and the behaviours of their herd, the research could be useful for new farmers to ensure their keep their cows calm.

“For researchers, this provides a tool to measure how a cow is responding to particular things in the environment,” Professor Phillips said.

“For farmers it is a tool to help them identify calm cows and breed cows that are more placid.

“Many farmers that have been in the game a long time know their cows extremely well and, for example, they know to handle their cows on the left side where the cow feels more comfortable to view any perceived threat.

All in the eyes: cows’ emotions uncovered in new study