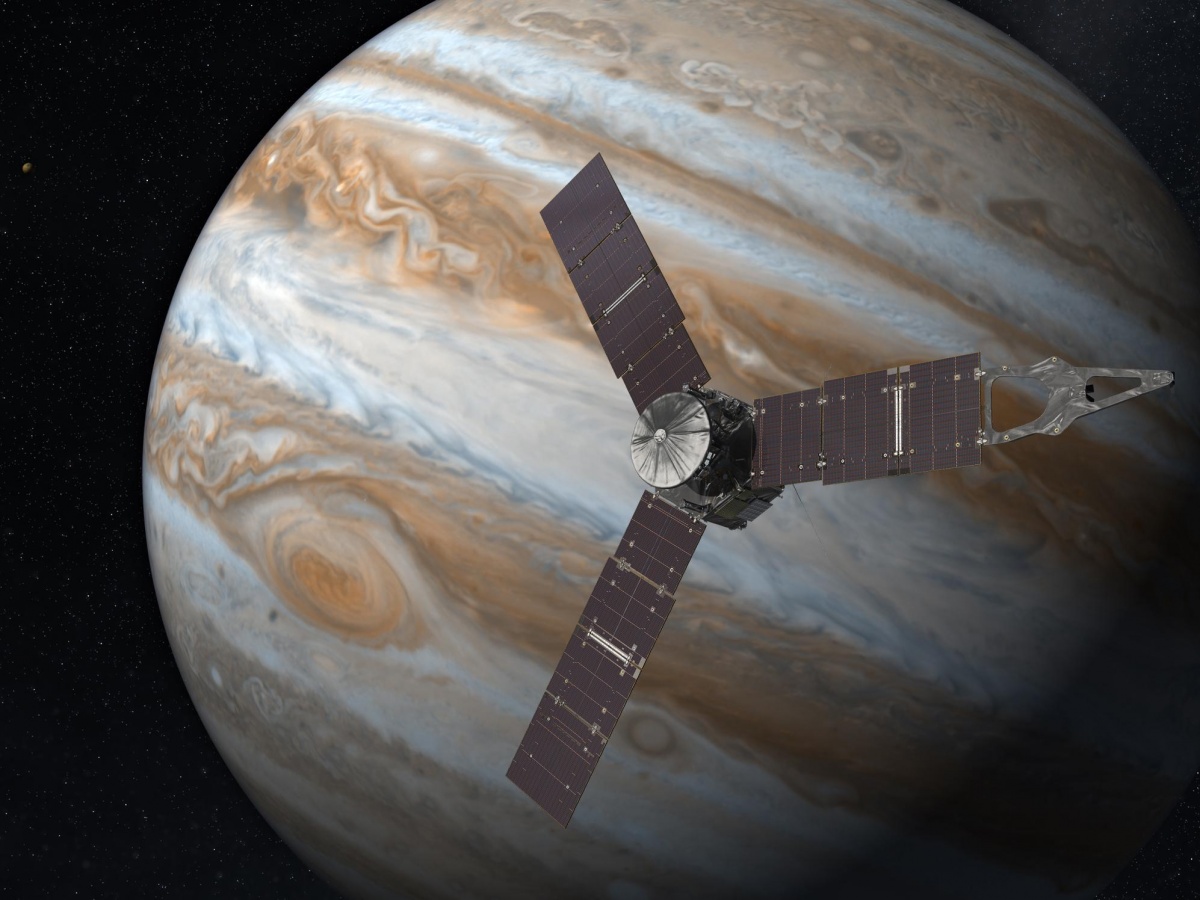 NASA’s Juno spacecraft sent back its first images of Jupiter since entering the gas giant’s orbit ten days ago.

The photograph was taken by the spacecraft’s colour, visible-light camera JunoCam and shows the bright side of the planet facing the sun, complete with its famous Great Red Spot, as well as three of Jupiter’s four largest moons – Io, Europa and Ganymede.

The image was taken on July 10, six days after entering the Jupiter’s orbit on July 4, when Juno was roughly 4.3 million kilometres from the planet’s surface.

“This scene from JunoCam indicates it survived its first pass through Jupiter’s extreme radiation environment without any degradation and is ready to take on Jupiter,” said Scott Bolton, principal investigator from the Southwest Research Institute in San Antonio, Texas.

“We can’t wait to see the first view of Jupiter’s poles.”

The last photo sent by Juno before its tricky entry into Jupiter’s orbit was taken on June 29 before its instruments were switched off, approximately 5.3 million kilometres away from the Jovian world.

Juno was launched on August 5, 2011 as part of NASA’s New Frontiers program and will orbit the planet for 20 months before its mission ends in February 2018.

So, what’s next for Juno, and what have we learned so far, or can expect to learn, about the largest planet in our solar system?

Get ready for more photos

On July 6, five out of the nine scientific instruments on board the basketball-sized Juno were turned on, with the rest to be powered up by the end of the month.

This means the spacecraft, which is completing the first of two 53-day orbits, will be ready to take measurements and high-resolution photographs on its next close approach at the end of August.

“JunoCam will continue to take images as we go around in this first orbit,” said Candy Hansen, Juno co-investigator from the Planetary Science Institute in Tucson, Arizona.

“The first high-resolution images of the planet will be taken on August 27 when Juno makes its next close pass to Jupiter.”

And lots of data

Besides taking stunning photographs of Jupiter and its many moons, Juno will also be taking measurements with its scientific instruments to send back to researchers to study.

This will hopefully help scientists answer questions like: How was Jupiter formed? How much water is in its atmosphere? Does it have a central, rocky core? And what are the properties of the planet’s fierce winds that can reach speeds over 600km/h?

Juno is still moving around Jupiter as part of its ‘capture orbit’ in a highly elliptical fashion, with each circuit expected to take around 53 days to complete.

In October the spacecraft’s engines will start firing so it can enter a 14-day polar orbit that will take it within 5,300km of the gas giant and skim below its cloud tops, allowing its instruments to gather all manner of data.

Juno is expected to complete 37 orbits in total and have been designed to ensure minimal exposure to Jupiter’s dense radiation belts – its strong magnetic field extends out 100 Jupiter radii on the sun-facing side, whereas Earth’s extends out only 10 Earth radii – as well as protection from fierce solar winds and radiation from Io’s volcanic activity.

Juno’s mission will come to an end in February 2018 when it will be de-orbited so it can burn up in Jupiter’s atmosphere.

This will ensure it avoids any possible collision with one of Jupiter’s moons and prevent any biological contamination. Juno is carrying a plaque dedicated to the father of astronomy himself, Galileo Galilei, which was provided by the Italian Space Agency.

It depicts text in Galileo’s own handwriting from January 1610 when observing Jupiter’s moons:

On the 11th it was in this formation – and the star closest to Jupiter was half the size than the other and very close to the other so that during the previous nights all of the three observed stars looked of the same dimension and among them equally afar; so that it is evident that around Jupiter there are three moving stars invisible till this time to everyone.

The spacecraft is also carrying three specially constructed LEGO figurines representing Galileo, as well as the Roman god Jupiter and the goddess Juno.