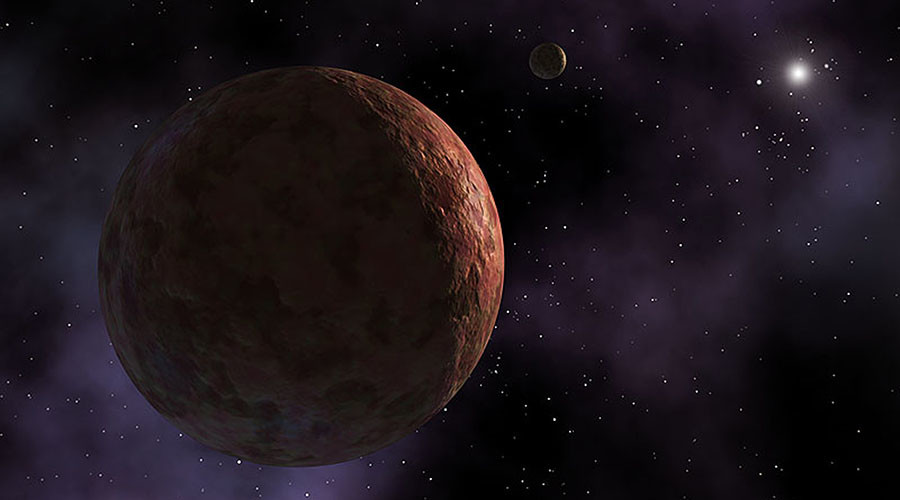 An object orbiting the space beyond Neptune, dubbed 2015 RR245, has been discovered by an international team of astronomers.

The newly discovered object is believed to be a dwarf planet of approximately 700 kilometres in diameter, and has an unusually large and loopy orbit, taking 700 years to travel around the sun.

Scientists said they needed to further observe RR245 before bestowing it with a more impressive name.

It is set to join Pluto – which had its planet status stripped of it in 2006 – Ceres and Eris as a dwarf planet.

The team behind the discovery used the Canada-France-Hawaii Telescope, which sits at the summit of Munna Kea in Hawaii.

The telescope is extremely sensitive to light – and the researchers were careful to point out that the find could actually turn out to be a very shiny, smaller object.

Learn more about the eccentric planet below:

“The icy worlds beyond Neptune trace how the giant planets formed and then moved out from the sun,” said astronomer Dr Michele Bannister of Canada’s University of Victoria in a statement.

“They let us piece together the history of our solar system. But almost all of these icy worlds are painfully small and faint. It’s really exciting to find one that’s large and bright enough that we can study it in detail.”

Researchers first saw 2015 RR245 when it appeared in a sequence of images taken by a telescope for the Outer Solar System Origins Survey (OSSOS) in September 2015.

“There it was on the screen – this dot of light moving so slowly that it had to be at least twice as far as Neptune from the Sun,” said Dr Bannister, part of the team who made the discovery.

Objects need to fill certain criteria to be considered dwarf planets. They need to have a mass great enough that their gravity makes them round in shape, they need to orbit the sun, and they need to not have ‘cleared the neighbourhood’ of objects around them.

Pluto was demoted from ‘planet’ to ‘dwarf planet’ in 2006, after scientists argued it had not completely rid the space around it of objects.

After hundreds of years more than 12 billion kilometres away from the sun, RR245 is on a highly elliptical 700-year orbit that is expected to come as close as five billion kilometres to the sun in 2096 before heading out twice as far as Neptune.

OSSOS was originally tasked with mapping the orbital structure of the outer solar system in an effort to decipher its history so the survey was not designed to efficiently detect dwarf planets.

But University of British Columbia’s Professor Brett Gladman said they were “delighted to have found one on such an interesting orbit”.

RR245 will be renamed after the dwarf planet’s orbit has been observed for several years and its trajectory is more clearly defined.

The OSSOS team can submit their preferred name for RR245 to the International Astronomical Union for consideration.