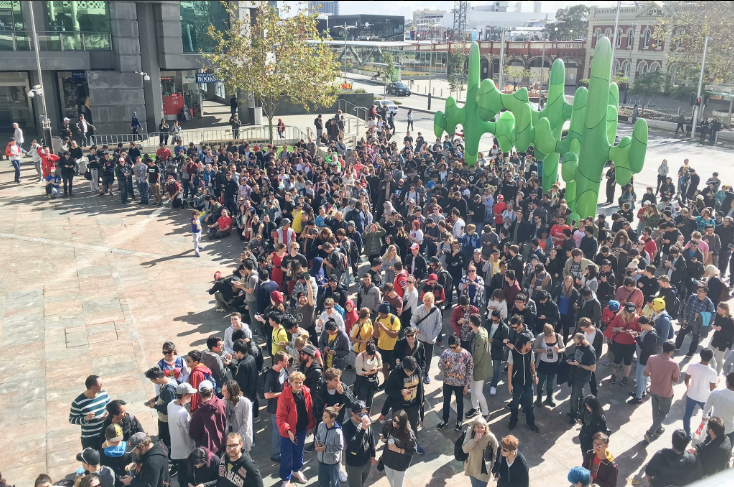 The popularity of smartphone game Pokemon Go is prompting safety concerns, with police forced to close city streets and issue warnings to ensure the wellbeing of thousands of “Pokemon trainers”.

Released on Wednesday in Australia, Pokemon Go – based on the popular Nintendo Game Boy game from the nineties and noughties – has caused havoc on city streets, as players walk around trying to catch Pokemon.

Pokemon Go players use their phones to follow the game’s real world map. This means players were at risk of walking through and across streets while looking at their devices instead of potential risks.

• What to expect from the new Xbox, Playstation
• Stop digital detoxing
• Big step for iPhone texting

Sydney, Melbourne and Perth all hosted massive Pokemon Go gatherings over the weekend, with roads closed in Perth so masses of players could participate safely.

“We’ve issued a warning about playing Pokemon Go on roadways,” a New South Wales police spokesperson told The New Daily. “We may have to issue more warnings for future events too.”

The NSW police spokesperson confirmed officers had been in contact with the Pokemon Go gathering organiser in Sydney, to ensure the thousands of participants played the game safely.

Darwin police posted to Facebook urging players not to enter police stations to catch the creatures. Police in Brisbane issued a series of safety tips for trainers.

A police sergeant in Melbourne told Fairfax Media his officers were “anxious” about the numbers of Pokemon Go players carelessly crossing city streets.

What is Pokemon Go?

Pokemon Go is the augmented reality version of the wildly successful Pokemon game once available on Nintendo’s Game Boy. Both games are based on the Japanese cartoon Pokemon.

The aim of Pokemon Go is essentially to travel the world (literally), catch as many Pokemon as you can and win as many battles as you can.

Pokemon are small animal-like creatures with the ability to be caught and trained by “trainers”.

Pokemon Go players are the trainers.

Using the GPS inbuilt in a smartphone, trainers search the world for wild Pokemon to catch.

You can literally walk to the end of your street, or into the city, or wherever Google Maps take you, and see a Pokemon appear on your screen and then catch it.

Once the Pokemon is caught – using a ‘Pokeball’ – trainers meet rival trainers and pit their Pokemon against each other in battles.

Pokemon trainers also need to accumulate objects, like Pokeballs and healing potions, for their Pokemon.

To do this, Pokemon Go places virtual objects at landmarks around city and suburban streets.

In the Melbourne CBD these ranged from art installations, to heritage buildings and churches.

When players arrive at these points they can pick up their items. To battle and train Pokemon in fighting, players must walk to “Gyms”.

For more, see this guide to Pokemon Go, entitled ‘How To Destroy Your Summer’

The popular game that is shutting down CBD streets