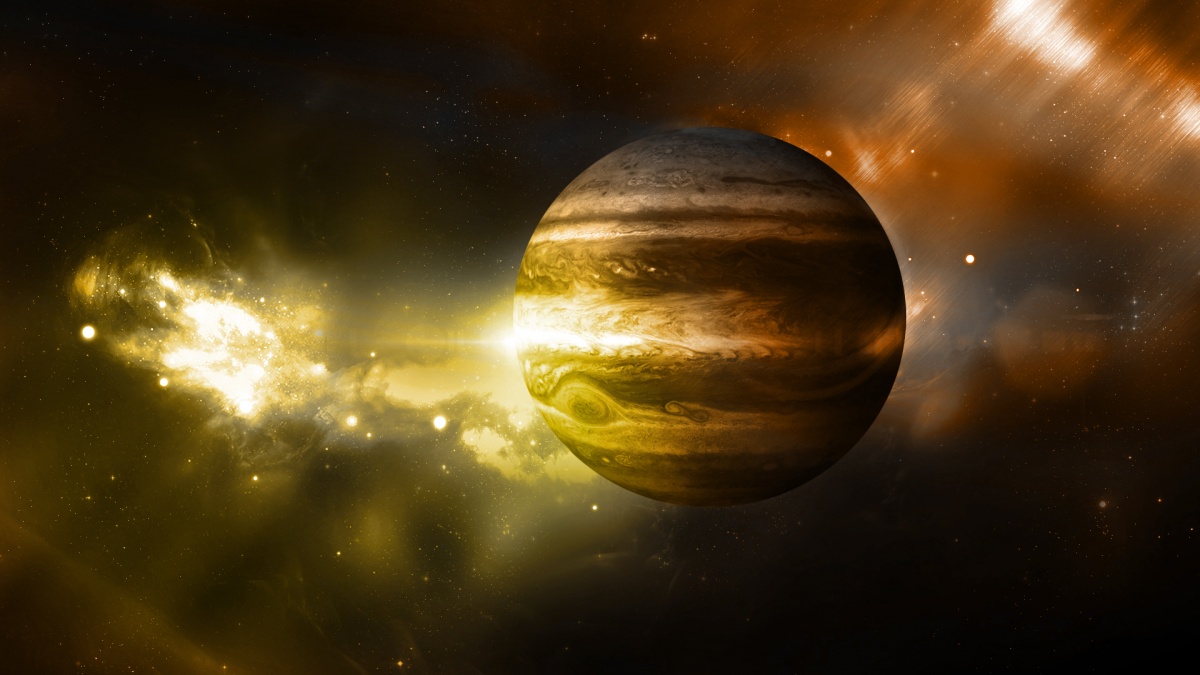 The planet is four times the size of Jupiter, pictured. Photo: NASA

Right now a spacecraft the size of a tennis court is hurtling towards Jupiter at a speed of 30 km per second. Over the next four days it will more than double in speed as it feels the planet’s huge gravitational pull, before slamming into reverse and going into orbit.

The craft, called Juno, will tear through the metal-frying radiation belt that surrounds the gas giant in a punishing close encounter that will be repeated dozens of times in the next 18 months. Its unusual, lopsided orbit will allow Juno to analyse every inch of the planet below.

Why is NASA going to all this trouble? Well, Jupiter is a very special ball of gas.

• Turkey’s year of terror and bloodshed
• Tony Windsor triggers fury with a cup of tea
• ‘Drunkorexia’: the new trend to be drunk and thin

It’s not only the oldest planet, it’s bigger than all the other planets and bits of dross in our solar system put together.

Jupiter’s enormous mass — 300 times that of Earth — gives it such strong gravity it has kept hold of all the material it ever contained, making it effectively a time capsule of our early solar system.

And being made mostly of hydrogen and helium, it’s got more in common with the Sun than it does other planets, minus the star’s nuclear inferno.

Understanding what makes Jupiter tick will help us better understand how our solar system — and others — evolved. And that’s the overriding goal of the Juno mission.

But Jupiter isn’t an easy planet to study. Cloaked in lethal clouds that hide its interior, and surrounded by the most dangerous radiation belt in the solar system, getting Juno in the right place at the right times to dissect Jupiter’s innards — without having its electronics fried — is a massively complex feat.

What we know about Jupiter

Telescopes from Galileo’s day to Hubble have given us a good picture of the stormy belts of cloud at Jupiter’s surface. And glimpses from the odd passing spacecraft have added detail.

We know the outer clouds are ammonia and hydrogen sulphide, and that the Great Red Spot is a storm more than twice the diameter of Earth that’s been raging for hundreds of years. And we know Jupiter’s extraordinary magnetic field is almost 20,000 times more powerful than that of Earth. The field traps charged particles — electrons and ions — which generate the fierce radiation belt around Jupiter, and give rise to the enormous auroras at its poles.

What we don’t know — and Juno should reveal — is what the picture is like beneath the planet’s outer clouds. Knowing Jupiter’s inner composition will rule out some theories of planetary and solar evolution for good, bringing us closer to understanding how solar and planetary systems form.

Directly measuring the inner planet is well beyond anything even Jules Verne could have imagined. The closest we’ve come is a probe that was dropped into the Jovian atmosphere as part of the Galileo mission in 1996. It transmitted its findings — the chemistry and weather of the upper 150km — for almost an hour before being vaporised.

Unlike that probe, Juno is not on a suicide mission. Instead of entering the atmosphere, it will fall past the face of the planet a total of 37 times, getting as close as 4,700km. Those falls are timed to expose Juno to every skerrick of Jupiter. As well as taking stunning images with the mother of all high-res digital cameras — JunoCam — Juno’s instruments will collect data that builds a picture of Jupiter’s heart by measuring its gravitational and magnetic fields, and the composition of the upper 500km or so of the planet’s atmosphere.

This will help clarify our understanding of the causes and effects of planetary magnetic fields and auroras.

The questions Juno was sent to answer:

What’s the weather like below those stormy belts of cloud? And how much water is there?

By analysing microwaves, Juno will measure the chemical composition and layers of movement down to 550km below the cloud tops — including the amount of water in Jupiter’s atmosphere. This is the key to working out which theory of Jupiter’s formation is right. The inner planet produces microwave radiation, and mapping different frequencies of microwaves paints a picture of its layered structure. These microwave signals are blocked by Jupiter’s radiation belts, so Juno’s trips inside the belts will reveal this otherwise-invisible signature of the interior.

Is there a solid core at the heart of Jupiter?

If Jupiter has a solid core it will have a slightly different gravitational field, and that field will have a tiny but measurable effect on Juno’s orbit. Any variations in the orbit will be detected by a Doppler shift in a radio signal constantly sent to Juno and relayed back to earth. This data will build a picture of the churning within the planet, and whether or not it has a solid core. This will also help determine which theory of planetary evolution is right for Jupiter: did gas from the messy cloud of the early solar system simply collapse and clump together, or was it gathered by a big, rocky core?

How is Jupiter’s magnetic field generated?

Juno carries a magnetometer that will create an incredibly detailed 3D map of Jupiter’s magnetic field, and look for small, long-term variations in the field. Together these will help determine the location and action of the planet’s dynamo — whatever swirling, charged material inside the planet generates its magnetic field.

Are auroras on Jupiter the same as those on Earth?

Spectacular auroras can stretch for tens of thousands of kilometres around the poles of Jupiter, creating the greatest light show in the solar system. Sensors will identify the electrons and types of positive ions that produce the coloured auroras as they spiral along magnetic field lines at the poles. Ultraviolet imaging of the auroras from above the poles will help clarify the picture.