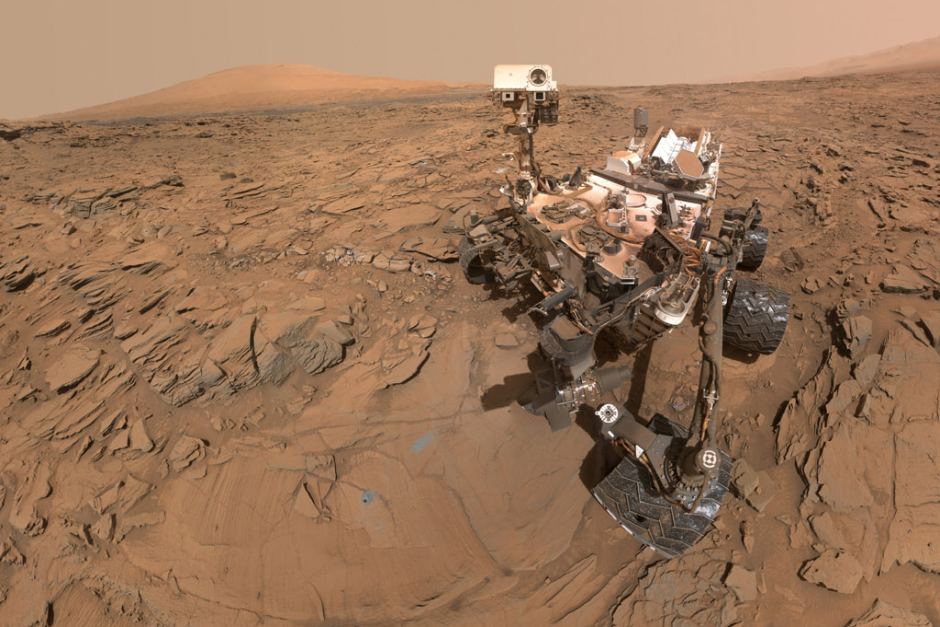 NASA’s Curiosity Rover has beamed back “selfies” from Mars, showing off the latest state of the red planet.

According to experts from NASA’s Jet Propulsion Laboratory in California, the rover covered sand dunes and then crossed a remnant plateau of fractured sandstone.

In a photo taken last month, but released this week, the rover stopped along its route to beam a “selfie” back to Earth.

The Curiosity Rover is shown “posing” at Mars’ Naukluft Plateau, with Mount Sharp in the background after it completed its 12th sample drill.

The rover had spent six months exploring the Murray formation layer at the bottom of Mount Sharp along the Naukluft Plateau.

The new photos show the drill holes the Curiosity created to collect a sample of rock powder from mudstone bedrock at the sample site dubbed Okoruso.

The MAHLI camera mounted at the end of the rover’s robotic arm was used to take the self-portraits, which were captured by stitching together multiple images, ensuring the arm was cut out of frame.

The Curiosity Rover’s core mission has been to investigate whether Mars could support small life forms called microbes and to find out if there were signs of possible past life.

The Mars Science Laboratory rover was launched in November 2011 and landed successfully on Mars in August 2012.

NASA’s next step will be sending the Curiosity Rover up Mount Sharp.

“Now that we’ve skirted our way around the dunes and crossed the plateau, we’ve turned south to climb the mountain head-on,” Curiosity Project scientist Ashwin Vasavada said in a NASA statement.

“Since landing, we’ve been aiming for this gap in the terrain and this left turn. It’s a great moment for the mission.”

Curiosity Rover reached the base of the mountain in 2014 after successfully finding evidence on the surrounding plains that ancient Martian lakes offered conditions that would have been favourable for microbes if Mars had ever hosted life.

Rock layers forming the base of Mount Sharp accumulated as sediment within ancient lakes billions of years ago.

The Murray formation is about 200 meters thick and so far Curiosity Rover has examined about one-fifth of its vertical extent.

“The story that the Murray formation is revealing about the habitability of ancient Mars is one of the mission’s surprises,” Mr Vasavada said.

“It wasn’t obvious from pre-mission data that it formed in long-lived lakes and that its diverse composition would tell us about the chemistry of those lakes and later groundwater.”