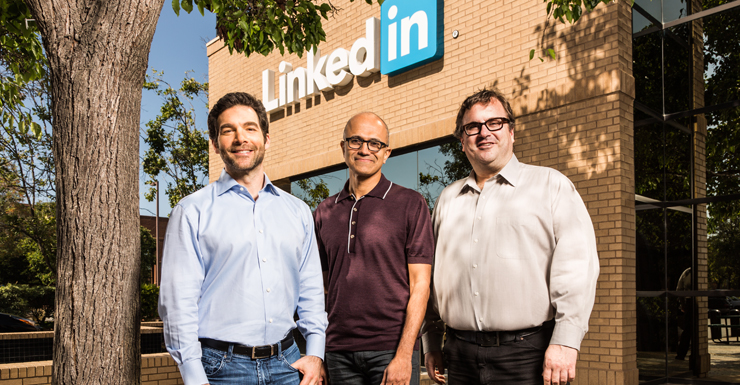 Microsoft has shocked the tech world by announcing its biggest ever deal: the purchase of social media site LinkedIn.

Microsoft will pay $US26.2 billion ($35.19 billion) to combine the software giant’s fast-growing cloud services business with the world’s largest online network for professionals.

Microsoft said it would pay $US196 per share, a 50 per cent premium on the stock’s closing price of $US131.08 on Friday. The deal has been agreed to by both company boards.

“I have always had a great admiration for LinkedIn,” Microsoft CEO Satya Nadella said in a video.

“I have been thinking about this for a long time.”

LinkedIn is the social media network of choice for business professionals and recruiters. It offers a news feed and messaging service like Facebook, but its main point of difference is that user profiles are structured like resumes. Companies frequently advertise vacancies on the network.

The takeover is subject to the approval of LinkedIn shareholders.

The two companies hope to close the deal this year, according to their joint statement.

Jeff Weiner will remain CEO of LinkedIn and will report to Mr Nadella.

For Microsoft, the deal will help it try to keep services like Outlook email relevant, so customers will not want to leave it for competitors such as Google’s Gmail.

For LinkedIn, the opportunity to tap Microsoft’s customers, including the 1.2 billion users of its Office suite of business software, could help it jumpstart growth, which has slowed in recent quarters.

“The professionals of the world can benefit in terms of getting their work done,” said Microsoft chief executive Satya Nadella, who has been trying to reinvigorate the once-lumbering company since taking over in February 2014.

“The Venn diagram is pretty big,” he said, meaning the overlap of customers of both companies, although he did not give a precise number.

He gave an example of a customer walking into a meeting scheduled on a Microsoft Outlook calendar integrated with LinkedIn, receiving notification that one of the people in the meeting went to college with a colleague.

“The future of productivity is around people, identity and data and the relationships between the them,” said Matt McIllwain, a portfolio manager at Madrona Ventures.

“Microsoft is buying LinkedIn for the opportunity to leverage these capabilities and combine them with Microsoft’s strong but complimentary assets in those three areas.”

LinkedIn’s online ad revenue growth slowed to 20 per cent in the fourth quarter of 2016, Reuters reported in February. This is an industry-wide trend, as Facebook and Google intensify competition for ad space.

ut it also derives revenue from paid subscriptions to its premium services, and by selling information about its users.

The software company has not always excelled at mergers, acquisitions and partnerships.

It spent US$1.2 billion on Yammer, an internal messaging network for businesses, nearly four years ago. That company is facing fierce competition from Slack and other workplace messengers.

Arguably Microsoft’s biggest failure was its attempt to create Nokia phones. The intention was to rival the Apple iPhone and Google Android empire.

To this end, Microsoft paid Nokia US$7.2 billion for its phone business in 2013. The Finnish business was the clear winner from that deal. After a string of failures, Microsoft offloaded the business to HMD Global and FIH Mobile for US$350 million earlier this year.