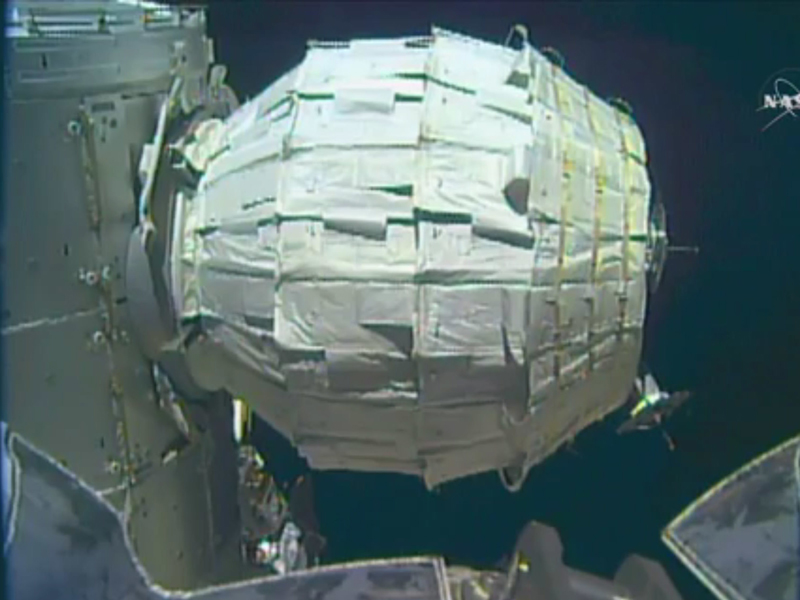 The operation took much longer than expected, stretching over three days in all.

Enough air finally seeped inside so that the puffy white pod could stretch to its full four metres in length and three metres in diameter – the volume equivalent to a small bedroom.

Williams and his five crewmates will have to wait a week before venturing inside. NASA wants to make certain the chamber is airtight before opening the door.

It was NASA’s second shot at inflating the Bigelow Expandable Activity Module, or BEAM, named for the aerospace company that created it as a precursor to moon and Mars habitats, and orbiting tourist hotels.

Experts believe the soft-sided compartment was packed up tight for so long before last month’s launch that the fabric layers had trouble unfolding.

Pressure inside the chamber was relieved on Friday to ease the friction among the multiple layers. That apparently did the trick.

NASA insisted on taking it slow to avoid a sudden pressurisation of BEAM that could stress the connecting parts of the space station.

NASA paid $US17.8 million (SA24.7 million) for the technology demo, which could lead to an even bigger inflatable room at the space station.

Founder Robert Bigelow, a longtime hotel entrepreneur, already is working on a pair of private inflatable space stations that could fly in a few years. He sees inflatables as the spaceflight’s future.

Because expandable spacecraft can be compressed for launch, the rockets can carry more cargo, yet space travellers can still enjoy lots of room.

The standard aluminium rooms that make up the space station – essentially fancy cans – can never be larger than what fits into a rocket.

BEAM – empty except for sensors – will remain attached to the orbiting lab for two years as engineers measure temperature, radiation levels and resistance to space debris impacts.

It will be off limits most of the time to astronauts, given its experimental status.