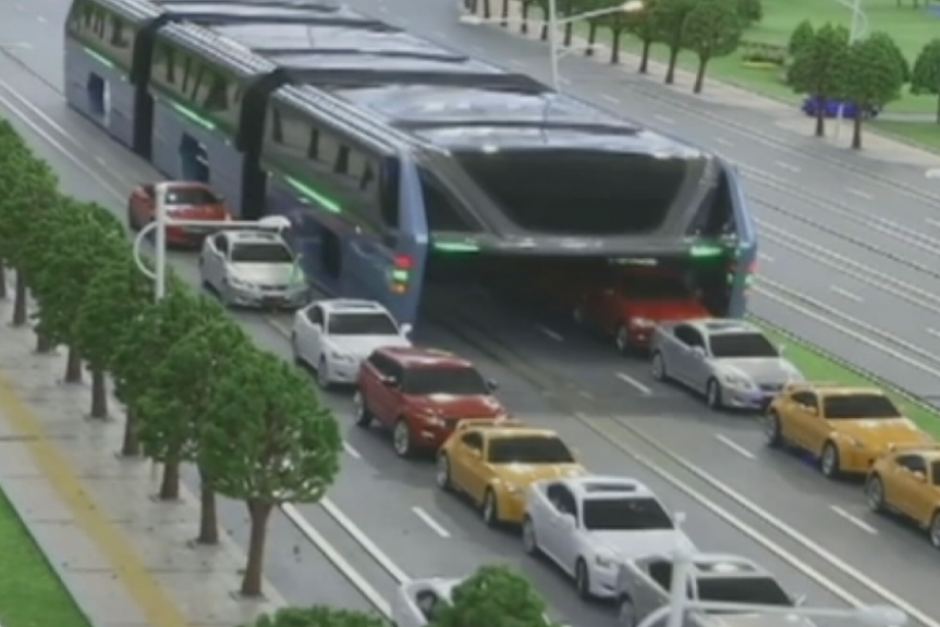 A Chinese proposal for a future bus will drive over multiple lanes of traffic, making it unaffected by traffic jams and freeing space on the road.

A functioning model of the Transit Elevated Bus (TEB) was unveiled at the 19th China Beijing International High-Tech Expo, where it quickly became popular.

The proposed bus would span two traffic lanes and carry up to 1,400 passengers in articulated segments, at speeds up to 60 kilometres per hour.

It would run on special tracks built on either side of the lanes, with 2.1 metres of clearance underneath.

Animations of the bus show the underside simulating the sky, to make it look less like a tunnel, while windows in the sides let drivers see out.

Passengers would board and disembark via ramps that unfold and extend from the sides, and it would have boom gates to stop traffic if necessary.

The Beijing-based company Transit Explore Bus is currently building a life-size model in Changzhou and they plan to test it in July or August, according to the Xinhua news agency.

Chief engineer Song Youzhou told Xinhua that each elevated bus would take the place of 40 conventional buses and, because it is designed to run on electricity, could cut annual fuel consumption by 800 tons and carbon emissions by almost 2,500 tons.

Elevated bus could glide over traffic jams, free up space