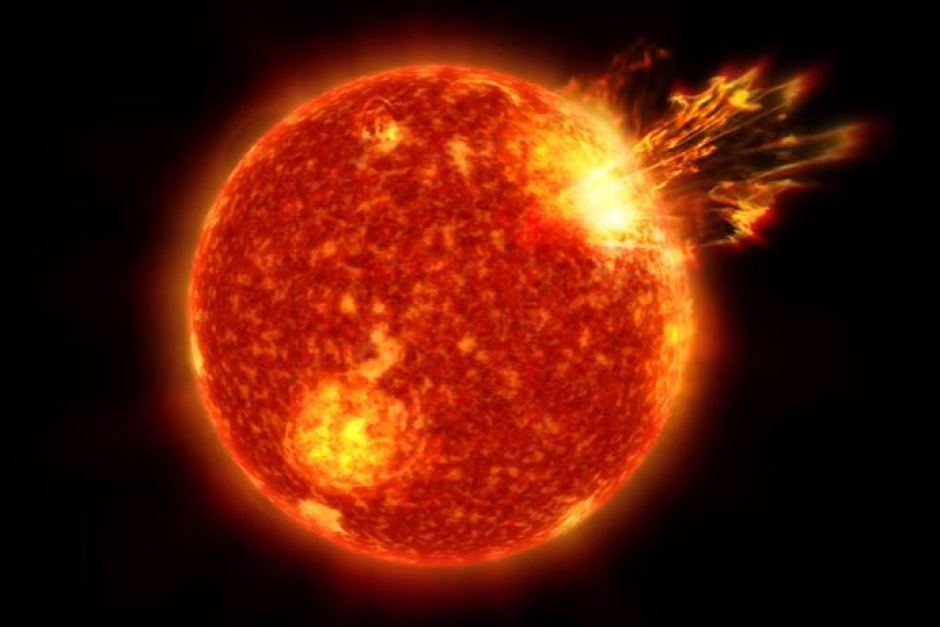 Evidence of violent solar storms from the sun plummeting towards Earth four billion years ago have shed new light on the origins of life, researchers from NASA say.

A study of a stormy adolescent sun has provided insight into the combination of factors which helped create the right conditions for life to develop on Earth.

The sun’s surface was unpredictable and giant eruptions called “superflares” were a daily occurrence, spewing solar materials and radiation into space.

NASA’s paper explored why the Earth’s climate was warm enough for liquid water to be present to encourage simple molecules and allow the planet to brew and incubate life.

The research, published in Nature Geoscience by a team of scientists from NASA said some four billion years ago the sun shone with only about three-quarters of the brightness of today and was not powerful enough to warm the Earth.

“Back then, Earth received only about 70 per cent of the energy from the sun than it does today,” lead author Vladimir Airapetian from NASA’s Goddard Space Flight Centre said.

“That means Earth should have been an icy ball. Instead, geological evidence says it was a warm globe with liquid water. We call this the Faint Young Sun Paradox.

“Our new research shows that solar storms could have been central to warming Earth.”

Using data from the exoplanet-hunting mission Kepler, which has also been recording the activity of different types of stars, NASA created a timeline of how the sun evolved and how it could affect a young Earth.

While solar storms were not a new concept, the new NASA research showed how the powerful solar explosions may have provided the crucial energy needed to warm Earth, despite the sun’s faintness.

“This newly discovered constant influx of solar particles to early Earth may have done more than just warm the atmosphere, it may also have provided the energy needed to make complex chemicals,” NASA’s Kepler mission said in a statement.

“In a planet scattered evenly with simple molecules, it takes a huge amount of incoming energy to create the complex molecules … that eventually seeded life.”

Discovery could lead way for ‘new life’ on other planets

Astronomer Alan Duffy from Swinburne University in Melbourne said the discovery was a game-changer and an opportunity to explore the possibility of life on other planets.

“What this research means is we can now be really specific about looking for other habitable worlds,” he told the ABC.

“We can search for the presence of younger stars that might be producing more violent storms which means we can begin to narrow down and find earth-like worlds — Earth 2.0 if you like — where the conditions appear exactly like those that made life possible on Earth.”

But Mr Duffy ruled out Mars as a candidate.

“Mars has suffered a lot of damage from the sun.”

He also said the research showed the very first steps in the chain towards building life on Earth.

“While the sun was ‘throwing a tantrum’, paradoxically this was a good thing for life on Earth,” Mr Duffy said.

“Not only did this make the planet able to house life, but it also gave the right ingredients to house life.”

Those could go on to react with any molecule in the early atmosphere, producing hydrogen cyanide and nitrous oxide.

“The latter, also known as laughing gas, is a powerful greenhouse gas — important for allowing liquid water to exist,” the NASA team said in a statement

Mr Duffy said the solar storms were now a rare occurrence — once a century at the very least.

“When the magnetic field is overwhelmed it can overload the electricity grid and cause mass blackouts and destroy our satellites.”

He said a large solar storm could send the Earth “back to the Stone Age”.