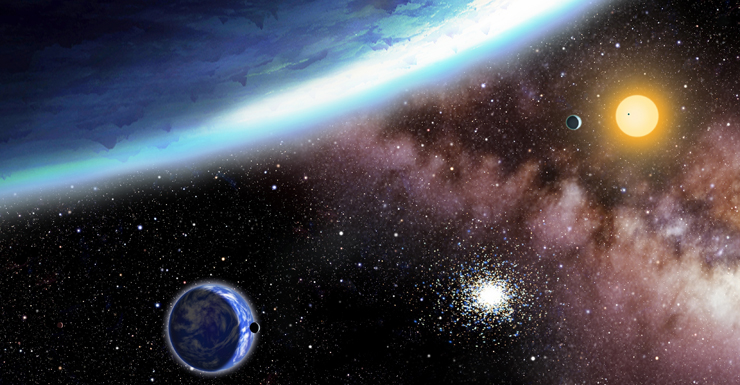 NASA’s Kepler telescope has found 1284 new planets in our galaxy, nine of which are potentially habitable, thereby increasing the likelihood of alien life.

Another 1327 unverified but likely candidates were reported by the US space agency early Wednesday morning in an online press conference.

“Before the Kepler space telescope launched, we did not know whether exoplanets [planets outside our solar system] were rare or common in the galaxy.

“Thanks to Kepler and the research community, we now know there could be more planets than stars,” NASA astrophysics division director Dr Paul Hertz said.

“This knowledge informs the future missions that are needed to take us ever-closer to finding out whether we are alone in the universe.”

Based on this discovery, and current research, NASA Kepler mission scientist Dr Natalie Batalha estimated that “tens of billions” of planets orbit in the potentially habitable “Goldilocks Zone” around their stars.

Her “back of the envelope” calculation was based in part on NASA’s new estimate that at least one planet orbits every star in the sky.

“This work will help Kepler reach its full potential by yielding a deeper understanding of the number of stars that harbour potentially habitable, Earth-size planets — a number that’s needed to design future missions to search for habitable environments and living worlds,” Dr Batalha said.

The Kepler space telescope found the planets by examining a patch of space containing approximately 150,000 stars between 2009 and 2013.

It is a spacecraft launched in 2009 that orbits the Earth in order to scan the Milky Way for Earth-like planets that may sustain life. It finds planets by detecting drops in brightness when a planet passes between its star and the telescope.

The 1284 new planets were verified with 99 per cent probability using a statistical analysis method, the findings of which were published in The Astrophysical Journal.