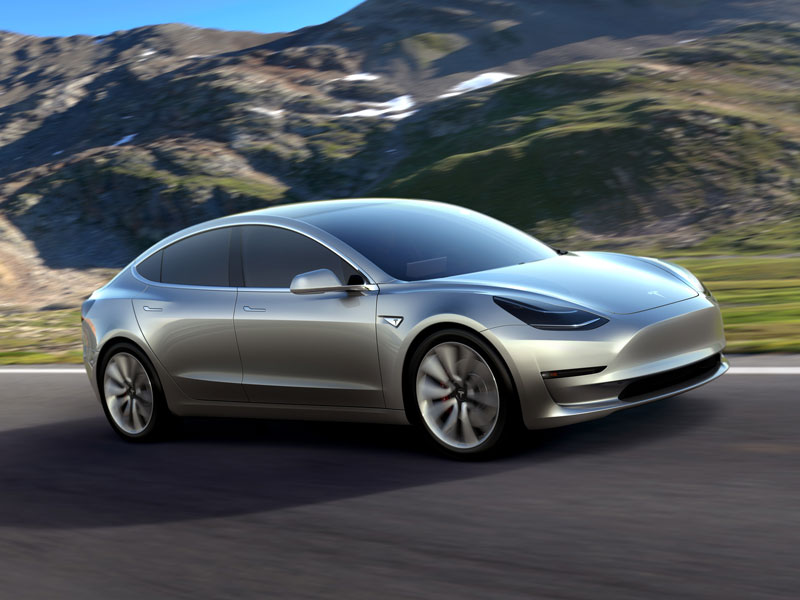 The electric car revolution has had a few false starts over the years, but it might be off and racing for real this time with Tesla CEO Elon Musk last week unveiling his company’s upcoming Model 3 car on stage at Tesla’s Los Angeles design centre.

If Tesla’s Model S series was the first vehicle to show that electric cars could be cool in addition to environmentally-friendly, the Model 3 is promising to throw affordability into the mix with a retail price of just $US35,000 – half the price of its forerunner. Tesla expects to go into production late 2017 in the US.

Australia will be one of the first overseas markets to gain access in 2018, with a converted right-hand drive Model 3 likely to cost somewhere in the vicinity of $A60,000-$A70,000, although some of this cost is in relation to import duties, which are currently under review.

The mass-market price has attracted mass-market demand, with 276,000 pre-orders within 72 hours of going on sale, more than four times the level of industry expectations, promising to put strain on Tesla’s historically small-scale production capability, having sold about 100,000 cars.

The Model 3 itself is sleek and streamlined, with one continuous sheet of glass running from the windscreen to the back of the car and enough space for five people to fit inside.

It also promises to constitute another step towards fully autonomous cars, with a raft of auto-drive features included.

V8 enthusiasts might be the most disappointed by the lack of sound emanating from the completely silent engine, but they’ll be more excited by the actual power of a machine that Mr Musk claims will be capable of accelerating to 100 kmh in less than six seconds.

The Model 3 will feature a battery range of 345km, which is a step up from most current-generation electric cars, but while drivers will be able to charge their cars at home, a widespread rollout of electric charging stations is still required for situations when drivers can’t make it back to the charging dock in their garage.

Dozens of electric charging stations already exist throughout Australia, with industry players expectant that the Model 3 will prove to be the breakthrough that sees such stations become as commonplace as a petrol pump.

Brisbane-based electric charging station developer Tritium is one organisation that expects the vehicle’s arrival to be significant.

“The implication is that it is good, the net outcome from more electric vehicles is a greater need for the infrastructure,” he said.

For all the stylistic improvements and technological bells and whistles, Mr Musk kept the environment front and centre at the launch night, reminding attendees what is at stake.

“It’s really important for the future of the world. We have record high carbon dioxide levels. We recently passed 400 million parts per million of CO2 in the atmosphere,” he said.

A significant take-up of the Model 3, or electric car rivals such as the Nissan Leaf and Mitsubishi MiEV, promises to help Australia reach its emission reduction targets by cutting the number of petrol-guzzling cars on the road.

Light vehicles account for 10 per cent of Australia’s total emissions, according to the Climate Change Authority. The electric car for the masses: Tesla’s Model 3