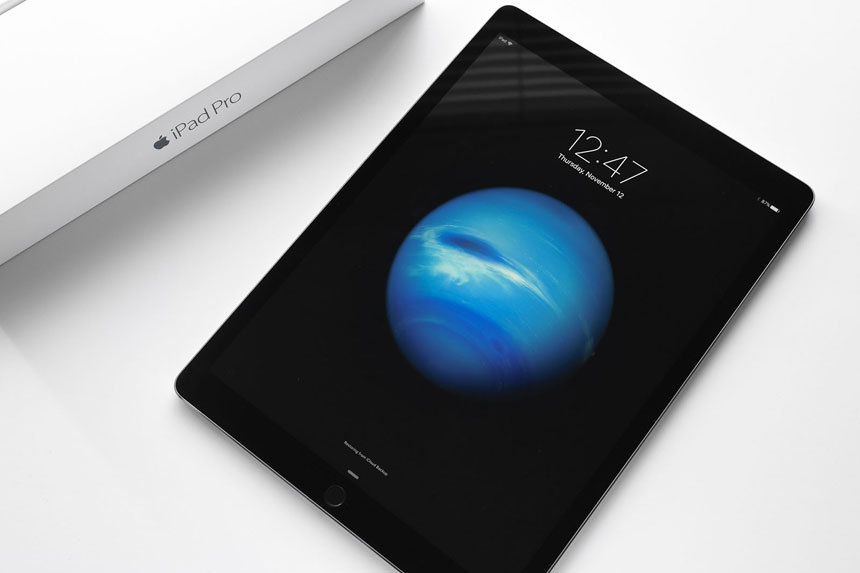 If you’ve been holding out to buy a new iPad, the release of Apple’s new 9.7-inch iPad Pro could be it.

With many of the features of the 12.3-inch iPad Pro, the new version is the same size as the iPad Air 2 and comes in both Wi-Fi and Cellular models, with three internal storage options.

However, unlike the larger iPad Pro, the new device sports Apple’s new True Tone display, which measures the colour temperature of the light around you and adjusts the display to match – contrast changes, whites look different, that kind of thing.

It’s supposed to be a more natural experience for the eye.

You also get a camera upgrade to the same 12-megapixel camera used in iPhone 6s and iPhone SE (the 12.3-inch iPad Pro has an 8-megapixel camera), with a True Tone flash.

But, like any new tablet release – be it from Microsoft, Samsung, Dell, Lenovo et al – the practicality of a device will win out over features most days, which is the case with the 9.7-inch iPad Pro.

Ask anyone who uses a 12.9-inch iPad Pro and they’ll tell you the size is impressive, but isn’t exactly practical.

For the same weight, dimensions and price you could have your pick of a higher-powered device, be it a smaller tablet, a laptop or an ultrabook.

Of course, the point of iPad Pro is to offer a high-powered tablet for professional tasks, like CAD work, animation or video editing. It remains mainly stationary as you work your magic.

The new 9.7-inch iPad Pro is for anyone wanting the power of the larger sibling in a more manageable size; one that can rove easily in your hands or be slipped inside a shoulder bag.

It’s a good solution for highly mobile tablet users, like students, writers of all levels or the daily commuter – the operative word being ‘mobile’.

The new iPad Pro is fast.

After a short amount of time you grow so accustomed to the instant response from apps and features that moving to another device feels like stepping back into the Middle Ages.

This is all thanks to Apple’s latest A9X processor.

How fast is the processor? You won’t find the answer on Apple’s website.

The way they see it, you can’t judge a mobile computing device on hardware alone; not when you design the hardware and tailor the operating system to your specifications, in-house.

If you want a tablet with a faster processor that was built by cherry picking pre-existing components from a factory somewhere in Asia, all for a cheaper price, there are plenty of options out there.

The A9X chip and iOS 9.3 make short work of most complex tasks, such as editing 4K video or multitasking between processor-hungry apps, all while keeping other apps running in the background, such as Mail.

The point of the latest mobile devices is not to bulk up on internal storage, but to live in the cloud instead.

Despite this push to get consumers away from old habits, this device comes with 32GB, 128GB and 256GB storage options.

If you’re toting raw 4K video footage for a feature length film on your Pro, the latter size may do you well.

For everyone else, why pay top dollar for storage when you stream music and video, and store all your personal photos and videos in a cloud service?

While we’re talking storage, file management is still an issue if you like complete control.

Moving to the Apple-verse means you lose finder/window control of files, instead using cloud apps or iCloud for management. It’s not a complete pain for the average consumer, but could be a deal breaker for power users – you decide.

If you’re happy with this compromise, the new iPad Pro will prove a flexible and powerful solution across work, study and lifestyle uses.