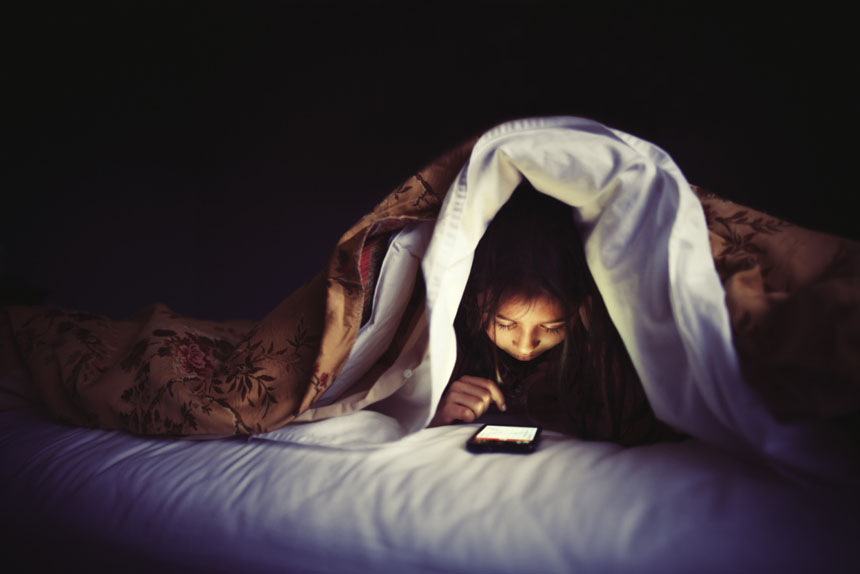 Apple’s new iOS 9.3 has concerned itself with something a little more organic than new emojis: helping iPhone users get a better night’s sleep.

Citing studies which argue the blue light emitted from iPhone screens messes with our natural circadian rhythms, Apple has created ‘Night Shift’ – a setting which gradually removes blue light from our screens as the sun goes down.

“Night Shift uses your iOS device’s clock and geolocation to determine when it’s sunset in your location,” the company posted on its website on Wednesday.

The sleep-saving setting is one of a few changes likely to please iPhone devotees: also included in the iOS 9.3 update is the ability to lock your ‘Notes’ application, personalise your ‘News’ and cruise with convenience with ‘Car Play’.

What is blue light and what does it do?

The term ‘blue light’ doesn’t refer to the colour blue, but the frequency at which a light is vibrating.

Dr Barnes said blue light was perfectly safe to look at throughout the day, but come bedtime we may be doing ourselves a disservice by having a last scroll through Facebook or The New Daily right before we nod off.

Despite agreeing Night Shift is a step in the right direction, Dr Barnes said night owls would be best-off ditching any stimulating material before bed altogether.

“The reason you’re staying awake when you’re on Instagram before bed isn’t just the blue light,” she said, “It’s also the intellectual stimulation.”

Apple isn’t the first to offer anti-blue light software. Company f.lux introduced a similar program for Mac computers in 2009, but requires iPhone and iPad users to jailbreak their devices in order to use it. Perhaps for this reason (or because they were about to introduce some of their own), Apple asked f.lux to cease offering the software on iOS last year.

Lock your Notes from prying eyes

If you’re the kind of person who puts names such as ‘Westpac password’ and ‘Netflix login’ in your iPhone contacts, it’s time to switch to a safer method.

That’s about to become much easier now that the ‘Notes’ application can be locked using a passcode or fingerprint, depending on your preferences.

It’s the first time an individual app will be lockable, meaning the extra security-conscious among us can program separate passwords for their iPhone screen and their notes, or just activate one of the two.

Apple has actually revamped the entire Notes app – with the new option to sort notes by date created, date modified, or alphabetically.

For regular users of the app – one of the simplest in Apple’s suite – this could prove very useful.

Apple’s iOS 9.3 will also have a crack at making some of its newer apps more useful for users.

The Health app, which tracks your fitness, nutrition and sleep data among others, will now be “simpler than ever” to use, according to the company.

One of the reasons the Health app has failed to take off in Australia is the requirement to use third party apps to track the various data.

However, with iOS 9.3, Apple claims these apps will be easier to find, and their data easier to combine.

The News app will be better personalised with a new ‘For You’ section, while Car Play – the app that allows users to access their apps through a car’s touchscreen – claims it will help you find petrol, parking, restaurants and coffee with ease. The next iPhone update could help you sleep better