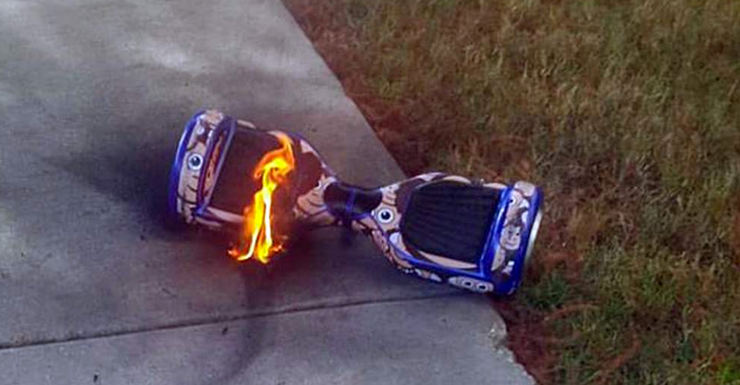 Hugely popular hoverboards, sure to be on many Christmas wish lists, are being “aggressively marketed” to consumers despite the fact they may cause house fires and get users in trouble with the law.

The expensive, two-wheel electric scooters, all the rage in 2015, speed away as users subtly shift their weight forward, and slow down when they lean back.

Some of these lithium battery-powered devices contain inferior technology that can spark fires when plugged into a wall socket to charge, with multiple reports of blazes in England, the US and Hong Kong, according to consumer group CHOICE.

• How to avoid the retail traps at Christmas time
• Apple’s next reported gamble has iPhone users outraged
• Telstra relents, finally has a crazy-good phone plan

CHOICE spokesman Tom Godfrey said the fire risk of some models could be “very severe” because they were not designed to automatically switch off when the battery reaches full charge. Instead, consumers must manually switch off the power or risk overheating the battery to point of combustion.

Mr Godfrey encouraged consumers to buy models that contained overcharging protection – or to closely monitor models that do not contain the safety feature while they charge.

“Really critically, read the instruction manual on these ones because the fires are very severe and very real,” he said.

“If they do overheat, they can catch fire. You do need to monitor it and you do need to unplug it from the wall when it’s finished charging.”

A lithium battery expert told The New Daily that well-designed battery technology should prevent overcharging, and warned consumers to avoid hoverboards that did not contain this technology.

James Cook University engineer Professor Yinghe He said the charging process would normally be regulated by the charger itself. Once the batteries reach a predetermined level of charge (often only 85 per cent), the charger should automatically switch off, he said.

“In theory, if the battery and charger passed the quality control, then overcharge should not happen. It should be cut off automatically when the charge reached the determined level.

“Properly manufactured batteries and chargers should be fine.”

CHOICE’s own online review of one of these models describes it as containing battery technology “not advanced enough to prevent overcharging”.

Riding a hoverboard may be illegal

In addition to being a fire risk, hoverboards could result in a police-issued fine.

Despite being a relatively common sight in many Australian cities, riding the two-wheeled scooters in public is technically illegal in the most populous states, CHOICE claimed.

“It’s also worth noting before rushing to buy one of these futuristic products for Christmas that hoverboards are only allowed on paths or public land in Queensland, the Northern Territory and Tasmania,” Mr Godfrey said. Where did these devices come from?

Hoverboards hit the mainstream when a prototype debuted at an annual consumer electronics show in Las Vegas last year, The Australian reported.

An investigation by tech website Wired traced the scooters, which it described as “a Segway – but with no handlebars”, back to China in 2013.

The piece attributed its popularity, in part, to the long list of celebrities who have promoted them, including Justin Bieber, Chris Brown, Nick Jonas and Kendall Jenner.

“Whatever it is, I love it. And it’s all Justin Bieber’s fault. It looked so fun in his Instagrams,” the author wrote.

“This manufacturing virality, where as soon as something is created it is immediately everywhere, isn’t unique to two-wheeled self-balancing scooters. It’s how Chinese factories make and sell everything from iPhone chargers to televisions to headphones.”