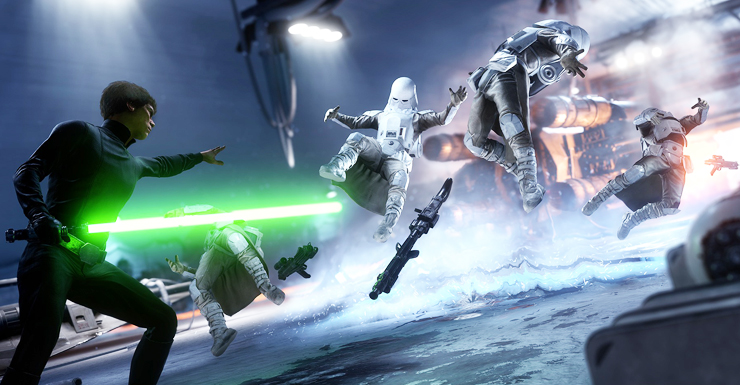 Star Wars Battlefront is a stunning, exciting and authentically executed stroll through the Star Wars universe, replete with heart-pounding lightsaber battles, sprawling wars on the icy planet of Hoth (among others) and dogfights between TIE and X-wing fighters, but one that may have limited appeal outside the movie’s fan base.

Scored by John Williams’ unforgettable soundtrack – go on, start humming the lonely Binary Sunset from A New Hope – and rendered in perfect detail, players take the side of either Rebels or Imperial troops to smash the opposing team in a variety of battles, ranging from eight to 40 players.

• Fallout 4: the trip to the wasteland we’ve been waiting for
• A challenger to Playstation and Xbox has arrived
• Video gaming is ‘definitely a full-time job’

Yes, it’s a joy to pilot a T-47 Airspeeder as you take down an Imperial AT-AT. Yes, you will swell with excitement as you fight as Han Solo, Boba Fett, Princess Leia or any number of other heroes. However, yes, you may also grow weary of the uncomplicated and repetitive gameplay. Comprising single-player, co-op (on and offline) and multiplayer modes, all set across four planets from the Star Wars universe, this game is essentially a series of fire fights, played out on the ground or in the air. It’s kill or be killed, with a minimal amount of tactics or team play required – rinse and repeat. In a word, it’s ‘arcade’ Star Wars, which is not necessarily a bad thing.

By itself, the game’s ground warfare is extremely satisfying; taking place between foot troops, heavy weapon installations and mechanised vehicles, like AT-AT and AT-ST (chicken) walkers and speeder bikes.

The added dimension of air combat is, again, a simplified affair, with battles between TIE fighters, X-wings and other aircraft endlessly raging over your head.

You can even pilot (*gulp*) the Millennium Falcon and Boba Fett’s Slave I. Be still, my beating hyperdrive motivator.

Unlike a number of other online multiplayer battle games where you’re given a choice of player class and perks, Battlefront instead features a simplified, limited card system of special weapons, gadgets or minor perks, each one unlocked at various player levels.

While it undoubtedly simplifies gameplay for those who have never played Battlefield or Call of Duty-style game, it feels limiting and occasionally frustrating. It does level the playing field somewhat, but you definitely feel the difference when facing off with a higher ranked and kitted out player. So why is this the game many people are raving about? Here’s a little context:

A long time ago in a galaxy far, far away … George Lucas created a science-fiction soap opera film that captivated the world, single-handedly spawning one of history’s greatest pop culture mythologies and changing the course of Hollywood cinema forever in the process.

Unless you’ve been living under a rock on Tatooine for nearly 40 years, you’d know that film as Star Wars: Episode IV A New Hope. Its two sequels and three prequels made Lucas an unstoppable force in sci-fi cinema – even the poor reception of the prequels hasn’t dulled enthusiasm for the upcoming Star Wars: Episode VII The Force Awakens.

Giving long-time fans an outlet to indulge their inner Vader in this game is a masterstroke by Disney, who now own the rights to Star Wars. There have been a number of great Star Wars games in the past – such as Knights of the Old Republic – but nothing has come this close to emulating the full experience of battle on a far-off distant planet as Battlefront. The sights, the sounds and the thrills are all set to blockbuster level, and rarely disappoint. For all the authentic thrills it offers, Star Wars Battlefront is little more than a fun arcade game – a Mario Kart 64 for those who grew up loving the films. It’s like chasing your friends around the house as a child, shouting PEW-PEW at each other as you dodge imaginary blaster fire and try to save the princess, usually a bored parent or sibling. This game speaks to the heart, to the child inside.

What it lacks in complexity, it makes up for in vicarious Jedi or Sith fantasies (it’s impossible not to fist pump in delight every time you become Lord Vader or Luke Skywalker and dispense some lightsaber love on the battlefield), as well as AT-ATs and Force Chokes.

To those who walk around the house muttering, ‘I am your father’ to their children or ‘I’d rather kiss a Wookiee’ when sassing an unwelcome advance, Star Wars Battlefront is for you. The Force is weak in Star Wars Battlefront