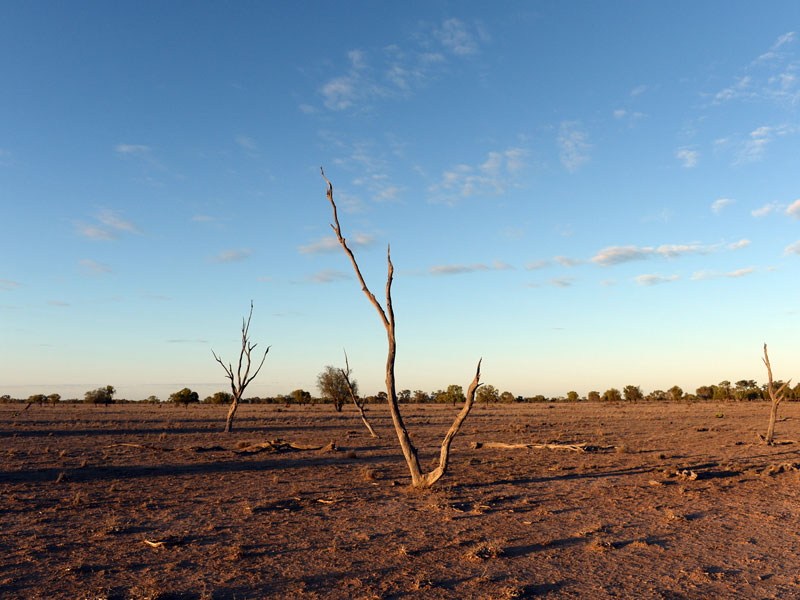 Do not be deceived by wintry storms in Australia’s east. Record heatwaves are brewing off the coast, say weather experts.

Sydney and Melbourne may have been soaked with rain and cold on Wednesday, but the nation’s Agriculture Minister knows we have more to fear from blistering dry than a few fleeting lightning strikes.

Earlier in the week, Barnaby Joyce warned of a “double whammy” threatening to drive away Australia’s cloud cover and unleash the sun’s full wrath.

• ‘Godzilla El Nino’ expected to hit this summer
• Brace yourself Australia, it’s about to get really hot
• Two women in hospital after Sydney lightning attack
• Click here for a national weather forecast

The Minister was referring to a worrying and somewhat rare convergence of events, one in the Pacific Ocean and the other in the Indian Ocean, which could trigger one of the worst dry spells in recent memory.

Earth may suffer its hottest year on record as a result of these events, Bureau of Meteorology (BOM) officials recently told a Senate estimates hearing.

The rain clouds are being sucked away

The primary cause is the resurgence of El Nino (or Christ Child) in the Pacific. This weather phenomenon wreaks havoc on Australia every few years, but there is the possibility that 2015 will rival the worst in recent memory: the droughts of 1997-98 and 1982-83.

Some of earth’s warmest oceanic waters are usually located north-east of Papua New Guinea near the equator. During El Nino, this ‘warm pool’, as scientists call it, shifts east closer to South America.

“It drags the cloud and the rain and everything with it away from Australia,” Dr Watkins said.

What makes these events rare is that El Nino is not acting alone. Another ocean event, the Indian Ocean Dipole, is also wreaking havoc off our coast, forming a “double whammy” that is sucking the rain clouds away.

In the Indian Ocean, surface temperatures are cooling near us while warming near Africa, causing a dipole or clash of opposites.

“Again, you’re getting that warm water moving away from Australia and again effectively taking the rain,” Dr Watkins said.

“It’s good for Africa. It will help with the droughts in Somalia and other places, but not so good for Indonesia, Borneo, Papua New Guinea and Australia.”

Sydney, Melbourne, Canberra, Brisbane and Hobart are likely to suffer, with Adelaide and Perth also potential victims. Darwin may escape its wrath.

November will see the worst of it. Later that month, the Indian Ocean’s influence should die down, according to BOM’s Dr Watkins.

“You would hope it would start to reduce the effects of the Indian Ocean part of the so-called ‘double whammy’,” he said.

“We would hope that the situation will ease a little bit.”

Unfortunately, El Nino is likely to strengthen into December and last into January and February, perhaps without fully hitting us until March, April and May.

“The risk of heat waves will go up.”

‘Everyone will be affected’

This is because many local councils supply water from reservoirs, not groundwater. These supplies are vulnerable to droughts triggered by the ‘double whammy’.

There was no immediate crisis for capital cities, but the BOM has warned that water storages levels would drop over the summer.

Workers employed in water-heavy industries may be impacted as well, an expert on the impact of climate on water resources told The New Daily.

“Any sort of water-sensitive industry or just drinking water supplies can potentially be affected.”

Australians should also brace themselves for a severe bushfire season.

The BOM has warned the outlook for fires over the coming summer “doesn’t look good”, thanks to bone-dry grassland and forests.

Farmers will suffer the most

The Agriculture Minister is most worried about the impact on struggling farmers. The worst hit are in Victoria, South Australia and Queensland.

Even as the Indian and Pacific Oceans return to normal, croppers and graziers will sadly see little respite.

Water resources in the Murray-Darling Basin, where much of Australia’s irrigated farming occurs, are already low.

Storages in northern areas of the basin may be as low as 20 per cent capacity, and the southern areas as low as 45 per cent.

BOM’s senior forecaster had no good news: “The odds of getting recovery rainfall remain fairly low.”