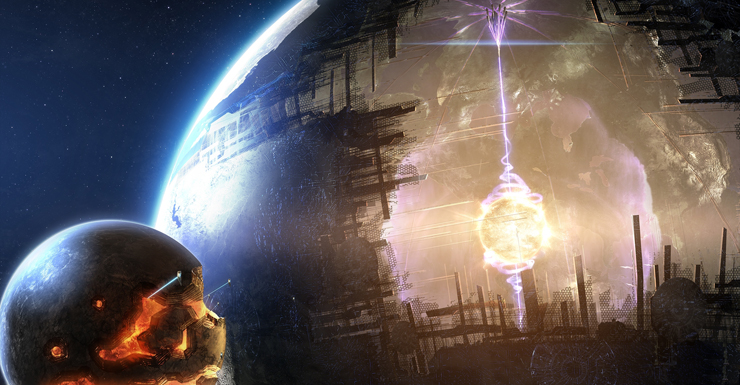 Humanity was laying siege to castles while a super-advanced alien race might have been building one of the largest solar system structures ever detected.

NASA’s planet-detecting satellite Kepler recently glimpsed something weird that happened in space 1400 years ago — a super-massive (and perhaps oddly shaped) thing passing in front of a distant star in a solar system far, far away.

A recent study explained the anomaly as a cluster of comets, failing to even consider extraterrestrials as a possible explanation. But an expert in the search for new planets has looked at the same data and dismissed the comet theory as “contrived”, putting forward a very different, and far more exciting, possibility: an “alien megastructure”.

“Aliens should always be the very last hypothesis you consider, but this looked like something you would expect an alien civilisation to build,” Associate Prof Jason Wright, an astronomer at Penn State, told The Atlantic.

Wright’s opinion is significant because his expertise is identifying distant objects in space. He was also working on a paper for the detection of extrasolar mega structures prior to this discovery.

What the Kepler satellite saw was a very large object or series of objects passing between Earth and a distant star named KIC 8462852, which is some 1,400 light years away and approximately 1.5 times the size of our Sun.

So large was the object that, as it passed in front of the star, it blocked out 22 per cent of the star’s light visible from Earth — making it roughly 22 times bigger than Jupiter, our solar system’s largest planet, according to astronomer Dr Phil Plait.

But Plait is more circumspect, arguing on news website Slate that the alien theory should be treated as a possibility, not a certainty.

What if it is aliens?

If these structures were built by aliens, it would be indicative of a civilisation far more advanced than ours.

One theory is that advanced aliens would construct megastructures, called dyson spheres, that are designed to capture most of a star’s energy on a very large scale.

If these are aliens, it is probably a bit early to put Will Smith in a fighter jet to defend humanity.

This works both ways. If aliens at KIC 8462852 ever looked our way, they would see all the glorious technological advancement human kind boasted in the 7th century, which is to say, very little.

If they were to be looking out for us in much the same way that we are looking out at them, then they wouldn’t see much. Our Earth inhabits a truly unremarkable part of the galaxy, our sun is one among billions of others like it. If they did look, they would not find anything indicative of intelligent life.

Of course the alternate theory could simply be that we don’t fully understand how solar systems form. Therefore, this spate of irregular brightness dips might be a common feature in many solar systems.

The theory put forward by Boyajian and co in the original paper was that these could be clouds of comet material shot across KIC 8462852 after a close encounter with another star.

“The scenario most consistent with the data in hand is the passage of a family of exocomet fragments,” the researchers concluded.

So where to now? Well first KIC 8462852 will be getting a lot more attention from astronomers. Kepler will continue to observe the star and the soon to be launched James Webb telescope will also bring additional focus to the matter.

However, with this type to science needing years, sometimes decades to gather sufficient data it is unlikely we’ll get a confirmation one way or the other for KIC 8462852 for some time.