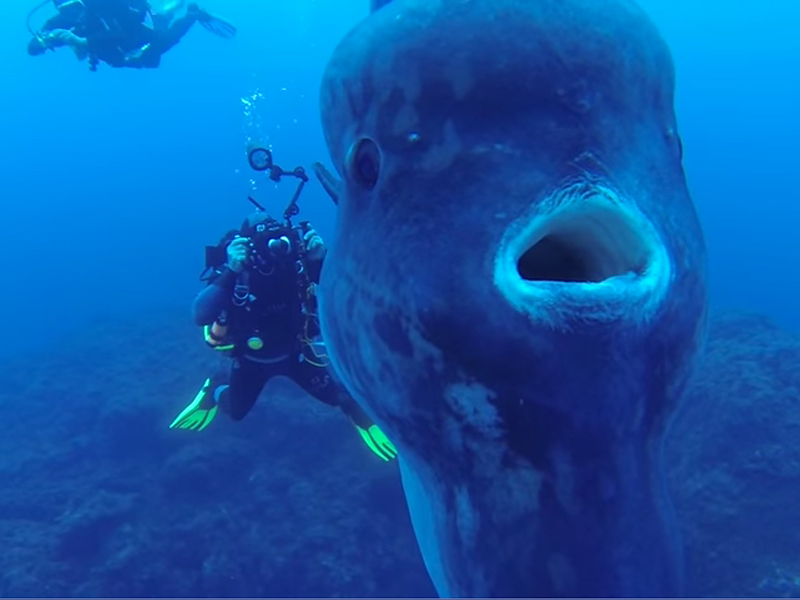 A new video has surfaced this week on YouTube of divers encountering one of the world’s biggest and most bizarre-looking fish, which in German is called ‘The Swimming Head’.

The rare footage, supposedly shot on a GoPro by Miguel Pereira in 2013, shows the divers swimming with the huge Mola mola, or ocean sunfish, reportedly off the Portuguese coast.

“The Sunfish seemed not to be bothered by our presence at all,” Mr Pereira said in a statement accompanying the video.

Despite their docility, these giant creatures are sometimes mistaken for sharks, an expert told The New Daily.

“They get their fins to stick up out of the water, and often we get calls from the public about shark sightings, but it just turns out to be a mola,” Western Australian Museum marine biologist Dr Glenn Moore said. “When you see a fin sticking up out of the water, the first thing you think of is a shark.”

The Mola mola is the heaviest known bony fish in the world. It can weigh up to 2300kg and can grow to over three metres in length.

But their size should not fool us into thinking they’re dangerous, Dr Moore said. The biologist, who has dived with mola in Indonesia, describes them as “very calm” and “incredible animals”. Along with being the ocean’s heaviest fish, the Mola mola is also one of the most fertile, with the females able to produce millions of eggs at a time. A specimen caught near Florida was carrying over 300 million eggs. Professor John Buckeridge, a researcher in deep sea gigantism at RMIT, says the environment is the key factor in allowing a marine species like the mola to grow so large.

“Ultimately, there is no size limit on how large things could be in the ocean,” Professor Buckeridge said.

“Because you have the support of water, animals can grow larger than they would on land, where the problem of restricting your size because of gravity is not a significant factor.”

Mola feast almost entirely on jellyfish, and have been known to accidentally eat and suffocate on plastic bags that resemble their favourite meal.

Thankfully, the enormous sunfish do not have the predatory skills of the great white.

Then check out more GoPro footage from beneath the waves