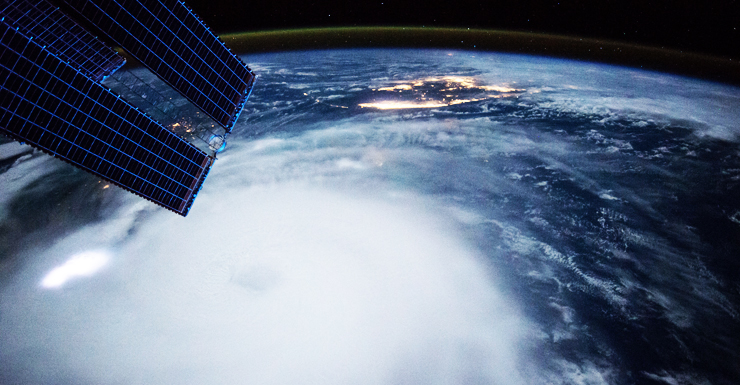 NASA has captured an image of an enormous hurricane as it roared across the Atlantic, but a new study tells us even this won’t teach us to stop living near catastrophes.

Astronaut Scott Kelly uploaded the stunning photo of Hurricane Joaquin this week. While it thankfully subsided with minimal damage, scientists were quick to warn that future events could become more destructive.

• How we survived the ‘end of the world’
• Giant armoured cows and a vanishing act
• Cyborgs, intelligent Americans and a foreign land called Tasmania

Hurricanes form where strong winds sweep over warm equatorial waters which causes water to evaporate into the air where it cools and generate clouds. This process heats the air around the clouds which eventually causes them rise and form large storm cells.

Paradoxically, scientists demonstrated that a natural disaster had the effect of causing more people to move to that particular area.

This is consistent with the idea that disaster would be unlikely to strike in the same place twice.

The joint Australian, UK and Israeli research suggests this effect is due to misleading information presentation where disasters tend to be discussed in terms of their non-occurrence rather than their occurrence.

If humanity is to meets its end in natural disaster however, it will likely be to the delight of the animal kingdom.

A recent survey of the now abandoned Chernobyl has revealed the animal population is thriving in the absence of human interference.

The study used ten years of recorded data in making its assessments and showed animal populations to be in excess of pre-disaster levels for the first time.

While radiation has had a negative impact for animals in the region, removing pressures related to human habitation has resulted in a net growth.

Gains were especially evident for wolf species where current populations levels are seven times larger than in other European reserves.

The US space agency has confirmed that on Saturday, Earth will have a close encounter with asteroid 86666.

The hurtling rocky body could be up to 2km across, which is bad news if it were to impact Earth.

While 86666 is smaller than the asteroid that wiped out the dinosaurs, it would most likely still cause an extinction class event. A part of this is due to the significant velocity of 8666 where current estimates show the asteroid to be moving at roughly 17km per second.

Despite all this doom and gloom, NASA have highlighted that the asteroid will be several million kilometres away from Earth at it’s closest point and is extremely unlikely to cause any disruption. Author Salman Rushdie stabbed in the neck by masked assailant on stage
Melbourne society icon Lillian Frank dead at 92
Foreign Minister Penny Wong vows to keep working to free Aussie journo Cheng Lei from Chinese jail
Cameron Smith and fellow Aussies in the thick of it at PGA’s Memphis tournament
Taiwan thanks US for maintaining regional security in the face of Beijing’s bullying
Ex-Liberal staffer: Survivors weren’t asked about their ordeals in NSW parliament
Facebook gets feelings with six emojis on the way
Today's Stories

The enormous hurricane visible from space