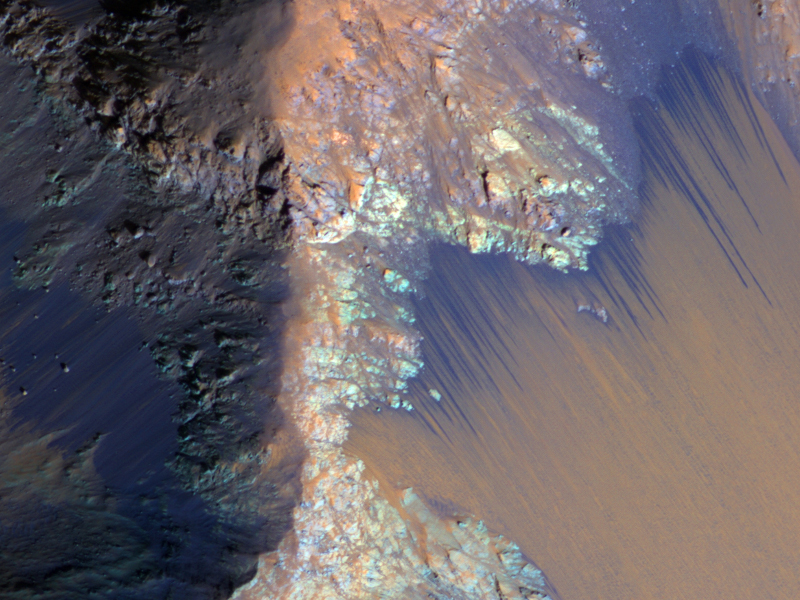 The US space agency has announced it has strong evidence that water flows seasonally on Mars, giving new hope to the search for extraterrestrial life.

In a widely anticipated press conference on Tuesday morning (AEST), NASA reported that a spacecraft orbiting the red planet had detected salty liquid water for the first time.

“The existence of liquid water on Mars — even if it’s super salty briney water — gives the possibility that if there’s life on Mars we have a way to describe how it might survive,” astronaut John Grunsfeld said.

The new evidence was obtained through analysis of dark streaks running down Martian slopes, called ‘recurring slope lineae’, which would form in the planet’s spring, grow by summer and then disappear by autumn.

These streaks have now been identified as hydrated salts — the signature of liquid salty water.

Mars is more than red dust

The presence of water makes it possible for life to exist on the planet, depending on its salt content. It also makes it easier to support human life during NASA’s planned mission to Mars in the 2030s.

“Mars is not the dry, arid planet we thought of in the past,” NASA planetary science director Jim Green told the press conference.

In addition to liquid water detected by an orbiting spacecraft, the Mars rover has also detected more humid air and moister soil than anticipated.

“It took multiple spacecraft over several years to solve this mystery, and now we know there is liquid water on the surface of this cold, desert planet,” NASA’s lead scientist for Mars exploration Michael Meyer said.

“It seems that the more we study Mars, the more we learn how life could be supported and where there are resources to support life in the future.”

A new target in the search for life

An astrobiologist told The New Daily prior to the announcement that confirmation of these “water-eroded gullies” could help the search for alien life.

“We’ve had evidence for several years now that those gullies are still forming because the orbiter has taken very detailed images of the planet on a regular basis and that has shown new gullies appearing,” Professor Malcolm Walter, founding director of the Australian Centre for Astrobiology, said.

“It would be a great target for looking for microbial life on Mars.”

The water was detected close to the billion-dollar robot currently collecting data on the planet.

But the rover cannot test the water directly, both because the mountains where it flows are too steep, and because of the risk of contaminating the water with microbes from Earth.

The NASA announcement came days before the worldwide opening of blockbuster film The Martian, in which Matt Damon fights to survive alone on Mars.

Director Ridley Scott did not seem surprised by the news, saying he knew about it “months ago”.

“When I first talked to NASA, we got into all kinds of stuff,” he told Yahoo Movies after the press conference.

Scott worked closely with the space agency to improve the scientific accuracy of the film.

So, did NASA coincide the announcement with the movie’s release to get maximum publicity?

We’ll send in the rover to find out.