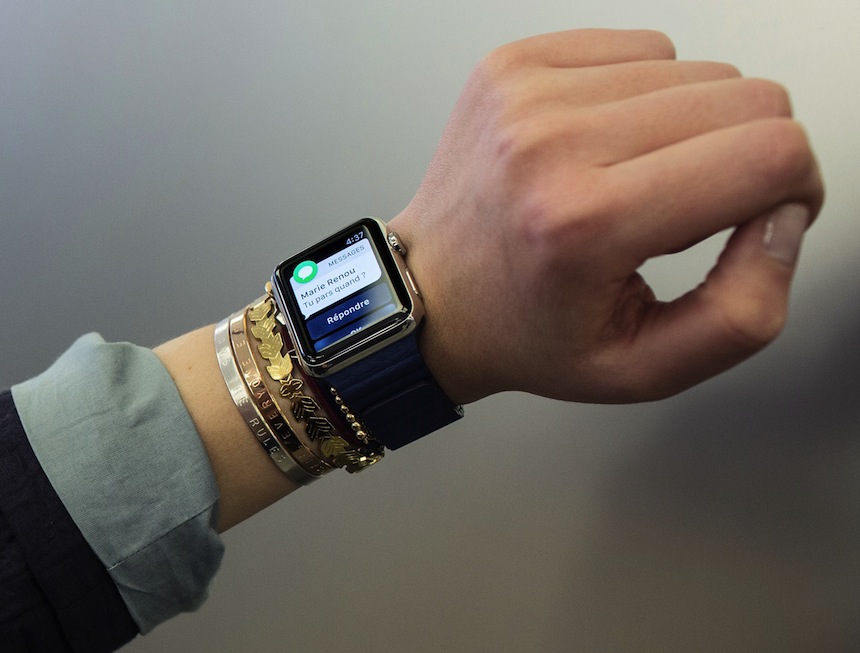 It was love at first sight when I opened the smooth, white case to find a brand new Apple Watch, glinting in the winter sun.

Like all new love interests, the honeymoon period was blissful – a period of two or three days in which this new addition to my life could do no wrong.

After all, it’s hard not to get caught up in the hype. Apple is known for its revolutionary products and slick design and this new kid on the block was no exception.

The company was hit with an onslaught of pre-orders, with only a lucky few receiving theirs on the official release date of April 24.

As one of those lucky few, I felt privileged and a little smug to be the first to spend time with this new tech personality.

It synced up to my iPhone seamlessly and the sleek band (I got the Milanese loop) felt like it was made for me.

It’s been strapped to my wrist ever since, but the relationship has been a rollercoaster ride. While the technology is fairly intuitive for any Apple natives, there have been a few moments of confusion and annoyance.

Since the device is not yet at iPhone status – i.e. you can find it on every man and his dog – there’s a lot of novelty value in wearing one.

People ask to try it on, coo over its changing faces (you can choose from classic options or fun ones like Mickey Mouse or flowers) and ask me how to check my heartbeat.

It’s a pretty stunning piece of tech and you’d want it to be – at $949 it’s around the same price as an entry level watch from an iconic brand like Longines.

…But a bit controlling

About an hour into my first day with the watch, it zaps me.

Although this sounds alarming, the built-in “haptic feedback” function is gentle, if not a little foreign.

My new friend is telling me to “stand up” to fulfil my daily activity goal – it’s like having a mini Michelle Bridges strapped to my arm.

What’s more, all your notifications come through your watch which can be a pretty distracting experience.

Try having an intimate dinner with friends while your wrist vibrates wildly with emails from work.

Worse, messages flash up as a preview on the screen, leaving you with little privacy as you broadcast your best friend’s musings to everyone around you.

Of course, these notifications can be turned off through the Apple Watch app on the iPhone, but it feels stupid to switch off one of the device’s unique features.

My first real “wow” moment comes when I’m driving to a tricky location and the maps app comes through my watch, tapping me when to turn and sending straightforward directions straight to my wrist.

It removes that awkward problem of glancing down at your phone in your lap to double check your location – a nuisance and a safety hazard.

The calendar reminders are also handy – appearing at the bottom of my watch face until I clear them. A friend’s birthday I would have otherwise forgotten greets me every moment I check the time.

…But a little needy

The watch connects to the phone through bluetooth, allowing you to scroll through Instagram or Twitter, check emails and even answer calls and messages on the watch itself.

The downside is that most of these things are unavailable if your phone is out of range – rendering the watch a little, well, normal.

It can still store your calendar, take your heartbeat and track your activity but a lot of the functionality is lost with your iPhone.

It can do some really cool things

If you ever watched Get Smart, the similarities between the new Apple device and Maxwell Smart’s spy watch will not go unnoticed.

It’s pretty awesome answering a phone call on your hand, or summoning Siri and asking her questions at will.

One of the real highlights is the camera function, which acts as a far less dorky selfie stick.

The watch can remotely control your phone’s camera in range, allowing you to set up a photo, frame it and take it without even touching your phone.

Of course, this also opens up a whole world of spying capabilities – and possibly a few privacy problems – but I’ll leave you to imagine those on your own.

Testing #applewatch photo function much to the bemusement of my colleagues @ebonybowden and @JamesFernyhough pic.twitter.com/xYxW3BM2n3

…But it gets tired easily

One feature vastly under appreciated in your classic, run-of-the-mill wristwatch is its battery life.

This becomes evident when you find yourself having to rush home to charge your new smart watch.

The Apple Watch provides up to 18 hours of battery life which is impressive given its many features but annoying when you just want to know the damn time and it’s up and died.

The magnetic charger is pretty nifty but given I also carry a phone and laptop charger, it’s really just another thing in my handbag.

The watch really hits its stride in the domain of dinner party conversations and procrastination.

It’s undeniably fun to play with and each day returns a new surprise feature that’s fun to show off to your friends.

Swapping the faces to match your outfit and knowing it’s possible to sub your old band out for a new one with a swift click are certainly both appealing for any fashionistas out there.

…But, ultimately, it’s not a must-have

In the great history of Apple products, this watch is likely to be replaced in a year or so with a newer, thinner model.

Unlike its predecessors from Rolex or Tag Heuer, the watch loses value the minute it leaves the store and it’s downhill from there.

Let’s all take a moment to reflect on the iPod – an item now confined to the annals of technological history.

Apple essentially cannibalised its own product by adding the music player functionality to its phones, rendering the iPod irrelevant.

Thus, it’s easy to see why I’m wary the watch might not be cool forever. For the next six months, even.

If you’ve got a spare $500 lying around and some time on your hands, there are far worse things you could spend your cash on.

But if, like me, you already own a perfectly good watch and don’t crave the seamless integration of all facets of life, it might be better to buy something a little more, well, timeless.

The Apple Watch retails for $499 and up at Apple.com.

Susannah Guthrie was given a review unit of the Apple Watch courtesy of Apple.

Peter Dutton touted as next Liberal leader as he claimed victory in Dickson
‘The urgency of the situation’: WHO steps in as monkeypox cases erupt around the world
Volodymyr Zelensky: How war will end as Ukraine ‘breaks backbone’ of Russian army
Jim Chalmers decries Coalition waste as Labor hits the hustings amid downpours in Queensland
Anthony Albanese, Scott Morrison cast their votes in Sydney
Australian aces at French Open out to show there’s life after Ash Barty
The internet’s best reactions to ‘how old?’ tool
Today's Stories

Sorry Apple, but your new watch is a waste of time