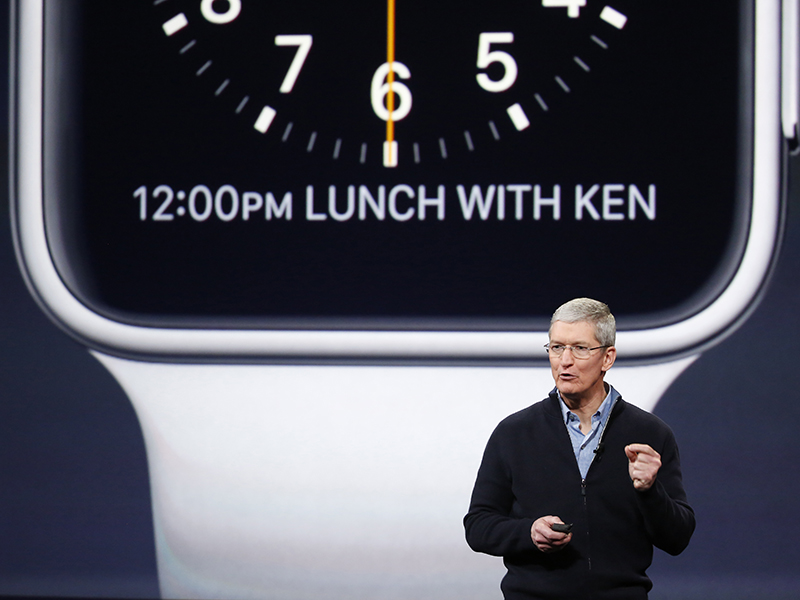 Tech giant Apple has entered the smartwatch market with a high-end device that prioritises health and fitness and allows users to send and receive calls and messages – just like a secret agent.

The Apple Watch was launched at a special event in San Francisco on Monday (Tuesday morning Australian time), where it was confirmed that pre-orders will start April 10 for delivery on April 24.

Those dates apply to nine countries prioritised for the release, including Australia.

There are ten different versions of the device, with prices starting at $499, ranging up to $1629 – unless you want the (literally) gold-plated version, which comes with a hefty price tag of $14,000.

Apple CEO Tim Cook said the keenly anticipated watch was “the most personal device (Apple has) ever created”.

The smartwatch, which can display a variety of faces ranging from a classic watch to an animated Mickey Mouse, connects to the iPhone and contains a variety of health tracking applications, plus calls and messaging capabilities.

“With the built in speaker and microphone you can receive calls on your watch,” Cook said.

“I have been wanting to do this since I was five years old,” he added.

The watch is also integrated with Apple Pay’s mobile wallet, and can be used to view pictures and monitor news, and also connect to social media.

Apple demonstrated the watch’s ability to play music, with lyrics displayed on the watch face. The company also demonstrated a handy app to open a garage door from afar to let in a family member who is locked out.

Apple enters a market that already has a number of players, ranging from South Korean giants Samsung and LG, to Japan’s Sony and startups such as Pebble.

But analysts expect Apple to lift the market by integrating the watch with the iPhone and its software ecosystem, and its range of apps and sensors for health and fitness.

At the event, Apple also unveiled a new Macbook laptop computer than weighs less than a kilogram, and a new initiative to use the iPhone to collect data for medical research.

Apple Watch: price, release date, what it can do