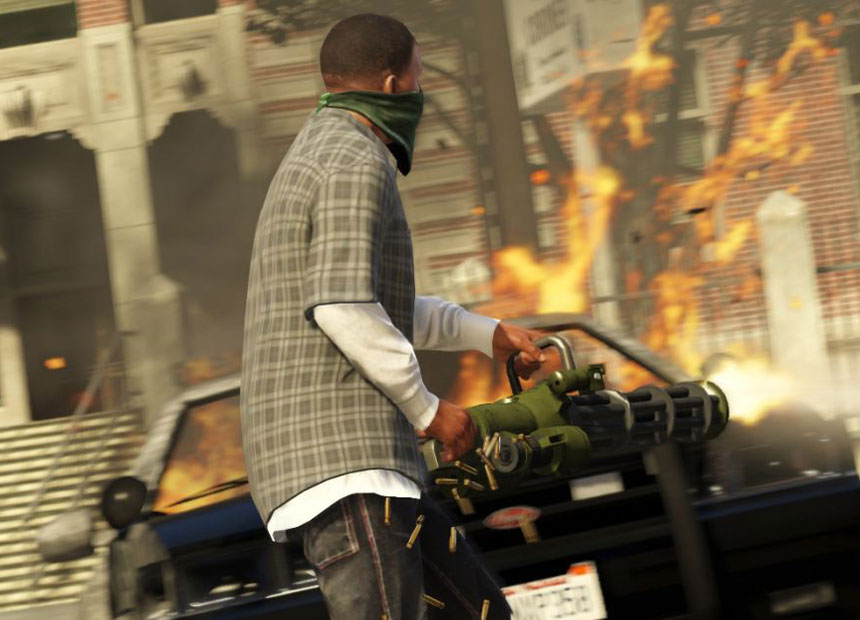 A Change.org petition calling on the retailer to withdraw the game from sale has gained over 38,000 signatures.

The women behind the petition, named on the site as Nicole, Clarie and Kat, said as survivors of sexual violence they felt the game sent a dangerous message.

• Christmas toys 2014: this year’s coolest gift ideas for kids
• How to resurrect your dead smartphone

“It’s a game that encourages players to murder women for entertainment. The incentive is to commit sexual violence against women, then abuse or kill them to proceed or get ‘health’ points – and now Target are stocking it and promoting it for your Xmas stocking,” the petition said.

“This misogynistic GTA V literally makes a game of bashing, killing and horrific violence against women.”

The R-Rated game has been available on Xbox 360 and PlayStation 3 for over a year.

Last month is was re-released on the new consoles, Xbox One and PlayStation 4.

“We’ve been speaking to many customers over recent days about the game, and there is a significant level of concern about the game’s content,” Mr Cooper said in a statement.

“We’ve also had customer feedback in support of us selling the game, and we respect their perspective on the issue.

“However, we feel the decision to stop selling GTA5 is in line with the majority view of our customers.”

Fans of the GTA series have taken to social media expressing their anger at the game being pulled from sale.

Many said the game was being unfairly targeted, and those who opposed violent video games did not have to buy it.

“All of you people saying thanks to Target are ignorant morons. Just because it is possible in the game to inflict violence (towards men and women) this is hardly the objective of the game,” wrote Derek Elphick.

“I’m disappointed that the game has been removed from your stores. It seems like it is an admission of guilt from your behalf when all you were doing is catering to your customers,” wrote Matt Larkin.

“I feel sorry for the people who will now miss out on this product from your store due to the ignorance of people in this country.”

Unbelievable @Targetaus. There is a reason why Australia has an R18+ rating for video games just like #GTAV.

Target Australia’s Facebook post announcing the withdrawal of the game received more than 1800 comments after being posted around 8:30pm Wednesday night.

It is not the first time the series has sparked controversy, drawing criticism worldwide for its depiction of graphic violence, criminal behaviour and sexual violence.

In September 2013 three Adelaide teens were arrested trying to replicate the game in real life when they robbed a service station while drunk.

On its release GTA V set a sales record for entertainment products, passing the $1 billion sales mark after three days.