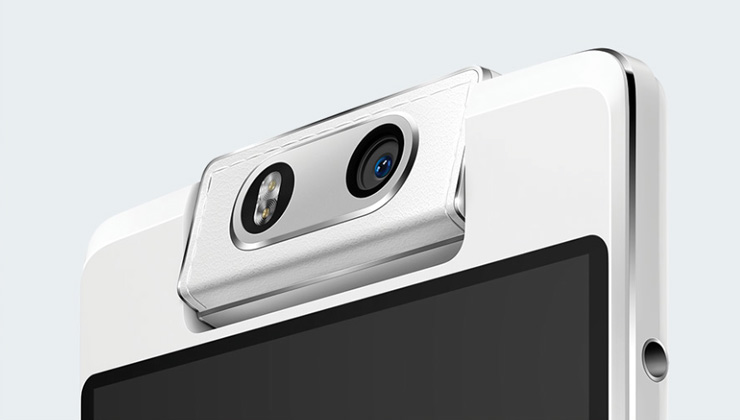 Two new game-changing mobile phones have been unveiled by Chinese electronics company Oppo, with Samsung and Apple being warned by gadget bloggers to watch their backs.

The Oppo R5 and N3 have both been kitted with world-best features, with the N3’s camera the best on a smartphone and the R5 now the world’s thinnest phone.

Prices are expected to be a selling point, with the R5 significantly cheaper than the iPhone 6, priced at $499 in the US compared to $649 for Apple’s offering.

The phones will be released in Australia later in the year but dates are yet to be announced by Oppo.

The New Daily takes a look at the specs of the two phones which are tipped to make waves in the smartphone industry.

The N3 is a large phone, fitted out with the same 5.5-inch display as the iPhone 6 Plus, but that’s where the similarities between the two handsets end.

The N3’s most incredible feature is its 206-degree rotating 16-megapixel camera which allows users to take high-quality images both of themselves and of others.

The camera quality is double the iPhone’s eight-megapixel rear camera.

Like the iPhone 5s and 6, the N3 has fingerprint technology, but is located on the rear of the phone.

Users are also able to scroll through their phone without touching the screen, instead using the rear fingerprint scanner to scroll.

The N3 can be remotely operated with a small keychain-sized remote which controls the camera, changes music and locates your phone by setting off an alarm.

The phone is made with an alloy frame and features up to 128GB of storage.

Verdict Worth a look for its amazing camera

The R5 claims to be the thinnest phone in the world, boasting a thickness of just 4.85mm, almost two millimetres thinner than the 6.9mm iPhone 6.

The phone has slightly less impressive specs than the N3, featuring a 5.2-inch screen, but is still larger than the regular 4.7-inch iPhone 6.

Both the R5 and N3 have rapid charging features, with a 30-minute charge taking a flat battery to 75 per cent.

A five-minute charge is enough for a two-hour phone call, claims Oppo.

The phone is kitted out with a 13-megapixel rear camera and a five-megapixel front camera.

The R5 boasts photo-editing software, allowing users to change the focus of photos after they have already been taken.

The smartphone’s brushed alloy hardware and rounded design are similar to the iPhone, but features heat-absorbing materials which come in handy during periods of heavy usage.

Unfortunately the phone is so thin that it doesn’t have a headphone jack, so those who like to listen to music on their phones should avoid this gadget.

Verdict It’s still a close call with the iPhone 6

Hello Oppo: is this iPhone’s best competition yet?