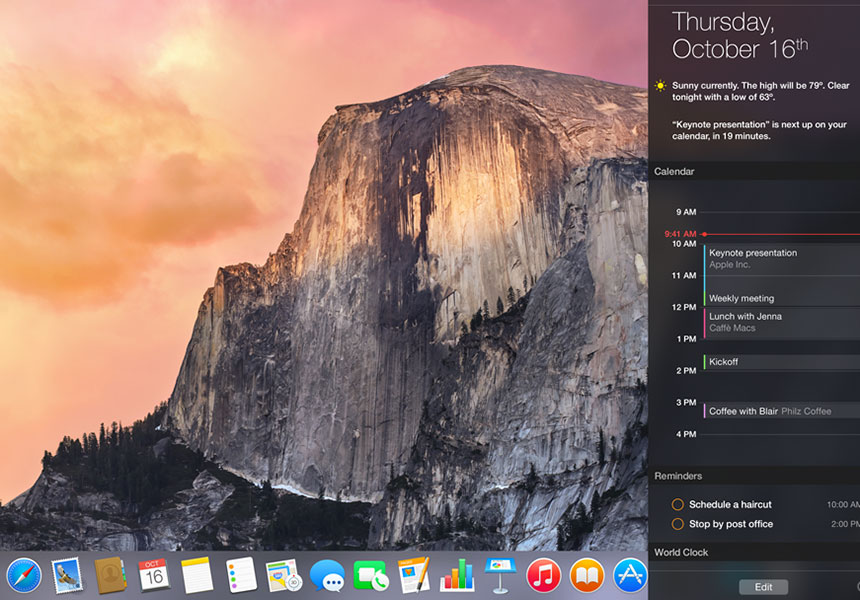 For those firmly ensconced within the cult of Mac, Apple’s latest operating system, OS X 10.10 Yosemite, is the most daring yet.

New features include the ability to perform tasks while moving from one device to another – appropriately called Handoff – a nuclear-powered Spotlight search function, improvements to email functionality, desktop calling and SMS messaging, and Apple’s new and improved iCloud Drive.

Of course, Apple being Apple, to get the full benefit of these new functions, you’ll need to use an iPhone, iPad or both, alongside your PC of choice; either a desktop iMac or a MacBook.

However, by itself, the speed improvements and a number of other standalone functions – like the ability to send large attachments in Mail, called Mail Drop – still make Yosemite a worthwhile upgrade. The first and most obvious change with Yosemite is the visual experience. In line with recently introduced versions of iOS, Apple has opted for a simpler approach that eliminates the embossed feel that has dominated UIs (User Interface) for the past decade.

Yosemite is now streamlined and refined, almost flatter, eliminating the visual ‘clutter’ that crept in with previous versions of OS X after years of updates.

For new users, this will all likely feel fresh and clean. For existing users, it may feel a little jarring to begin with.

System fonts have also been overhauled and, again, take a little getting used to, but augment the crisp finish of app windows, toolbars and icons.

Aesthetics aside, the real test of any operating system lay not in the visual experience, but the performance.

If you’re a MacBook user you should notice an improvement in battery life, provided you use native Mac apps, like Safari, Mail, Pages, iMovie et al. Naturally, these programs are optimised to work with OS X as efficiently as possible.

But if you use Chrome, Outlook, Microsoft Office, or any number of other third-party apps, battery life improvement won’t be as noticeable. Integration is the name of the game with this new OS, with Handoff playing a starring role in Apple’s Continuity family.

This feature allows users to begin a task on one platform and move seamlessly to another. For example, begin typing an email on your Mac, then pick up your iPhone or iPad and pick up where you left off. Likewise with Notes, Safari, Contacts and more.

App Store suggestions, news headlines, iBooks listings, you name it; they all appear when you fire up this hefty search box and start tapping in your query.

It’s now just a matter of time before Spotlight is integrated with Siri, creating a virtual assistant of enviable power. Take that, Microsoft paperclip!

Another addition to continuity; phone calls and text messaging to any phone can now be handled via your Mac. That’s right, you can now message Android, Windows, Blackberry, Firefox and other phone users like you’ve been able to do previously with iPhone users in Messages. No headset is required for calls, as your Mac operates as a speakerphone. When your phone rings, so does your Mac, and you choose where to take the call. It’s that simple.

Along with the ability to send large email attachments (up to 5GB), Mac Mail now includes a number of mark-up features that allow users to edit attachments within the actual email.

Apple’s foray into cloud storage, iCloud Drive is a nice addition, but with entry-level storage of 5GB, you may find it swiftly falls short of your requirements – photos, movies, notes, emails… it all adds up.

But considering native apps like Pages and iPhoto are free across Apple devices, Drive is now a handy way to move and work seamlessly between devices without sacrificing function. This alone is a great start to using the feature.

OS X Yosemite is the most stable and feature-packed Apple operating system released since the launch of the OS X line. There’s no reason not to upgrade.

• Back up, back up, BACK UP your existing hard drive*. Apple’s Time Machine is a good option for this
• Search the Mac App Store for ‘OS X Yosemite’ – it’s a free upgrade for those running OS X 10.6.8 or later
• Click the ‘Download’ button and follow the instructions on screen

Log on here to check if your hardware meets specifications.

* The New Daily accepts no responsibility for loss of data resulting from changes to your system’s software or configuration.

Is Apple’s Yosemite up to scratch? We put it to the test