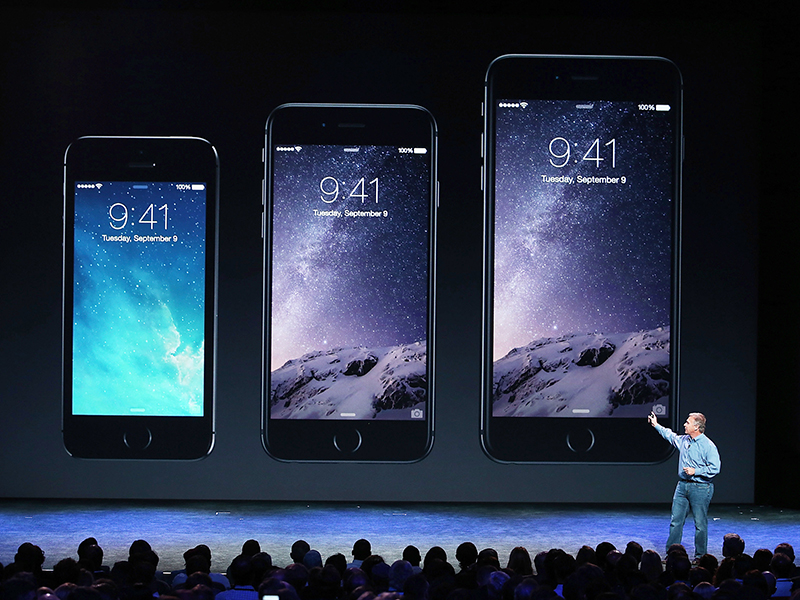 Apple's Phil Schiller shows off the next generation iPhone 6.

Ok, Apple fans, you can quit holding your breath. Today, Apple announced two new models of their iconic iPhone – the iPhone 6 and iPhone 6 Plus – and the arrival of the long-awaited Apple Watch.

Innovation is the name of the game here, with many aspects of the iPhone receiving a good beef-up. We’re talking processor, size, display, LTE and WiFi speed, you name it.

• All hail the latest addition to the Apple tech stable
• Can Apple’s new iPhone 6 match the hype?

The Apple Watch – which will likely go down in history as the shiniest smart watch ever – also looks set to create waves, incorporating iPhone functions alongside all the usual fitness tracking features you’d expect from a wearable device.

Let’s take a look at what Apple has for us.

iPhone 6 and iPhone 6-Plus

The rumours were true. The new iPhone 6 is an improvement on nearly every level.

Starting off with the size, you can choose between the 4.7-inch model or the larger 5.5-inch, appropriately named the iPhone 6 Plus.

The 4.7-inch standard iPhone 6 and the larger 5.5-inch model will both be available in new generation displays, known as Retina HD. Supposedly ‘incredibly bright,’ and sporting over 1 million pixels and over 2 millions pixels, respectively, let’s assume Apple will put paid to all those Samsung Galaxy jibes about iPhone display brightness and clarity.

Apple has leveraged this increase in resolution to bring landscape views to native apps, such as Mail, Message, Weather and more. Their hope is that app developers will fall in step and produce apps with depth and richness.

The new iPhone features the new A8 processor alongside an upgrade to the motion co-processor, to the new M8 version. We can expect the new A8 to be 50 per cent faster on the previous model.

The new phone’s LTE service (4G) was also given a shot in the arm, sporting data speeds up to 150MBps, which is faster than any NBN service Australia could hope to offer in the next 20 years.

Apple is also out to kill your credit card, or any other piece of plastic you use at the cash register. The new iPhone 6 is about to give the world of mobile payments a shake up, with Apple Pay.

With nothing more than a tap at the cash register, with your thumb pressed to the Touch ID scanner, WHAM! Money is no longer in your account. Long rumoured NFC technology has finally made it to iPhone.

This service will launch in the US in October, with the rest of the world (that’s us) to follow shortly. If this works as easily as they say, it will eliminate that pathetic excuse of sagging leather you call a wallet.

Apple Watch – Keep your life on your wrist

The ‘future’ story of Apple now moves into the realms of wearable technology, with the spanking new, all-glistening and gleaming, Apple Watch.

A little surprisingly, Apple has made the Apple Watch look like an actual watch.

Fans of old-school timepieces – yes, the ones you’d have to wind – will dig the Apple Watch’s side dial, or digital crown. A twist of the crown will give you zoom and scroll capabilities, plus a good-ol’ push button.

Not only can you initiate a call or text from your new Apple Watch, but you can also communicate via Digital Touch; a new app that transmits simple gestures, like taps, to drawings, and even your live heartbeat.

Featuring a plethora of customisable digital watch faces, Siri integration (yes, you can talk to your watch) no watch from Apple would be complete without a little fitness tracking.

Health is the key, here, with two dedicated watch apps designed to motivate you into a healthier lifestyle: Fitness app, which monitors your everyday activity; and Workout app, which allows you to plan and execute workouts.

All this data is shared with iOS’s new native Health app, or with third-party apps you give permission.

Apple Watch will work with all models of iPhone 6 as well as iPhone 5.

Check out The New Daily later this evening for a full appraisal of Apple’s new toys.