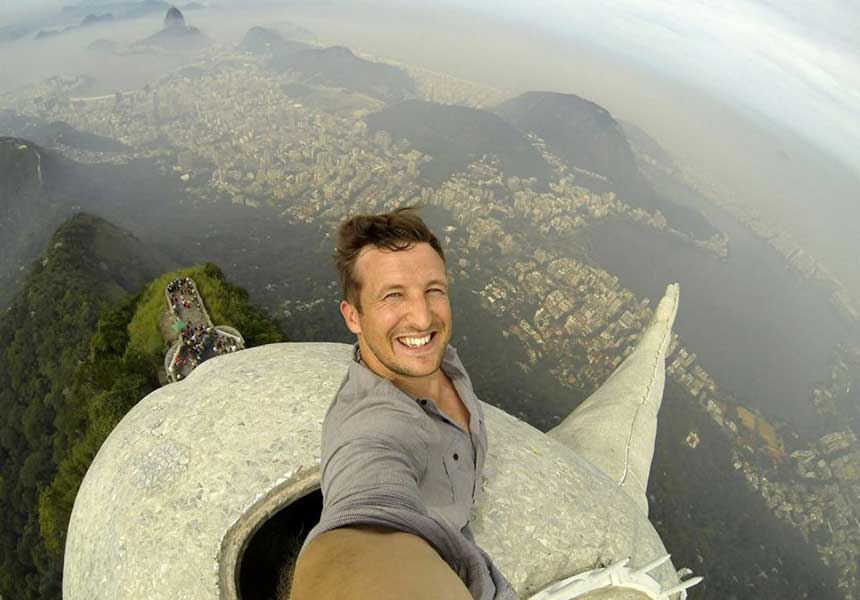 Stop what you’re doing right now and take a selfie.

Alright … are you done? Chances are you didn’t even think twice about doing that, did you?

Echoing the meteoric rise of the camera phone, the selfie – taking a photo of yourself, usually with a mobile phone camera – has become part of many people’s daily life.

30 per cent of all photos taken by people aged 18 to 24 are selfies, with more than half of those ending up on Facebook. Whether it’s facing another day of peak hour commuting, getting ready for a night out or capturing an amusing moment between friends, whipping out your camera for a quick selfie is as acceptable as drinking coffee.

Add your social media of choice, and you now have a method to visually communicate every hairstyle, meal, celebrity encounter and new pair of horn-rimmed glasses to the world, en masse.

• The Mona Lisa agrees – enough with the selfies!
• GoPro guide: The camera taking the world by storm
• Prize-winning war photos taken on an iPhone

A recent poll by smartphone manufacturer, Samsung UK, found that 30 per cent of all photos taken by people aged 18 to 24 are selfies, with more than half of those ending up on Facebook.

No doubt, they’re a fun way to share your every life event, but for each new selfie trend there’s a health and welfare study indicating how these seemingly innocent photos could point to undiagnosed psychological conditions or destructive social phenomena yet to be categorised.

Love or hate them, there’s no denying this phase in the evolution of humanity’s hyper-connectivity is the most widespread and easily accessible we’ve ever seen.

But where did it all begin? While many of you may think Mr Bean was the first person to take a selfie, a man by the name of Robert Cornelius – an American photography, from Holland – is credited with the first self-portrait photo, dating back to 1839. We know what you’re thinking; no, he didn’t use duck lips.

From those early days of grainy, black and white photography, the self-portrait became a common way to capture the person who usually stood on the other side of the camera.

The modern-day selfie rose to popularity around the time of MySpace, with users of the social media platform taking self-portraits to use as their profile photo. Then along came MySpace killer, Facebook, which coincided with the prolific rise of the smartphone, and the rest is history.

Since then, technology has advanced the evolution of the selfie 10-fold, with everything from the selfie stick – basically, a stick that holds your camera at a longer distance than your arm – and dedicated selfie smartphone apps, that allow you to add filters, frames and captions to your photo. 1. Raise your camera above your head: A selfie from a higher angle offers a more flattering view of your natural features – eyes, cheekbones, jawline.

2. Ditch The Duck Lips: Unless you’re a member of an American sorority house, duck lips don’t do anyone a favour.

3. Watch Your Background: Nothing’s worse than posting a selfie to Facebook and having everyone comment on your messy room, or worse, behind you.

4. Edit: Whether it’s built into a social media app or a standalone photo editor, throw a filter or lens effect on your selfie to spice things up a bit. Rowan Atkinson’s loveable character, Mr Bean, was quite fond of holding his instamatic camera up for a self shot, and is likely responsible for incepting many generations with the joy of taking a selfie, before the act became a worldwide phenomenon. Nothing beats the thrill of capturing a selfie of a world-class sporting event. That appears to be the attitude of many fans standing trackside at this year’s Tour de France, despite the danger is poses for them and the riders.

Sure, they score a once-in-a-lifetime selfie, but the risks have been deemed unacceptable. Expect official guidelines to be announced soon.

In the meantime, some riders are taking matters into their own hands, with the odd spectator who strayed too close to the peloton, finding their several-hundred-dollar smartphone smacked from their hand. An Israeli Facebook page, With My Besties in Auchwitz, recently sprang to infamy for featuring selfies taken by teenagers at various memorials to tragic events of history, such as concentration camps.

This type of selfie is drawing commentary from all sides of the internet, with as many detractors as there are supporters.

On Tumblr blog, Selfies At Funerals, you’ll find selfies taken at various stages of funeral attendance; from getting ready to mid-service, it’s all there. Naïve or disrespectful; you be the judge. The tweet of the selfie was apparently retweeted more than 3 million times and seen by more than 37 million people. White House officials gave Samsung a spanking for engaging The Pres in an unwitting act of clandestine marketing, which the company insists was purely coincidental.

The cult of the selfie: A snapshot of self-obsession