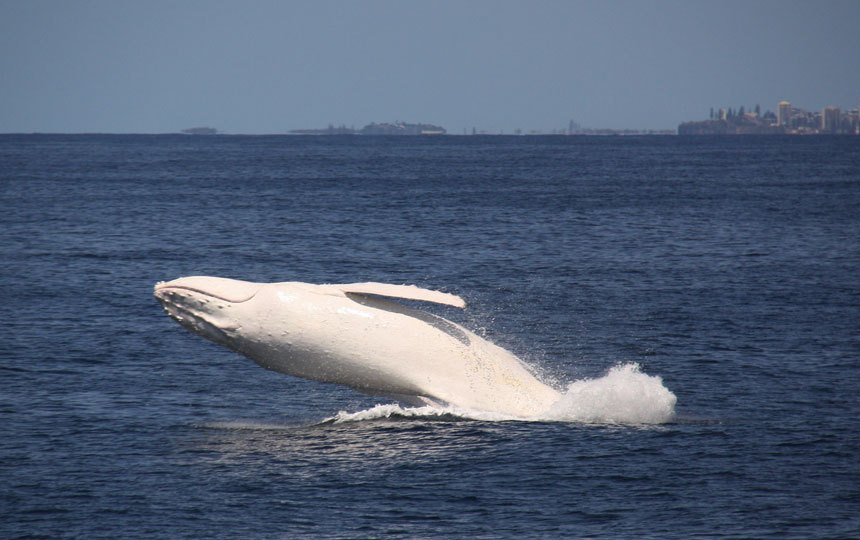 The real Migaloo leaps from the water near Port Macquarie in 2014. Photo: AAP

At first glance it looked like the whale found dead on a beach near Mallacoota was the answer to a riddle that has puzzled researchers for the past two years: Where is Ningaloo?

The white humpback was first sighted in 1991 off Byron Bay, when he was believed to be between three and five years old.

Dubbed Ningaloo, an Indigenous word for white person, he was fitted with a radio tracker and sent on his way.

But in 2020 the signal went dead, so news of a dead white whale’s discovery on what is known to have been Ningaloo’s annual migration route up the east coast raised fears that the leviathan of the deep had died.

After all, how many white whales are there?

Well, it turns out news of Ningaloo’s demise was no reason to mourn the celebrity cetacean

Authorities are working to identify the dead whale, but Macquarie University wildlife scientist Vanessa Pirotta said photos showing darkened skin under barnacles on its throat could be key.

Another major hint was that the carcass was that of an adolescent female, not an adult – a fact that immediately came to light when researchers arrived at the isolated beach, reachable only by boat, and conducted a detailed examination.

But suspicions were growing well before that.

“It seems to be most likely a white whale or at least a whale that has been a darker pigmentation that potentially has passed out at sea and washed ashore and been weathered over time,” Ms Pirotta told ABC TV on Sunday.

“Because when you can see the barnacles attached to that black area there, that indicates that was external skin because we have barnacles on the outer layer of these animals.”

“We’re piecing together the puzzle but it seems, at this stage, without genetic testing, it is … not likely Ningaloo,” she said.

Reports that famous white whale Ningaloo is dead were premature