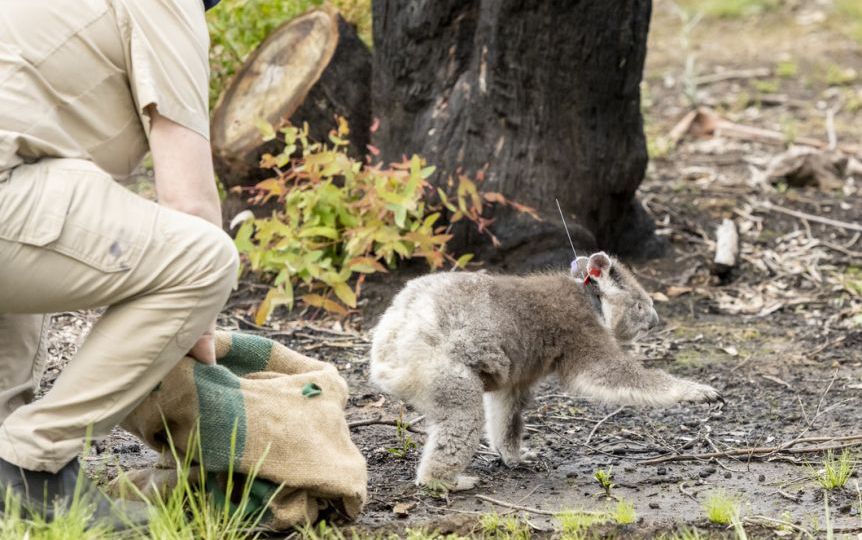 Koalas are vulnerable to fox and dog attacks when forced to the ground in search of their favoured eucalyptus fare. Photo: Zoos Victoria

In February this year, the federal government listed Australia’s beloved koala as an endangered species. Earlier this month, the daredevil greater glider joined it.

Both marsupials lost vast swathes of habitat during the Black Summer bushfires but their slide further towards extinction has not halted logging in east coast state forests.

NSW ecologist Mark Graham and veteran koala campaigner Paula Flack say it’s a special kind of madness for the state government to be spending $107 million on koala habitat projects while its own forestry outfit is felling what already exists.

One such area is Clouds Creek State Forest, inland from Coffs Harbour on the NSW mid north coast.

There’s no shortage of records showing the koala and greater glider live in and around the forest, which remains closed to the public two and a half years after much of it burned in the devastating fires of 2019/20.

But it’s currently being logged under what the Forestry Corporation of NSW says is a selective and carefully managed process to limit impacts in the fire-hit area where gliders and koalas live.

Mr Graham rejects that and says images taken at Clouds Creek days before the greater glider was up-listed from vulnerable to endangered are distressing, with some areas seemingly clear-felled.

“There are kilometres of forest being industrially logged right now, in this incredibly significant landscape, all of it burnt,” he says. “It’s multiplying the harm of the fires.”

He says in some parts of the forest logging has left gaping holes in the canopy that exceed the 100-metre gliding range of greater gliders, which rarely descend to the ground.

“It’s impossible for them to move across these major gaps in forest cover that have been generated in the last couple of months,” Mr Graham says.

“We are seeing, right now, the industrial logging of major expanses of these forests where we know that greater gliders, koalas, yellow-bellied gliders and all of these other species occur.”

Concern about logging in state forests is not confined to NSW.

In Victoria much of the greater glider’s habitat overlaps with areas earmarked for logging over the next few years, says WWF Australia ecologist Kita Ashman.

But she says logging is managed at the state level through regional forest agreements that bypass scrutiny under the federal environment laws.

It’s why she is pessimistic that federal endangered listings will do much for the glider and koala without broader reforms.

“It’s all state government. There’s no onus on industry to have to respond to that,” Dr Ashman says.

‘Australia will lose this species’

“Put simply, Australia will lose this species unless we strengthen laws to protect their homes and cease logging native forests.”

New federal Environment Minister Tanya Plibersek has promised she’ll have something to say about protections for native species when she delivers the long-awaited State of the Environment report on Tuesday.

She’s described the five-yearly snapshot, which the former Morrison government refused to release before the election, as an “alarming story” of decline, native species extinction and cultural heritage loss.

The Australian Conservation Foundation says the minister could choose to end exemptions that mean regional forest agreements are not scrutinised under the federal Environment Protection Biodiversity Conservation Act.

“The Labor Party made a commitment to undertake reforms of the Act. Obviously that’s a critical step in addressing native species decline, extinction and major threats. Logging is one of them,” says nature campaign manager Basha Stasak.

“We would hope they would be looking at this issue, through their commitments to reform the Act.”

In his landmark review of the legislation, former competition watchdog chief Graeme Samuel found there were “fundamental shortcomings” in regional forest agreements and expressed low confidence they were upholding federal protections for native forests exposed to logging.

The Forestry Corporation of NSW has defended the harvesting activity in Clouds Creek State Forest. Senior planning manager Dean Kearney says special management plans have been drafted because the area was heavily affected by bushfires in 2019.

“For Clouds Creek, it’s anticipated to be quite a light, selective harvesting. It’s just removing trees that are commercially mature and have high quality products in them,” he says.

“In any area that was subject to fire we’re doing a specific assessment of what the impact was on that local area and we’re doing additional measures for environmental protection. There’s wider buffers, there’s additional areas set aside for habitat that might be recovering.”

“This is an ongoing active management of regrowth forests that does produce timber and does allow koalas to persist in that landscape.”

Victoria’s Department of Environment, Land, Water and Planning says it supports the federal government’s decision to list the greater glider as endangered.

“This is a new requirement in Victoria’s modernised RFAs which were amended in March 2020 – signed by Victorian and federal governments – which include new mechanisms for strengthened environmental protections.”

‘Australia will lose this species’: Logging slammed as the end for koalas and greater gliders