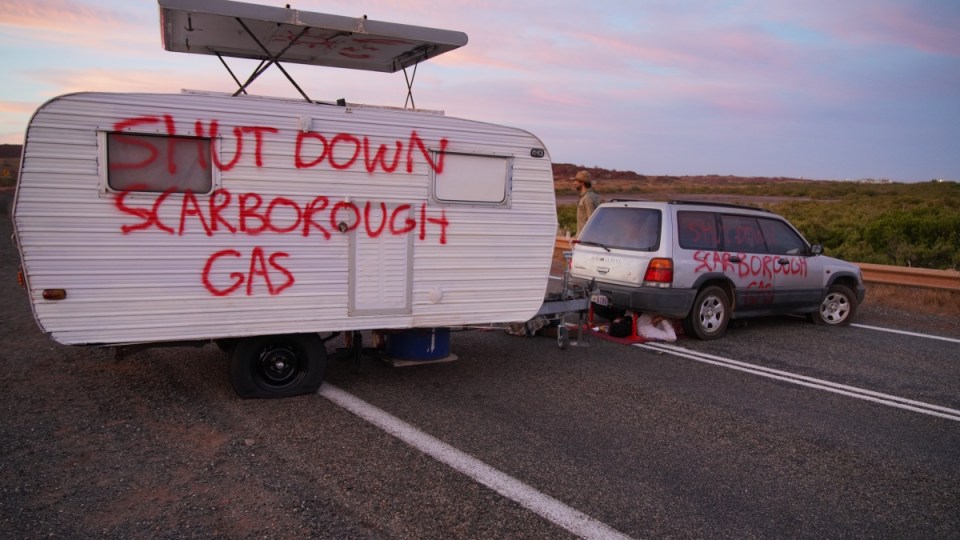 A court has been urged to halt progress on the Scarborough gas project off WA. Photo: AAP/Scarborough Gas Action Alliance

The Federal Court has been asked to halt Woodside Energy’s offshore Scarborough gas project until its impact on the Great Barrier Reef is assessed under environmental laws.

The Australian Conservation Foundation is fighting the $16.5 billion project in court, calling it a “climate bomb” that will amplify climate change harms including repeated coral bleaching events.

Woodside plans to exploit gas fields off Western Australia but ACF says because it will happen offshore, the project hasn’t been approved under the Environment Protection and Biodiversity Conservation Act.

It says the act includes an exemption for projects like Scarborough that are assessed by the National Offshore Petroleum Safety and Environmental Management Authority (NOPSEMA).

But it says the exemption does not apply if an offshore project is likely to have a significant impact on the world or national heritage values of the reef, something ACF will seek to show in court.

“If it goes ahead, the Scarborough gas mine and its Pluto extension will produce vast quantities of climate-heating gas through until 2055,” ACF chief executive Kelly O’Shanassy says.

“We will demonstrate to the Federal Court that Scarborough is likely to have a significant impact on the World Heritage-listed Great Barrier Reef if it proceeds.”

The case was filed in the Federal Court in Melbourne on Tuesday.

ACF says a victory could establish an important precedent that could affect how other projects are assessed in the future.

Late on Tuesday, Woodside confirmed ACF had sought an injunction to restrain offshore activities associated with the project.

It said Scarborough had been the subject of rigorous environmental assessments by a range of regulators including NOPSEMA, the federal environment department and WA’s Environmental Protection Authority.

“The Scarborough project is under way and proceeding to schedule after receiving all primary environmental approvals,” Woodside CEO Meg O’Neill said in a statement.

“Woodside will vigorously defend its position in these proceedings.”

It’s not the first legal challenge Scarborough has faced. Earlier this year, the Conservation Council of Western Australia lost a Supreme Court bid to overturn the project’s environmental approvals.

Before the court threw out the challenge, WA Premier Mark McGowan flagged his government could intervene if the court case threatened the state’s energy supply.

The Scarborough field, about 375 kilometres off the WA coast, is estimated to contain 11.1 trillion cubic feet of gas that will be transported via a 430-kilometre pipeline to the mainland to the Pluto LNG plant.

Much of the gas will be exported, but some will supply domestic markets.

Earlier this month Prime Minister Anthony Albanese was asked if he’s comfortable with the Scarborough project when climate scientists are pleading for an immediate end to new fossil fuel projects.

“I’m comfortable with making sure that we transition over a period of time in an orderly way (and) fixing our environment by reducing emissions and heading to net zero by 2050,” he said.

“That’s a target that’s shared by companies like Woodside and BHP and Rio Tinto. We need to make sure, in the meantime, that people do have access to energy.”

A report by the Conservation Council of Western Australia and The Australia Institute last year found the project would release 1.6 billion tonnes of greenhouse gases in its lifetime, or the equivalent of 15 coal-fired power plants.

But Woodside disputes that, saying total scope one and three emissions will be significantly less.