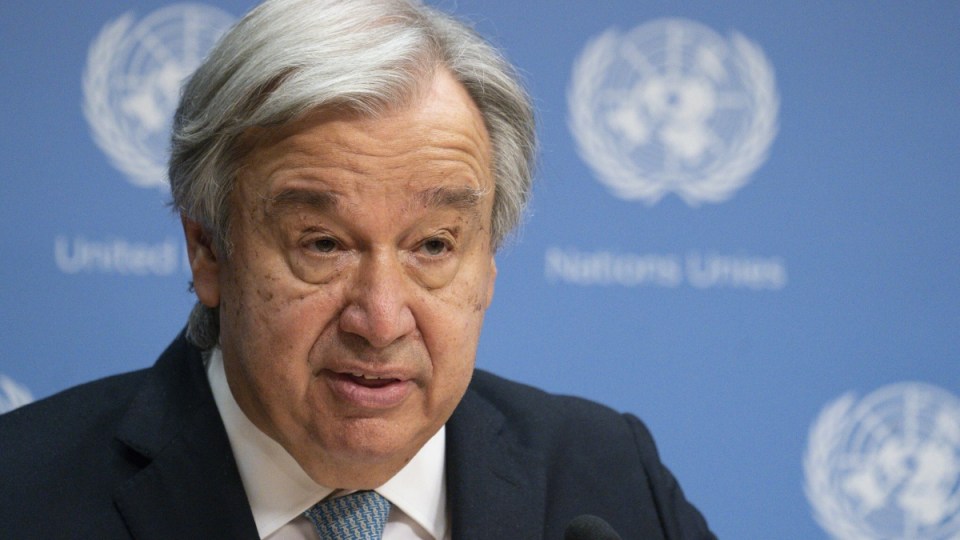 In a video address to a major climate conference in Austria, Antonio Guterres also said any new investment in fossil fuels was “delusional”.

He said major economies had doubled down on fossil fuels in response to the energy crisis exacerbated by Russia’s invasion of Ukraine.

“The war has reinforced an abject lesson: our energy mix is broken. Had we invested massively in renewable energy in the past, we would not be so dramatically at the mercy of the instability of fossil fuel markets.

“New funding for fossil fuel exploration and production infrastructure is delusional. It will only further feed the scourge of war, pollution and climate catastrophe.

“I repeat my call for G20 governments to dismantle coal infrastructure, with a full phase-out by 2030 for OECD countries and 2040 for all others.”

Mr Guterres said consumers were being punished by record oil and gas prices after a decade that saw the cost of solar and wind power, and batteries, plunge.

On Monday, the Australian Energy Market Operator warned of possible blackouts in Queensland and NSW.

Meanwhile, there have been calls for Australia to limit gas exports to ease the energy crisis that’s threatening the survival of some manufacturers.

Mr Guterres said energy security, stable power prices and a livable planet would only be achieved by abandoning fossil fuels to accelerate the transition to renewables.

From raw materials to technology, subsidies, investments, and policies, we have the tools to jump-start the renewable energy transition.

The time to use them is now.

The only sustainable future is a renewable one. https://t.co/42eVTYHilo pic.twitter.com/OJNSnyMMVV

Prime Minister Anthony Albanese has already said he won’t be turning his back on fossil fuels, with coal and LNG exports to continue as his government seeks to cut emissions by 43 per cent by 2030.

Some observers have warned Australia is at risk of falling into the so-called Norway trap of clean policies at home, but dirty ones abroad.

In 2019, a report by the Berlin-based science and policy institute, Climate Analytics, found Australia could be contributing as much as 17 per cent of global greenhouse gas emissions by 2030, if the pollution from its fossil fuel exports is counted.

AAP sought comment from the prime minister and Climate Change and Energy Minister Chris Bowen, but has not received a response to the UN chief’s comments.