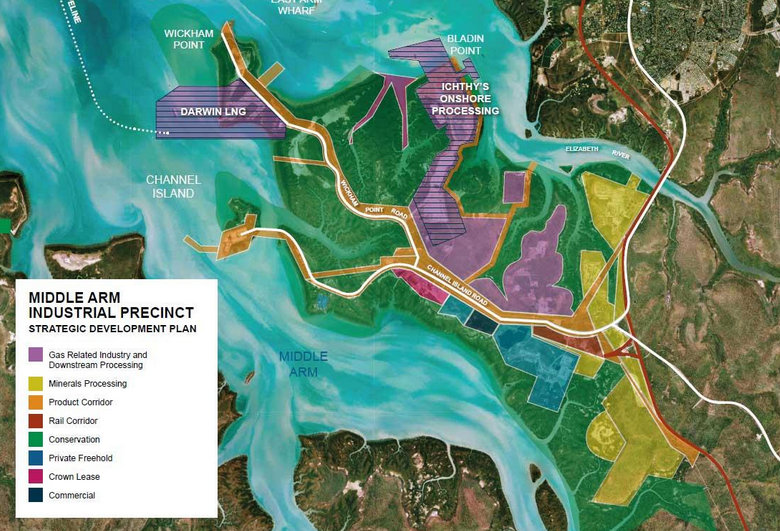 The nationally significant infrastructure project is set to create 20,000 jobs and turbocharge the regional economy, the NT government says.

But an NT risk assessment released the same day says the hub could have “significant adverse impacts” on community health.

The report also found air quality in the area may be significantly impacted.

The Middle Arm Sustainable Development Precinct is about 3km southwest of Palmerston and 13km southeast of Darwin, which have a combined population of about 160,000.

Soil and water quality could also suffer if erosion, leaks, discharge of wastewater or spills of hazardous materials occur.

Threatened species and sensitive vegetation might be adversely affected when the site, which is about the size of 750 AFL ovals, is cleared.

The potential threats were identified in a risk assessment the NT government was required to submit under the environmental approvals process.

It also flagged potential damage to the seabed and marine ecosystems during dredging, infrastructure construction and shipping operations.

Darwin’s existing port was controversially leased to Chinese company Landbridge for 99 years by the territory government in 2015.

Mr Joyce says the new project is vital for Australia’s strategic interests amid growing geopolitical tensions and will help develop Darwin into a gateway to the wealth of Southeast Asia.

The taxpayer funds have been earmarked to help build port infrastructure, including a wharf and offloading facility.

“The Morrison government is committed to assessment and approval processes that protect the environment without creating unnecessary duplication and delay that can cost our economy millions of dollars and jobs,” she said.

“It is outrageous that this plan is being called ‘sustainable development’ when it is really about Morrison government funding for the fossil fuel industry, that’s leading us to hotter temperatures and more extreme weather events,” campaign manager Jason Fowler said.

He said industrialisation in Middle Arm is also likely to lead to loss of mangroves and species, such as turtles, dugongs and dolphins.