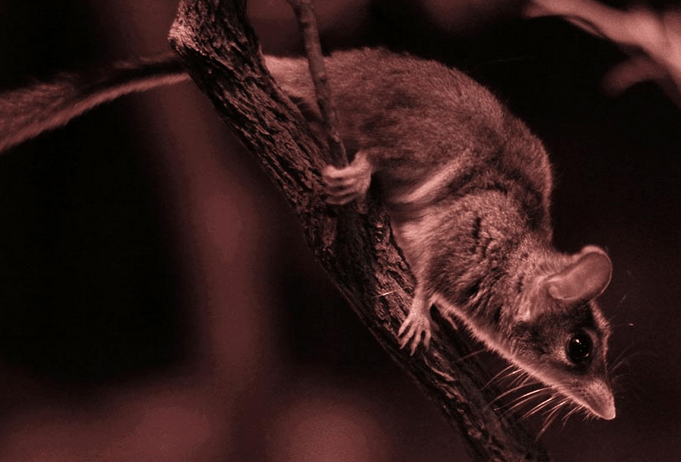 Not quite back from the brink but getting there, the red-tailed phascogale is making a comeback. Photo: S J Bennett/Bush Heritage

A victim of Australia’s exotic predator problem is making a tentative return thanks to a captive breeding program and a ring-fenced refuge.

The tree-dwelling red-tailed phascogale, which hunts insects, spiders and even small birds, was common in NSW before feral cats and foxes hunted the tiny marsupial to the point of state-wide extinction.

The species is also listed as vulnerable nationally, with just 9000 left.

Determined wildlife managers are working to re-establish a population inside a protected refuge in the Mallee Cliffs National Park in western NSW, with 14 babies bred at the Adelaide Zoo released this week.

They have joined 60 others that were delivered last year – products of a captive breeding program involving the zoo and the Australian Wildlife Conservancy.

Jo Gorman, from NSW National Parks and Wildlife, says red-tailed phascogales were once abundant across much of arid and semi-arid Australia.

But a catastrophic decline after the arrival of cats and foxes means they are now found in just one per cent of their original range.

It is hoped the recovery program centred on the Mallee Cliffs refuge could ultimately boost the national population by about 20 per cent.

The Mallee Cliffs National Park contains one of the largest feral-proof fences in the southern hemisphere and is at the heart of a groundbreaking mammal reintroduction program.

“The project … is unique, seeing 10 regionally extinct mammal species restored to NSW to recreate an assemblage and its associated ecosystem processes that hasn’t been functional for over century,” the park’s wildlife ecologist Laurence Berry said.

A recent CSIRO report blamed exotic pests for the loss of 79 native plants and animals since European settlement and warned Australia is at risk of a brutal new wave of extinctions.

Feral cats alone kill more than 456 million native mammals, 272 million birds, 92 million frogs and 446 million reptiles every year and have contributed to the extinction of 27 native species so far.

The CSIRO has called for a truly national plan that combines world-class biosecurity controls to keep new pests out with the latest technology to find and suppress the ones that are already here.

Last month, a damning new audit found most of Australia’s threatened species are not being monitored.

The Australian National Audit Office also found there is no effort to determine if species-specific rescue plans are working.

In the case of the red-tailed phascogale, conservation advice is in place to guide priority actions to help the species, the federal environment department said.

More than $2.3m was spent in recent years restoring and replanting its habitat.

Back from the brink: Tiny bush carnivore gets a new lease on life