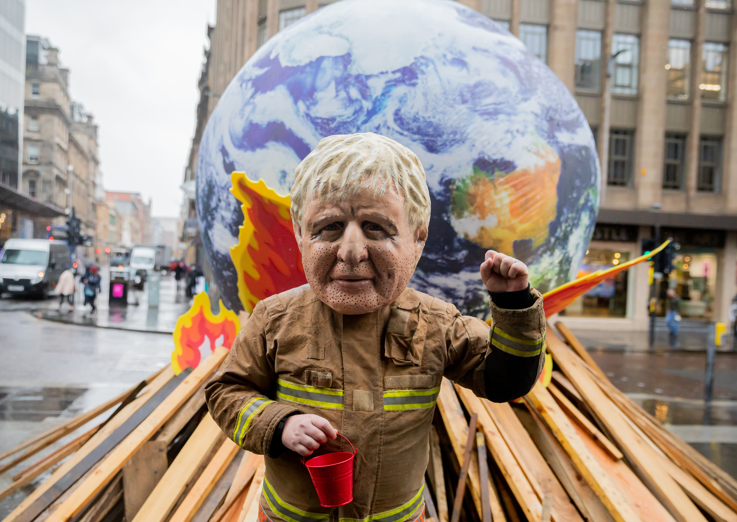 A protester in a Boris Johnson mask demands action as the earth burns on a climate bonfire. Photo: Getty

A new draft agreement drawn up for the last scheduled day of the UN climate conference in Glasgow  has watered down the much tougher wording of an earlier version that said only concerted global action can avert a climate catastrophe.

While retaining its core demand for countries to set tougher climate pledges, demands that nations phase out subsidies for the fossil fuels are significantly weaker.

The latest draft also acknowledges developing nations such as India and China face an uphill battle to attain prosperity without cheap and reliable energy sources.

To increase pressure for a strong deal, protesters planned to rally outside the COP26 venue, where activists had hung ribbons with messages imploring delegates to protect the Earth.

Overnight, activists deflated the tyres of luxury vehicles parked around the Scottish city.

The conference set out with a core aim: to keep alive the 2015 Paris Agreement’s aspirational target to cap global warming at 1.5 degrees Celsius above pre-industrial levels, and so avoid the worst impacts of climate change.

The latest draft is a balancing act – trying to take in the demands of both climate-vulnerable nations and large economies reliant on fossil fuels.

The retention of a pledge for countries to upgrade their climate targets in 2022 will be welcomed by poorer nations that want more action to tackle worsening floods and wildfires and rising sea levels.

But it was couched in weaker language than a previous text and failed to offer the rolling annual review that some developing countries have pushed for, but Washington in particular opposed.

Countries are currently required to revisit – and preferably raise – their pledges every five years.

The document does still spell out that the world needs to cut greenhouse gas emissions by 45 per cent from 2010 levels by 2030 and to net zero by 2050 to cap global warming at 1.5C, setting the benchmark that future climate pledges will be measured against.

On fossil fuels, the draft included two words that dilute an earlier version, which had boldly stated that the world should pledge to phase out subsidies for fossil fuels in general.

Now the text includes the word “unabated” before coal, and the phase-out of “inefficient” subsidies for fossil fuels. Unabated coal generation is where there is no technology in place to remove resulting carbon dioxide emissions.

Arab nations, many of which are big producers of oil and gas, had objected to the wording in the earlier draft.

The paragraph now reads: “(COP26) calls upon Parties to accelerate the development, deployment and dissemination of technologies and the adoption of policies for the transition towards low-emission energy systems, including by rapidly scaling up clean power generation and accelerating the phase-out of unabated coal power and of inefficient subsidies for fossil fuels.”

After nearly two weeks of talks, the almost 200 countries represented at COP26 also remain at odds on a range of other issues.

Questions of finance loom large, with developing countries pushing for tougher rules to ensure that rich countries, whose historical emissions are largely responsible for heating up the planet, offer more cash to help the poorest adapt to climate impacts.

So far, rich countries have failed to meet the goal of $US100 billion a year in climate finance that they set in 2009.

Ministers are also attempting to finish the contentious rules that will put the Paris agreement into practice, requiring agreement on long-standing disputes over carbon markets and transparency.

A final deal will require the unanimous consent of the nearly 200 countries that signed the Paris Agreement.