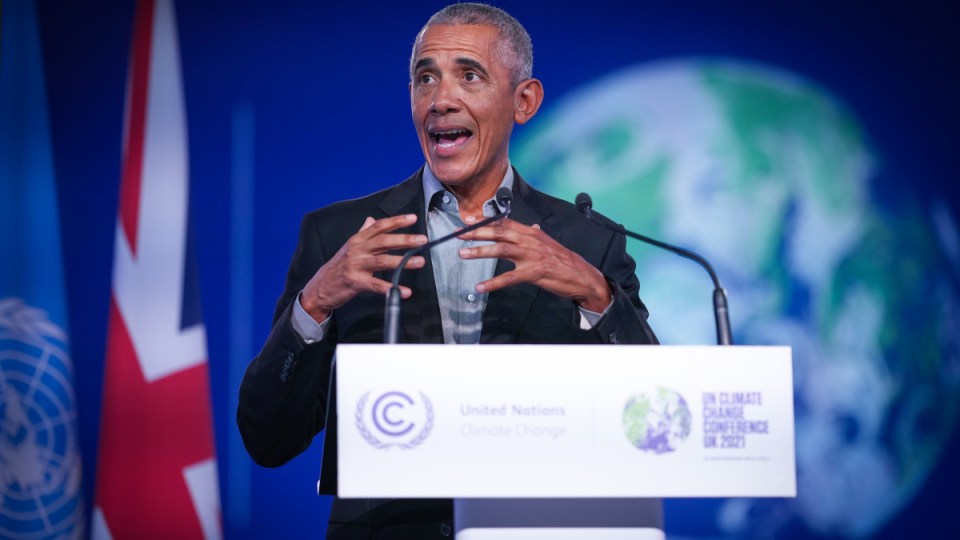 Former US president Barack Obama has criticised Russia and China for not attending the COP26 talks. Photo: Getty

Former US president Barack Obama has urged young people to pressure their leaders to do more to combat climate change, picking out Russia, China and his successor Donald Trump for particular criticism.

“You are right to be frustrated,” he said.

“Folks in my generation have not done enough to deal with a potentially cataclysmic problem that you now stand to inherit.”

Mr Obama told delegates he found it “particularly discouraging” to see the leaders of China and Russia skip the talks and called out Republican politicians in the US for hindering progress on climate action.

Plans to combat climate change by Russia, China and others “so far reflect what appears to be a dangerous lack of urgency and a willingness to maintain the status quo on the part of those governments, and that’s a shame”, he said.

Mr Obama arrived at the start of the crucial second week of the summit, as negotiators work to iron out details of an agreement to clarify and strengthen the 2015 Paris Agreement climate pledges.

He also sought to assure world leaders the US was back at the negotiating table as a credible partner.

Earlier on Monday, Mr Obama appeared on a panel with leaders from island nations vulnerable to climate-fuelled sea-level rises.

Speaking directly to Mr Obama, Fiji’s Prime Minister Frank Bainimarama noted the US and other developed nations failed to meet a 2020 deadline for providing $US100 billion ($A135 billion) a year in promised funding for those countries.

Rich nations now say the money will be available in 2023.

“Among others, the USA is woefully short of paying its fair share of climate finance,” Mr Bainimarama said.

“Now we, the most vulnerable, are told to suck it up and wait.”

“Channel that anger, harness that frustration, keep pushing harder and harder for more because that’s what required to meet this challenge,” he said.