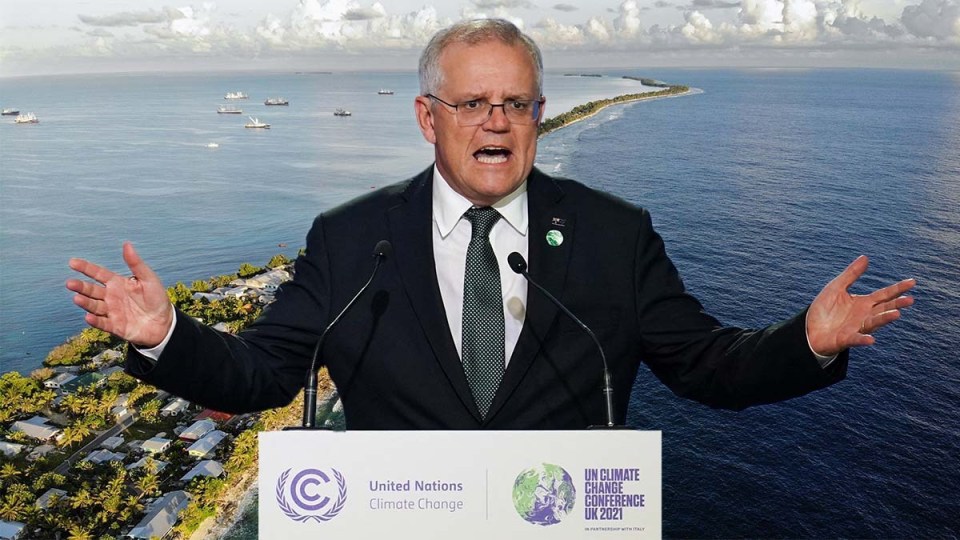 Pacific leaders want Scott Morrison to advocate for the nations that are most vulnerable to climate change. Photo: TND

Australia has been called upon to use its diplomatic and economic clout to advocate for low-lying Pacific nations on the world stage.

Of the world’s four atoll nations, three count Australia as one of their biggest neighbours: Kiribati, the Marshall Islands and Tuvalu.

For these countries, climate action is about survival, and their neighbour is poised to play a key role at COP26 in Glasgow.

“And when there’s a problem at home, you look at your big brothers first, before you look to the other neighbours.”

New research from the World Bank has revealed that much of the Marshall Islands, including a third of all buildings in the capital, Majuro, will be permanently inundated if sea levels rise by just one metre.

This would make entire towns uninhabitable, and traditional burial grounds are already being washed away by the sea.

Mr Nemra feels that Australia should use its presence at COP26 to highlight the plight of these Pacific nations to the world.

Tuvalu Foreign Minister Simon Kofe pointed to values such as kaitasi (shared responsibility) and fale-pili (being a good neighbour) as reasons why Australia should step up its climate commitments.

“We emphasise that polluter countries must play a major role in resolving the state of today’s global environment and clearly highlight the common but differentiated responsibilities of all parties in overcoming climate change,” Mr Kofe told TND.

At COP26, this means standing up on behalf of the Pacific.

“Australia has a role to advocate, through its larger economy,” Mr Nemra said.

New research from the Grattan Institute has found that the Australian government’s current plan isn’t enough to achieve its goal of net-zero emissions by 2050.

But for some, even this goal is too late.

While many Pacific nations sent delegations to Glasgow, only the leaders of Fiji, Palau and Tuvalu were able to make it in person.

Closer to home, Mr Kofe said that “current global mitigation commitments and promises will not save nations like Tuvalu” but added that they’re better than nothing.

“We must realise that, right now, not all climate action will help all countries, but all action is imperative,” he told TND.

“We must recognise commitments that pinpoint the needs of different nations and that urgently fulfil these needs, especially the needs of low-lying atoll nations, which are most threatened.”

Renewable energy advocates argue that Australia has enough cash, land, sunshine and wind to be at the forefront of the green economy.

In the Pacific, this is seen as a win-win.

“From our small island countries, we’re not saying, ‘Shut down your economy’ by any means. We’re asking them to do the smarter things, to utilise new technologies, and to reduce the amount of emissions in the atmosphere,” Mr Nemra said.

Christiana Figueres, a key architect of the 2015 Paris Accord who isn’t bound by diplomatic courtesy, went as far as to call Australia’s climate commitments “irresponsible” and “suicidal”.

The 2015 Paris Accord stipulated that wealthy countries would pool together $100 billion each year by 2020 to help more vulnerable nations deal with the immediate effects of climate change.

“I think what we’re asking is not a lot,” Mr Nemra said, pointing out that his country is a relatively tiny polluter.

“We want the opportunity to do what we can and provide the necessary mitigation and adaptation through these finances that were pledged six years ago, and that’s yet to be fulfilled.”

This money is essential to maintain projects like sea walls and protect drinking water wells.

On Tuesday, Mr Morrison increased Australia’s commitment to help the Asia-Pacific region mitigate and adapt to climate change to a total of $2 billion over the next five years.

“We are looking at legal, digital and diplomatic solutions to ensure that Tuvalu will remain a sovereign and integral nation even if the most dire impacts of climate change are realised,” he said.

The Marshall Islands’ climate envoy Tina Stege, who is in Glasgow, was more blunt: “I don’t think it’s acceptable to anyone in this world to write off a country.”

‘A big brother’: Pacific nations want Australia to be a better advocate for the region at COP26