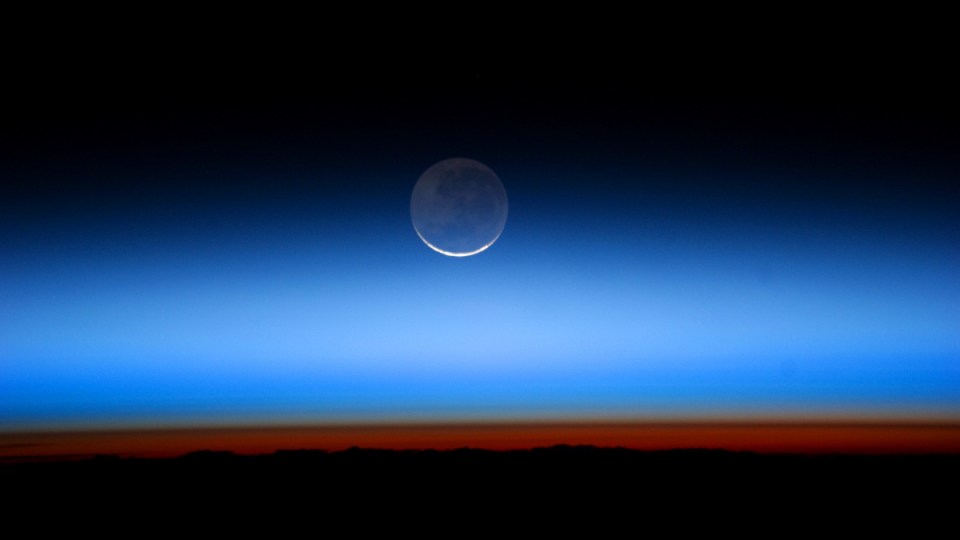 An image taken from the International Space Station in 2011 shows Earthshine on the Moon. Photo: NASA

Attention aliens from outer space: If you think the Earth is looking less shiny that it was 20 years ago, well, your goggle eyes aren’t deceiving you.

Earth-bound scientists are equally surprised at the extent to which our planet is reflecting less light.

A reduction in the amount of low-lying reflective cloud over the warming ocean is apparently to blame.

The evidence for the Earth being less twinkly was found in satellite measurements but also from analysis of what’s known as ‘earthshine’.

Earthshine was first explained by Leonardo DaVinci (c. 1510) as sunlight reflected from the dayside Earth to the dark portion of the lunar disk as seen from the nighttime Earth.

You can see earthshine on nights of a crescent moon, when the whole circle shape is visible but dimly lit.

The earthshine data in the study was gathered from 1998 to 2017 by the Big Bear Solar Observatory in Southern California.

What were the findings?

Earth reflects about 30 per cent of the sunlight that shines on it.

The amount of light reflected by Earth is called the ‘albedo’.

According to a statement from the American Geophysical Union (AGU), the Earth is now reflecting “about half a watt less light per square metre than it was 20 years ago, with most of the drop occurring in the last three years of earthshine data”.

That’s the equivalent of 0.5 per cent decrease in the Earth’s reflectance.

“The albedo drop was such a surprise to us when we analysed the last three years of data after 17 years of nearly flat albedo,” said Professor Philip Goode, a researcher at New Jersey Institute of Technology and the lead author of the new study.

So what does it mean?

As the AGU explains it: Many scientists had hoped that a warmer Earth might lead to more clouds and a more reflective planet, as a means to “moderate warming and balance the climate system”.

But that hasn’t happened.

According to satellite measurements made as part of NASA’s Clouds and the Earth’s Radiant Energy System project, there has been “a reduction of bright, reflective low-lying clouds over the eastern Pacific Ocean in the most recent years”.

Meanwhile, the eastern Pacific has increased its surface temperatures, a consequence “of the reversal of a climatic condition called the Pacific Decadal Oscillation, with likely connections to global climate change”.

Meaning one bad thing feeds the other.

A dim view: Earth is losing its shine because of greenhouse gases