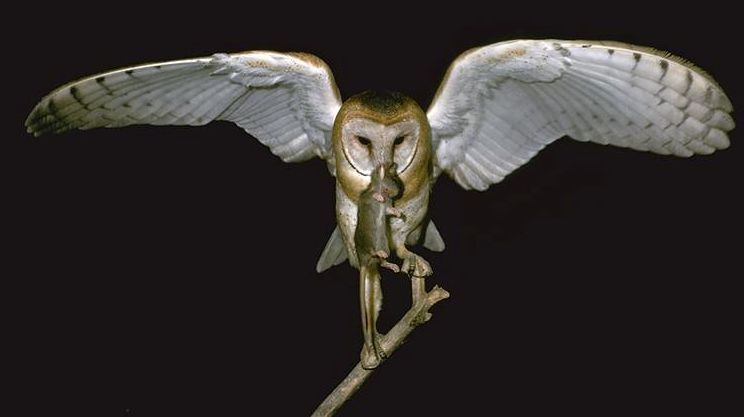 As a mouse invasion spreads through New South Wales and Queensland, researchers are investing in a natural hero … the humble barn owl.

South Australia’s Yorke Peninsula has been a popular testing ground for the hypothesis that barn owls, which are found across Australia, could be good pest controllers.

“We’re looking at developing a project that looks at putting nest boxes in more places in the landscape to provide a place for the barn owls and hopefully increase those barn owl predator numbers,” Mr Barr said.

“What we find and what we have reported from landholders is they find the barn owls nesting in barns, sheds and in chimneys of houses.”

“That’s come from a slight shift in agricultural practices with the no-till management practice of leaving the stubbles in the crop, which is great for soil and erosion mitigation and also for building up organic content in the soil,” he said.

“But that change in practice also means that without tilling [the soil], the mouse burrows and holes remain … so it’s a bit of a balancing act with farm management.”

He said studies undertaken in other similar Mediterranean climates in Israel, Spain and the USA showed promise.

“The science is there,” Mr Barr said.

“By enhancing avian predators, and that’s anything that hunts rodents … that can aid in reducing rodent damage in agricultural settings.

“What we need to do in SA and Australia-wide is to test that hypothesis in our local area and our Australian agricultural settings.”

Mr Barr’s search for funding was ignited by a previous study conducted on the southern end of Yorke Peninsula.

In 2017, student researcher Kelly Meaney paved the way by creating an Australia-first study into whether the native eastern barn owl could help reduce “costs associated with rodent control”.

“I think we achieved that,” she said.

Ms Meaney said that with help from interested landholders, 11 nest boxes with external cameras were installed across a small area.

“By the end of the study, nine out of 11 nest boxes were colonised by barn owls, eight out of these nine were used for breeding by barn owl pairs, and from these eight nest boxes, a total of 35 baby owls were fledged,” she said.

The nest boxes that Ms Meaney designed were specifically fashioned to suit Australia’s climate and were built by a local “nest box guru”.

“We also had to think about the specific kind of predators that might threaten things like barn owls — having it on a pole that is metal so that things like cats and foxes could not climb was really important as well,” she said.

Ms Meaney said while other studies conducted in Australia used day-time predators, there were advantages to using nocturnal barn owls to hunt the mice.

“They’ve got incredible hearing and incredible eyesight, so they’re just perfect for nocturnal hunting,” she said.

“And mice make up 90-plus per cent of their diet, so that’s really good in this instance because we don’t want them targeting things like dunnarts and native species that we’re trying to protect.”

“So, in the six months that we were actively monitoring the owls, and this is out of nine pairs and 35 owlets, they were able to eat 5,000 mice,” she said.

Ms Meaney was confident that with some refinement to her project, barn owls could be used to somewhat control house mice populations.

“I’m not sure it would be enough for farmers to completely stop using rodenticides,” she said.

“That’s why this is all part of what’s known as an ecologically integrated management system, so they’ll also be implementing things like habitat modification such as reducing the grain load on the crops.”

“In terms of owls actually being able to regulate or control a mouse outbreak that’s certainly not one of the things that happens, unfortunately,” Mr Henry said.

“There aren’t enough owls to deal with the thousands and millions of mice that end up breeding to really high numbers in a mouse outbreak.

“Mice start breeding when they’re six weeks old and they can have a litter every 19 to 21 days after that.

“You would need literally huge numbers of owls, cats and foxes and all sorts of other predators to actually even make the smallest dent on a mouse population that was outbreaking.”