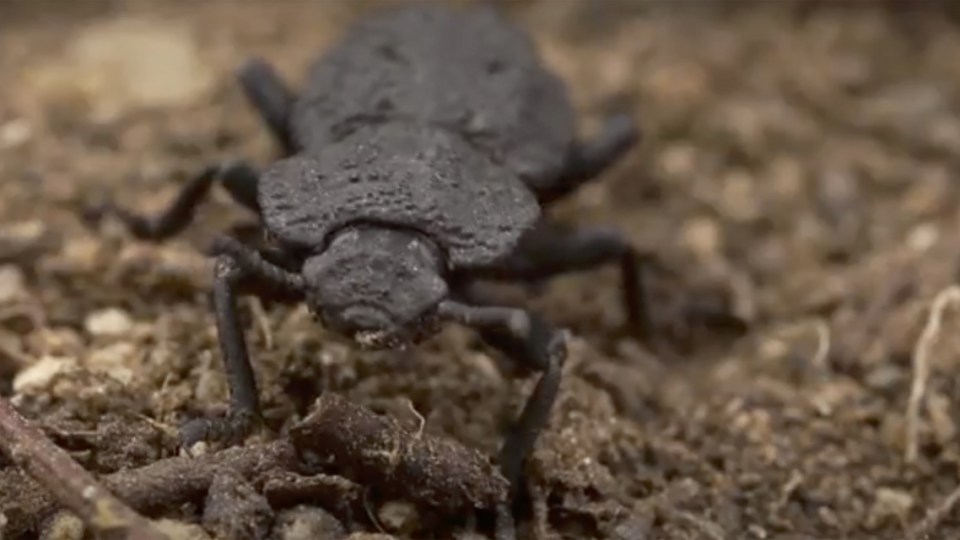 The diabolical ironclad beetle can take on a load of at least 39,000 times its body weight. Photo: University of California, Irvine

Despite its name, the ‘diabolical ironclad beetle’ isn’t in league with the devil. In fact it does no harm – unlike carpet beetles that chew on fabrics, and weevils that ruin food.

The ‘diabolical ironclad beetle’ chews on dead wood and mushrooms and slips between the bark and the trunk of a tree to rest peacefully.

But as critters go, it’s a little freaky. For one thing, in beetle terms, it’s almost immortal, living for up to eight years, where most beetles are dead within a few weeks of being born.

Secondly, it’s so tough, you can drive a car over the ‘diabolical ironclad beetle’. Having the good sense to feel threatened, it might play dead for a while, but will then move on to living its blameless life.

In fact, its exoskeleton is so tough, that pinning one to a board – as a collector might do with a butterfly specimen or spider – requires the use of a drill. Trying to push a pin through its thorax is just too difficult.

As it goes with enigmatic creatures with super powers, it’s inevitable that the military will eventually get involved and try to exploit its abilities.

The problem of metal fatigue and jet turbines

The US Air Force Office of Scientific Research is backing a joint engineering project from the University of California, Irvine (UCI) and Purdue University: the researchers are investigating how and why the diabolical ironclad beetle is so robust.

Why? Because they hoped the beetle might tell them how to solve fatigue problems in various kinds of machinery, notably in jet planes where failure of a part can be catastrophic.

Could the diabolical ironclad beetle show a way to increase the lifespan of plane parts, and enable more reliable predictions of failure?

Hang on! How strong are they?

That was the first question. A team led by UCI professor David Kisailus “tested the limits of the beetle’s exoskeleton and characterized the various structural components involved by looking at CT scans.”

Firstly, Dr Kisailus tested the beetle’s legend by running over it in his Toyota. The beetle played dead for a while and then wandered off in no great hurry.

In the lab, using compressive steel plates, the Kisailus’s team found that the diabolical ironclad beetle can take on an applied force of about 150 newtons – a load of at least 39,000 times its body weight – before the exoskeleton begins to fracture.

According to a statement from Purdue: “That’s more impressive than it sounds: A car tire would apply a force of about 100 newtons if running over the beetle on a dirt surface. Other terrestrial beetles the team tested couldn’t handle even half the force that a diabolical ironclad can withstand.”

The researchers found that that the diabolical ironclad beetle’s “super-toughness” lies in its two armour-like ‘elytron’ that meet at a line, called a suture, running the length of the abdomen.”

The following video shows you the suture:

In flying beetles, the elytra is the hard casing that protects wings when the beetle is walking around.

The diabolical ironclad beetle doesn’t have wings. Instead it utilises the elytra and the connective suture – where the two casings meet, like pieces of armour – to help “distribute an applied force more evenly throughout its body.”

“The suture kind of acts like a jigsaw puzzle. It connects various exoskeletal blades – puzzle pieces – in the abdomen under the elytra,” said Dr Pablo Zavattieri, Professor of Civil Engineering at Purdue University.

When seen in cross-section, where the two casings meet, the joining line does look like that of a jigsaw puzzle.

Zavattieri’s lab followed up these investigations with extensive computer simulations and 3D-printed models that isolated certain structures to better understand their role in saving the beetle’s life.

Each strategy dissipates energy to circumvent a fatal impact at the neck, where the beetle’s exoskeleton is most likely to fracture.

Even if a maximum force is applied to the beetle’s exoskeleton, “delamination allows the interconnecting blades to pull out from the suture more gently.”

If the blades were to interlock too much or too little, the sudden release of energy would cause the beetle’s neck to snap.

Is any of this useful for the airforce? Yes!

Dr David Restrepo, who worked on the project as a postdoctoral researcher, in a prepared statement from Purdue said:

“An active engineering challenge is joining together different materials without limiting their ability to support loads. The diabolical ironclad beetle has strategies to circumvent these limitations.”

In the gas turbines of aircraft, metals and composite materials are joined  with mechanical fasteners. This fastener adds weight and introduces stress that could lead to fractures and corrosion.

“These fasteners ultimately decrease the performance of the system and need to be replaced every so often,” said Dr Maryam Hosseini, who worked on this project as a PhD. student and postdoctoral researcher in Zavattieri’s group.

“But the interfacial sutures of the diabolical ironclad beetle provide a robust and more predictable failure that could help solve these problems.”

Can somebody please get the diabolical ironclad beetle a cape — and maybe a nice mushroom to chew upon.

Scientists have a crush on the ‘diabolical ironclad beetle’, so tough even a car can’t squish it