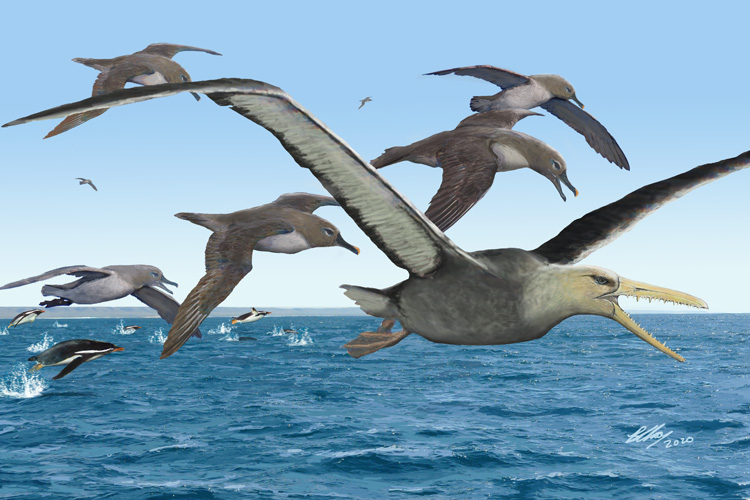 Think of this: you could lie four small children end to end along the 3.5 metre wingspan of a wandering albatross. It’s the bird with the biggest wingspan in the world.

When seen up close, on land, their proportions are so out of whack as to make them look like a freak-show creation: ungainly, and hard to make sense of.

The sky is where they are meant to be. They’re built to rule the mighty Southern Ocean.

But up until about two million years ago, albatrosses were an also-ran in Antarctic waters. The biggest bird in the neighbourhood was twice its size.

Reigning supreme at that time was a group of giant birds called  pelagornithids – or bony-toothed birds – the biggest of which, according to fossil records, had a wingspan up to 6.4 metres.

Which means you could lay out eight toddlers end-to-end for a nap!

But as as the ancient birds’ name suggests, they had a weird set of bony teeth. Not covered in enamel, but in keratin, the same protein found in our hair, skin, and fingernails – and freaky enough to scare the kiddies, if not actually feast on them.

Where did the giant toothed bird come from?

Fossils of pelagornithids have been found all over the world. They  emerged in the period after the death of the dinosaurs 66 million years ago, wiped out by an asteroid.

The fact that they got so big – and ranged over an Antarctica that wasn’t icebound or routinely cold enough to warrant a jumper – is the subject of a new paper.

The lead author, Peter Kloess, in an interesting piece at The Conversation, said the first pelagornithids “were about the size of modern gulls.”

The earliest pelagornithid remains are 62 million year-old, found in sediments in New Zealand. 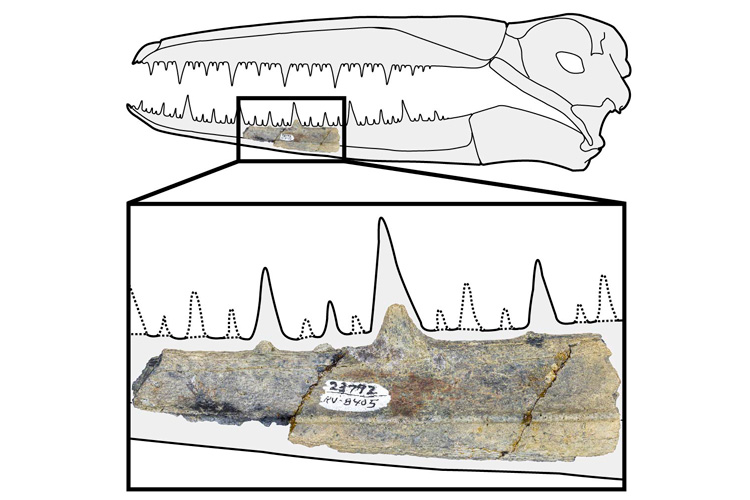 This 13-centimetre segment of fossilized jaw dates from 40 million years ago. The skull of the bird would have been about 60 centimetres long. The pseudo-teeth, originally covered with keratin, would have been up to 2.5 centimetres long. Image: UC Berkeley/Peter KloessIn 2015, Mr Kloess was a newly arrived graduate student at the University of California, Berkeley when he “stumbled” over some fills that had been collected in the 1980s from Seymour Island, off the northernmost tip of the Antarctic Peninsula.

“I love going to collections and just finding treasures there,” Mr Kloess said in a university statement.

“Somebody has called me a museum rat, and I take that as a badge of honor. I love scurrying around, finding things that people overlook.”

Three were two fossils of interest – a foot bone, and a section of jaw that came from a bird with a skull that would have been up to 60 cm long. These had been sitting in a drawer for years, waiting to be described.

Seymour Island, near the tip of the Antarctic peninsula, is an ancient giant-bird graveyard. Fossils described in the new study came from points 1 and 6. Graphic: Scientific ReportsReviewing the original notes (by former UC Riverside student Judd Case, now a professor at Eastern Washington University), Mr Kloess realised that the fossil foot bone – known as a tarsometatarsus – “came from an older geological formation than originally thought.”

“It is the largest specimen known for the entire extinct group of pelagornithids.”

But what about those teeth?

Modern birds don’t have heavy jaws – and this means they don’t have teeth. And in fact the giant pelagornithid, “the bony-toothed bird”, didn’t sport a set of deeply-planted teeth that could be used for chewing.

As Peter Kloess describes it: “The bony projections, or struts, on their jaws resemble sharp-pointed teeth, though they are not true teeth, like those of humans and other mammals.

“Called pseudoteeth, the struts helped the birds snag squid and fish from the sea as they soared for perhaps weeks at a time over much of Earth’s oceans.”