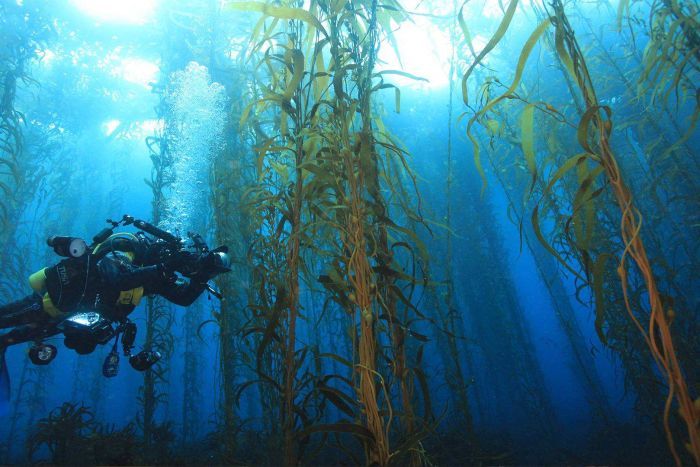 As his boat bobs on the Tasman Peninsula’s emerald waters, veteran diver Mick Baron leans back and soaks in the morning sun.

Behind him, seals laze in a half slumber on slick rocks that stand at the foot of towering sea cliffs – the entrance to a diver’s paradise.

These waters in eastern Tasmania are one of a handful of ocean “hot spots” that scientists say are warming at a faster rate than the global average.

The “chronic” warming has wiped out 95 per cent of giant kelp forests, pushed fisheries to the brink, diseased much of the state’s oyster stocks, and heralded the arrival of new, invasive species.

Baron, who owns Eaglehawk Dive Centre, has been exploring these waters for 50 years – but the environment he knew as a boy is vastly different to the one he knows now.

As gulls circle overheard, the now-65 year-old fondly recalls memories of giant kelp forests so thick “you couldn’t put a boat in there”.

“When we first started [the dive centre], giant kelp was everywhere, all along here, in any little alcove [it] was so thick, you had to part it with your hands as you were swimming,” Baron says.

“We still get calls [from people saying], ‘Oh, I’d like to come down and [see the kelp forests]’.

Few other Tasmanians have witnessed first hand the drastic transformation of the once-thriving underwater landscape from its heyday to its demise, but Baron says the kelp forests were once described as the state’s “most accessible wilderness”.

“In December of 2015 the temperatures along here were about 14.5 degrees [Celsius]. Within two weeks – it’s hard to believe – it jumped to over 17 degrees,” Baron says.

“In the ocean that’s a massive change. It was a shock to the system.

By April there was nothing left. Nothing. Not a single strand of kelp was left.’’

After researching the decline of kelp forests around the world, Canadian marine biologist Kira Krumhansl describes Tasmania’s losses as “shocking” and “tremendously alarming”.

“Tasmania is certainly on the very high end in terms of the magnitude of losses that we’ve seen over the last several decades. It’s quite concerning,” she says.

“What’s happening in Tasmania is a demonstration of what the future of kelp forests might be in other regions that may not have warmed quite as fast or to the extent that Tasmania has.”

According to scientists from the CSIRO and the Institute for Marine and Antarctic Studies (IMAS), the sea surface temperature off Tasmania’s east coast is warming at a rate of 2.3 degrees per century – equating to roughly four times the global average.

This measurement is based on data collected daily since the 1940s from a buoy off Maria Island.

Data from the National Oceanic and Atmospheric Administration agrees on the 2.3-degree increase, but says this amounts to just twice the global average.

The discrepancy comes down to a disagreement over the Earth’s average ocean temperature due to the variables being used to measure sea surface temperature, including different ocean depths, objectives, technology and time scales.

But there is consensus Tasmania’s east coast is warming far more rapidly than the rest of the world.

Gretta Pecl, a professor and director of the Centre for Marine Socioecology at the University of Tasmania, says there are roughly 24 regions in the world that are considered ocean “hot spots” – known as a body of water in the top 10 per cent of ocean warming.

She says eastern Tasmania is “at the pointy end” of the scale, and says other hot spots include the waters off the south-west of Madagascar, the Galapagos Islands, the Arctic Circle and the south-western tip of Australia.

“Tasmania gets hit with a double whammy,” she says.

It gets the underlying warming that most of the rest of the ocean experiences, as well as a change in current system.’’

A large wind system, known as a “gyre” spins above the Pacific Ocean, influencing the East Australian Current (EAC) beneath it, which tracks south along the edge of the continental shelf.

“As the atmosphere above the Pacific warms, that gyre speeds up, so it’s literally a spinning wind field that then strengthens the EAC and physically pushes it further and stronger down our coast,” Professor Pecl says.

As the EAC extends further south, it pushes warmer, low-nutrient waters towards Tasmania, bringing with it a whole host of tropical species.

“This is not just a little pulse that’s come and gone,” reef ecologist with the Institute for Marine and Antarctic Studies Scott Ling says.

“This has been a large directional change in the marine environment that’s among the strongest signals of warming for reef systems anywhere in the world.

People the world over are looking to Tasmania to understand the changes that may already be happening in their backyard.’’

From temperate to tropical

Despite being known as the gateway to Antarctica, Tasmania is now home to reef-building corals that have made a home in Bass Strait.

“What we’re seeing is these really interesting changes that confirm our suspicions about how warming is going to completely transform temperate reef systems into something more like a coral reef,” Dr Ling says.

The spiny creatures have wreaked havoc on the delicate underwater world, devouring kelp forests at a rapid rate and stripping the sea floor of any life – leaving desolate urchin barrens in their wake.

“We’ve gone from about 3 per cent of the east coast as barrens owing to the long-spined sea urchin to more than 15 per cent in that period. We’ve gone from just a handful of urchins to now an estimated 20 million since 1978,” Dr Ling says.

Scientists predict more than half of Tasmania’s east coast will be nothing but bare rock in future years if climate change doesn’t abate.

It is a challenging time but a key message out of this is an ounce of prevention is worth a tonne of cure,’’ Dr Ling says.

With temperatures predicted to climb further and ecosystems increasingly unstable, scientists have found themselves in uncharted waters.

“Very small changes in temperature can have a massive impact on an ecosystem and as the temperature’s been creeping up it’s now crossed this critical threshold for the biology,” Dr Ling says.

Despite the outlook, Dr Ling says he’s hopeful that with careful, ongoing management, a resilient underwater landscape can be created.

“If we can better manage the habitats that underpin these fisheries and the biodiversity of these areas, then we’re doing what we can locally,” he says.

“What we’ve learned here in Tasmania and the world over is we actually need to throw out the textbooks from back in the day and relearn these ecosystems.”

All the way from Canada, Dr Krumhansl agrees.

“Tasmania is certainly helping to lead the way in those efforts,” she says.

“There really is a huge powerhouse of research going out of Tasmania that has done a fabulous job of highlighting the mechanisms behind the losses and working to develop solutions.”

Back on the dive boat, Mick Baron hauls a rusted anchor from the depths of the Tasman Peninsula’s waters.

The future of his diving business is increasingly unclear.

“The rate of change that we see now is still going to increase, even if we stopped all the pollution … the snowball effect is already there.”

“So my grandchildren will never see what I saw,” he said.